Chiba boasts one of the largest industrial areas in Japan, specializing in steel, petroleum, chemical and machinery production. The Keiyō Industrial Zone situated northeast of Tokyo bay positioned upon a vast area of reclaimed land essentially amalgamates some 8 cities across Chiba. For productivity and economic wealth the area sets a shining example for growth and prosperity, for cycling it makes for a complete and utter nightmare. The air foul with exhaust fumes, articulated lorries chugging about relentlessly and motor expressways stacked nigh high and seemingly tying themselves into knots. It was every bit as vulgar as it needed to be. I would have to be on my guard as not to do my best human impression of tomato soup, or at the very least not to become addicted to carbon monoxide. 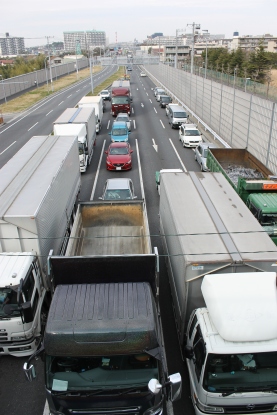 It was difficult to believe that one can traverse through an area for some 6 hours and still not even get the faintest glimpse of what one might consider to be the countryside. The sight of a rice paddy would have no doubt given me instant arousal at this stage, but the closest one can get to the country in the Keiyō Industrial Zone is an unfinished rice ball tossed from the window of a passing trucker.

Making it to Chiba City shortly before dusk I went to see the Chiba Port Tower, a 125.1 m lozenge-shaped structure thrown together in 1986 to commemorate the population of the prefecture surpassing the five million mark. The city itself today houses some 960,000 inhabitants, some feat when you think that nearly 70 years previously during World War II the city was virtually decimated by aerial bombardment. 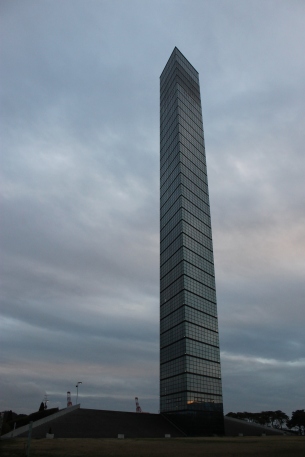 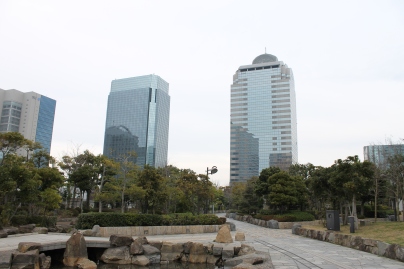 Away from the industrial whorehouse of Tokyo Bay, central Chiba seemed pleasant enough, a few parks encompassing the vicinity making for practical contenders for a nights stealth camp. Yet eagerness to keep pressing on got the better of me. I pressed on towards Kimitsu, a town I initially intended to be at by sundown. I got as far as Amegasaki before the heavens well and truly opened. If it was warm piss from the Gods above I would have been willing to continue, even during the dark hours, alas it was cold, calculating and heavier than a Christmas carol….. sung by Cradle of Filth. 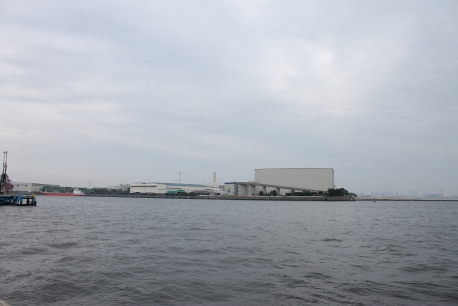 I found an underpass to shelter myself from the skies fluidity, a place for me to sit and reminiscence upon the day’s events. Memories that when moulded together into liquid format had the consistency of a sinisterly loose bowel movement. I’d also noticed that I’d already begun to soliloquize. Yet thankfully, I didn’t give a shit.