It was now a Tuesday and I was a day late for the resurrection, yet Christ’s grave looked undisturbed and I had an inkling that he was still sleeping.  Which I thought to be rather rude considering how far I’d come to visit him, yet alas he is Jesus Christ the son of God, so I guess really he can just do what he wants.  I stood atop a small hill in the unassuming village of Shingo, a sleepy little place with seemingly little agenda bar our saviour. Before me lay two large earthen mounds each consisting of large 12ft wooden crosses. Too my right laid the body of the world famous Jesus Christ, to my left, his brother… Isukiri! Now information on the existence of Christ in Japan is sketchy to say the least, yet a small sign board next to the grave site dictates that when Jesus was 21 he came to foreigner friendly Japan to seek knowledge of divinity. He would spend 12 years in Shingo before returning to Judea to spread the word of his divine knowledge. Now as we all know the Romans thought that Jesus was a bit of a gob-shite and thus decided to crucify him with immediate effect. Luckily for Jesus however, his Japanese brother Isukiri was a super nice guy and casually traded places with him directly before the crucifixion and nobody seemed that bothered, nobody. Jesus then in turn thanks to his kindly and sacrificial brother fled back to Japan where he married, had 3 kids and lived to the ripe old age of 106…what a guy! There’s a morale to that story somewhere, a really shit one at that. Yet it’s the eccentricity of the claim that draws the tourist in, well this tourist anyway. Even as a budding atheist I still felt the need to see this place. But looking around I gathered that not to many other folk had quite that same urge, I was alone with fake Jesus, but I didn’t mind.

Veering away from the open plains of Shingo I would begin to climb west up into the mountains toward Lake Towada. It was a rapid transformation in both terms of landscape and climes. From a flourishing agricultural heartland up into the snowbound highlands, within the space of a couple of hours the temperature would fall dramatically from 23℃ to a solemn 9℃. The air clean and sweet, yet cold and promiscuous as I happened across an old rest stop. A series of vending machines poked up out of the snow and restaurants and other miscellaneous outlets lay boarded up in abandonment. A gentle breeze disturbed a canopy of amply clad treetops as a stern overreaching branch scratched against the corrugated roof of an old souvenir shop. I’d arrived in a Stephen King novel.

A short stretch away lay the roughly 5 mile descent down the mountains to Lake Towada. Unfortunately it was at this point that I would end up throwing my toys out of the pram. The road to which would have taken me all the way down to exactly where I wanted to be was closed, a barrier blocked my way accompanied by a sign board caked in Kanji. I decided to test an iPhone app out on the Kanji to see if I could decipher what the problem was. The rough translation I got was ‘spinning elbows happy nothing’. It sounded ominous. The other problem being that I wasn’t being directed anywhere else, the road was just quite simply closed, just like that. I was less than double digits away from where I wanted to be yet I could do nothing about it unless I wanted to intimidate the mountain’s elbows. I shouted and cursed for a couple of minutes, venting being the easiest form of release. Jesus would’ve been spinning in his grave.  I then backtracked slightly, finding another road that seemed to run south. I couldn’t find the road on my map book but geographically speaking it wasn’t heading back out east to the coast from whence I came. I took a gamble on it.

The road seemed to run level for a while as I passed a few bleak and climatically challenged farmsteads before gradually descending. The views upon my descent the pinnacle of picturesque, somewhat marring the wind chill factor that was trying to eat me up. Gradually slipping down out of the apparent skyline into a baron and lifeless woodland before trailing close alongside a steady flowing river. The thrill of the descent would soon be overruled as I stumbled across a sign for Lake Towada that dictated almost double to what it did back at the road blockade where I threw my previous wobbly. That and the road was also creeping back up into the mountains again. So I had essentially gone back down one side of the mountain to inevitably be forced back up it on another side. This would seriously put my body to the test as I burned up further calories that I wasn’t in the position to foreseeably replenish. I said some more bad words.

And so I huffed and puffed, or more along the lines of cursed and….well, cursed my way back up the mountain before the trudge finally exacted its payment with the beauty of the great Lake Towada graciously presenting itself to me. It’s rich blue colour highlighting its prominence amongst the serenest of landscapes. At some 28 miles in circumference Lake Towada is the largest lake on Honshū island, formed in a caldera some 40,000 years ago by the eruption of Mt. Towada. Although still considered an active volcano its most recent mass eruption dates back some 13,000 years, so with that in mind I felt the odds were in my favour that I wouldn’t be experiencing a red hot molten shower anytime soon. Always a good thing. 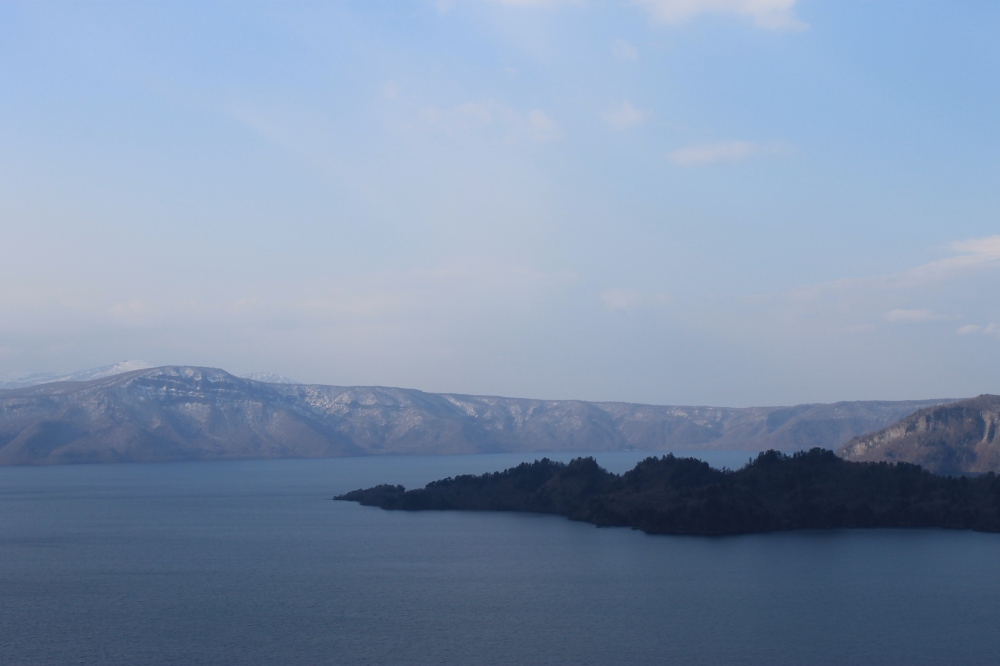 So despite being lead astray from my initial intended route I was still spoilt at the climax, this was important. I stood alone for sometime south-west of the lake upon a viewing platform absorbing the lakes magnificence, not a tourist in site. I was humbled. Yet with sundown not 30 minutes away I decided to descend down into the caldera to where I had pre-booked a night in a hostel. A hostel that was encumbered with an abhorrent conglomeration of Australian youths of whom it appeared lacked any form of social etiquette, fighting amongst themselves, breaking inanimate objects, stomping about the place whilst screaming and shouting at the elderly staff showing  about as much respect as what a fat-man might show a honey-glazed donut. This would however in no way, shape or form dissuade my hunger, the hostel offered a selection of overly priced pot noodles and cookies, the steep rates perhaps the reasoning behind the Aussie’s  impertinence. However, it was food that right there and then was most certainly ideal for the famished cyclist. I repetitively gorged into the night, like a modern day Henry VIII, but with less wives.

PS: If you’ve enjoyed myblog then you may enjoy my as of yet unpublished book of my venture around Japan. Something that with a little help from friends and strangers I’d like to publish for the whole world to see. Please if you have the time could you take a look at my Kickstarter campaign at: https://www.kickstarter.com/projects/675565076/tokyo-to-tokyo