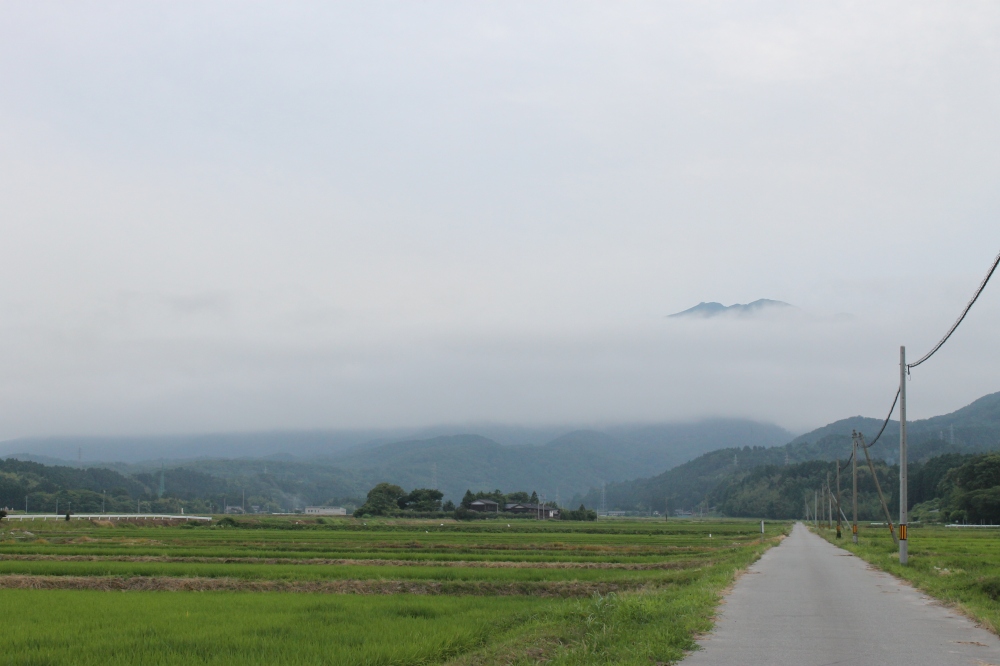 An evening boat would take me to Sado, some 30 miles west off the coast of Niigata. I’d arrived in darkness and quickly found myself an unkempt stretch of coastal parkland to set up camp. Sado is a place with a morose history, and that’s even before you consider the slave labour and North Korean kidnappings. For centuries, shamed emperors, political dissidents, outspoken poets, controversial monks and all-round rebels were sent to this remote island – as a form of punishment. To be banished here was a life sentence; very few saw the mainland ever again.

Cycling south-westerly through the Kuninaka Plains I cut right through the centre of the island between two rugged mountain chains that stacked-up either side of me. The stunning vistas made me wonder if being a shamed emperor would have been such a bad thing after all.

The Kimpoku and Kunimi mountain ranges respectively offered up a selection of abrasive looking peaks, caked in thick layers of vegetation. A harsh and unforgiving terrain no doubt and perhaps little explored, but a marvel to the eye all the same. Its highest peaks were mollycoddled in a white cotton-candy blanket of cloud cover, giving the mountains an added touch of mystique.

The road cutting through the rich and fertile centre of the island however was an equally inhospitable place, and far from mysterious. In little over 5 miles I’d nearly been maimed by passing traffic some 7 times. That’s 1.4 near death experiences per mile, an alarming statistic. The drivers of the island’s 63,000 inhabitants were presumably acting out an apparent real life rendition of the 1997 crash ‘em up video game ‘Carmageddon,’ whereby the more brains that get splattered across the road, the more points you gain. Alas, this was the same year that saw Final Fantasy VII entering the video games market, so I guess I should be at least a little bit thankful that I wasn’t getting pecked to death by a Golden Chocobo. Apologies for the blatant sidetracking here, but I couldn’t very well go and write a book about Japan without referencing the game of all games a few times, for that would be just plain sacrilege.

Upon hitting the coast and heading north, I would soon clash with the rugged terrain. Each steep and sweaty climb awarded with another equally steep and sweaty climb; it was going to be one of those days. I imagined that amongst all of this constant exercise, I would probably be able to get a job in a freak show when I got back home to England – my body having evolved into just a pair of quads with a face. Now who wouldn’t pay to see that?

Sado’s northwest would bring me to Aikawa, the home of Sado Kinzan, the island’s infamous gold mine. The first ore was extracted in 1601, which brought great prosperity to the Shogunate, and during its peak produced some 400kg of gold a year. But this came at a great expense to human life. During the 1800’s, many of Japan’s big and overcrowded cities were inundated with homeless people. To help out these stricken beings, the Shogunate gave a number of them a one-way ticket to sunny Sado Island, where the hours were long and the pay… well, non-existent. It was backbreaking work in hellish conditions and failure to comply rewarded the insubordinate with the loss of their head. Life expectancy was short and escape futile. The government however were laughing their cocks off; in just 388 years they’d managed to stack up some 78 tonnes of gold. 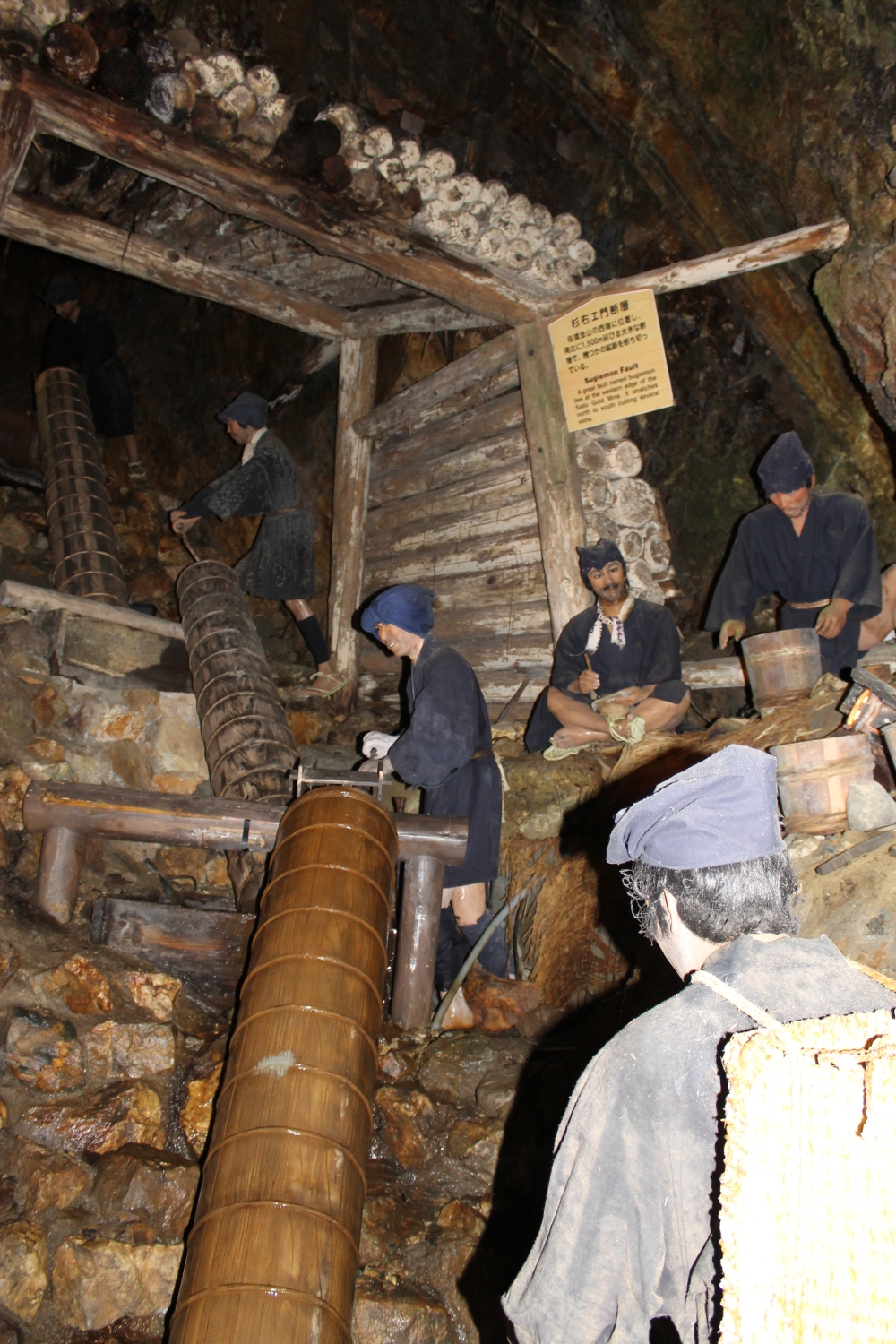 The mine today allows visitors to walk two sections: a modern mine that was used up until 1989 and an older mine that allows one to soak up a small slice of the hell that for so many years deprived mostly innocent Japanese citizens of a life. A number of robots are used to animate the harsh daily lives of the miners, from the removal of large rocks to the siphoning off of water to the earth’s surface. Conditions were most certainly always cramped and no place for a claustrophobe. A sign read ‘Please don’t touch the Roberts.’ I pondered upon whether or not if it might be okay to just touch one Robert, but to conceivably go on from there and touch up too many Roberts would perhaps be deemed somewhat taboo; socially unacceptable behaviour. And thus through a fear of being swiftly escorted to a secret third mine, I decided to keep my non-Robert touching hands to myself. 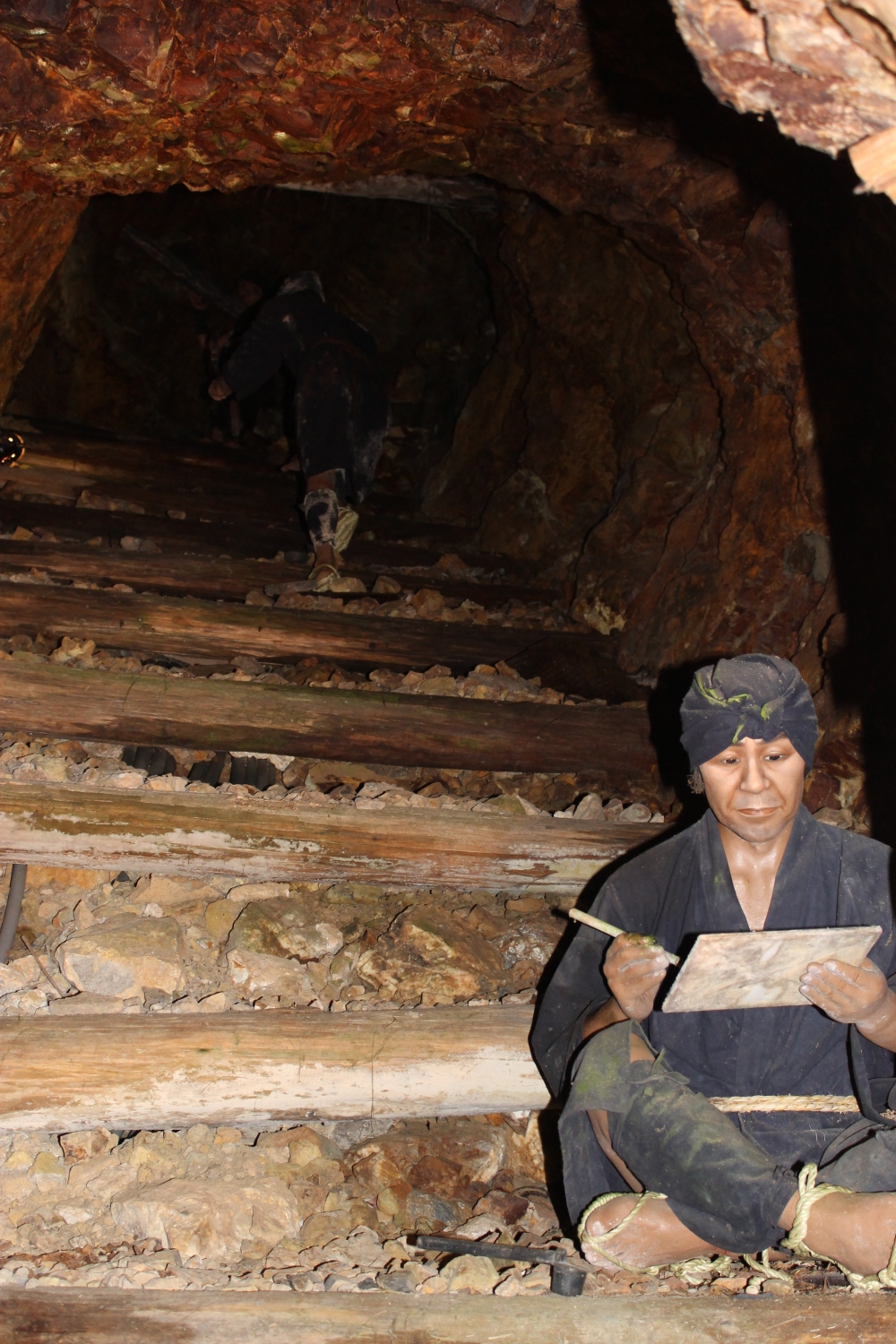 From Aikawa I continued in a clockwise motion around the coast; the traffic thinning out tenfold, allowing me to concentrate on the perpetually steep inclines. The turquoise waters of Senkaku Bay seemed alluring in the afternoon heat, yet deceptive as the ocean was still as cold as stone. Old, crooked-backed ladies tended to their coastal rice paddies as their husbands’ worked alongside them, strimming the banks.

Another rapid descent would take me down to sea level to Oonogame Rock, in the island’s far north-east. Here, at the end of an elongated spit branching out into the Sea of Japan, sits a bulbous, fist-shaped rock that rises some 167 metres. It looks awkward and misshapen; its steep cliff edges hanging out on a limb, magnificently battered by a millennia of hard hitting waves. From here yet another gruff and gradual ascent unfolded up into the mountains, before finally bringing me back down close to the water’s edge. I steadily found my way back and at dusk I sought out my previous night’s dwellings; an over grown park that seemed to me abandoned, wild and free.

‘Tokyo to Tokyo – A Cycling Adventure around Japan.’