Breakfast started with a brutal 10% incline which set the pace for the bulk of the day’s journeying, as I traversed Japan’s highest public road – amongst its abandoned summertime ski slopes. I wondered if I was insane to be lugging some 30kg of property up into the skies with me; nobody else seemed to be doing it. But then I thought of my entire plan again and relented that all of this had been my choice, so I just had to get on with it and stop doubting.

Again, it was a roasting hot day, and sweat built heavy upon my brows; long frenetic beads pouring down my face or seeping into my eyes, the stinging sensation unkind. My excretions would wet my drying, cracked lips, as the taste of salt became omnipresent. It was thirsty work, and I was having to rely upon the fresh mountain streams and waterfalls to keep my water supply replenished.

The deeper I ventured, the more I began to feel like the mountains were trying to smother me; they towered up high above me like giant myrtle-coloured fortresses. And with each and every grinding turn, came that all too familiar optimism – I might be close to the top of the mountain chain. As usual though, a long and drawn out tease was in order. It was only when the vegetation began to spread out, and a contingent of craggy, ochre-coloured rocks emerged amongst a jaunted precipice, that progress could be formally acknowledged. 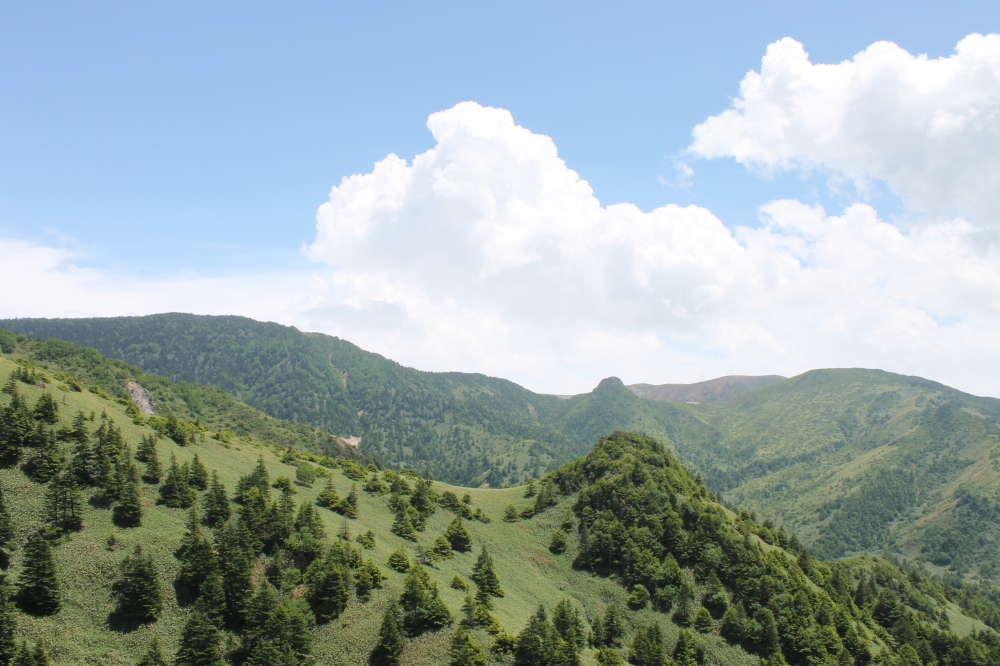 From a high enough vantage point, I could see a road levelling out along the jagged spine of a volcanic peak – Mt. Kusatsu-Shirane: the gateway to Gunma Prefecture.

I climbed a little higher, until I was above a vast swathe of cloud. At a junction, to the side of the road, a sign stated that I was at the highest point of any public road in Japan. And at a lofty 2,172 metres above sea level, the road ahead of me was completely bound in a thick mist. This would make my descent a little dicey. Yet somewhere down there lay the town of Kusatsu. To my south, a storm beckoned; clouds as black as night beginning to cast shadows across the land.

I began to descend with caution; my view becoming completely obscured the moment I hit the great wall of mist – the smell of sulphur rich in the air. Stopping briefly, I turned on my lights, before continuing into a slow and painful descent with my brakes constantly applied. I was in dangerous territory; seeing the blurry lights of passing and oncoming traffic almost too late on several occasions. Not being able to see a metre in front of me also made cliff edges extremely difficult to gage. It was an eerie sensation; like something out of ‘Silent Hill.’ Even when I eventually made it down into Kusatsu at 1,200 metres, the whole town was engulfed in the thickest mist I’d ever seen.

There, I sought out ‘The Worthy Bagel,’ where politeness and extremely hospitable etiquette tore me away from the town’s supernatural environment. At the entrance to her café, Mai Nakamura and her large family, greeted me. I felt like a celebrity – without the red carpet – as they led me into my very own welcome party. My bedraggled appearance was not a concern for the Nakamura’s, as they went on to treat me like a Rock Star; plying me with enough fine food and beer to sink a pedalo. Mai had owned her bagel shop for a couple of years and business was booming. Her husband Kenji and brother Akihiro also ran another couple of restaurants in town; they saw to it that I wouldn’t starve during my time in Kusatsu.

After a couple of hours of socialising with this kind and generous family, it dawned upon me that today was one of the most physical of my campaign and that I barely had another 5 minutes of energy left in me. Thankfully, Mai – a caring mother of two daughters – suggested I take a bath and then hit the hay. I obliged willingly.

Total time in the saddle: 326 hours and 30 minutes

‘Tokyo to Tokyo – A Cycling Adventure around Japan.’