It was only typical that the weather should shit itself the day I decide to go on my little excursion, thus stalling me from the early start I had initially intended. The plan today being to head out from March to the Norfolk coast. Eagerness got the better of me however and with what seemed like the best part of the rain receding to drizzle I decided to make a break for it mid-afternoon. My mission simply being to sample the tour biking life for the best part of the week before throwing myself in at the deep end next year with a tour of Japan. 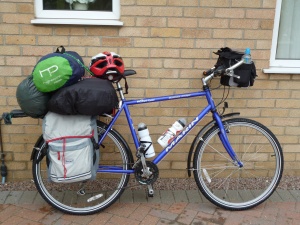 And you have to bless the Fen roads for easing a person into the realms of physical exercise for I haven’t had a good workout for the best part of a considerable amount of time now. That is of course assuming that we aren’t counting button bashing on the XBOX and the more than occasional visit to red tube. With the flats of the Fens I was pacing my way towards the coast at an average speed of 9.4mph. Which for some I understand would consider massively tedious going, but then one has to take into consideration the sheer baggage of which I was dragging along with me. I packed heavy to see how well I would cope, carrying enough tinned food to see me out for at least 5 days. The load would obviously get lighter as days went by and I hoped that in general I would build upon my pace as the days progressed and become fitter as an individual.

I eased 25 miles or so to King’s Lynn easy enough. Coercing the well distributed cycle lines through the busy town centre out to Castle Rising. As I neared the grounds of the Queens holiday home in Sandringham I began to lose light and the rain had started up again. I began to keep my eyes peeled for suitable camping habitat. I did happen across some sort of caravan camping club in the woods early on which appeared to be dominated by a more mature audience than myself, people who had established themselves as a people and were no doubt willing to shell out hundreds of pounds to camp in the woods for the night. I however wasn’t willing to shell out any pounds to set up camp, the badgers don’t pay to sleep in the dirt so neither shall I. I was also weary that it could be some sort of elderly person’s swinger’s convention and I didn’t want to get bummed in the night by someone’s Granddad….again. 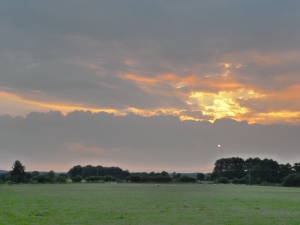 Moving away from the Sandringham Estate I ended up finding what appeared to be a small copse on the outskirts of Snettisham where in an effort to not draw attention to myself I would have to make camp in the dark as I wasn’t 100% if the copse wasn’t just somebody’s back garden that I was intruding upon. A midnight hatchet to the face would be all so standard on my first night in the Norfolk wilds.