I slept uneasy though; the noise from the docks was prominent throughout the night. A seemingly 24-hour operation; ships being loaded and released of their cargo as an arrangement of sirens and horns sounded out continuously. As dawn began to slowly creep in, the low light projected an army of ants trailing up and down outside my tent. I watched them monotonously and just when I felt as if I was about to nod off, I suddenly bolted upright, shaking off my trance. 04:30am, I’d lounged around for long enough. My journey north was to continue.

Heading out of Monbetsu, I was again to be subjected to another one of Hokkaido’s consistently straight roads, one that seemed to melt into the horizon and offer very little hope of curvature. My surrounds though were far from pedestrian; to my right lay the sea of Okhotsk, its salted breeze gentle and fresh. And to my left, a landscape very reminiscent of the Scottish Highlands: green wavy hills, boggy marshes, craggy rocks and a pint’s worth of midges heading directly for my eyeballs.

The road was to eventually spoil me rotten by offering up a bend and before long, as a set of heavy dark clouds began to loom, I would make it to Hamatonbestu, the last frontier before Wakkanai, Hokkaido’s northern most city.

Over a can of coffee outside a Seicomart, I started talking to a Japanese tour cyclist who that day had set out from Wakkanai. He confirmed that the weather there was very wet, windy and cold. And upon that confirmation I did not think that I would be able to make the final 50 or so miles before sundown. 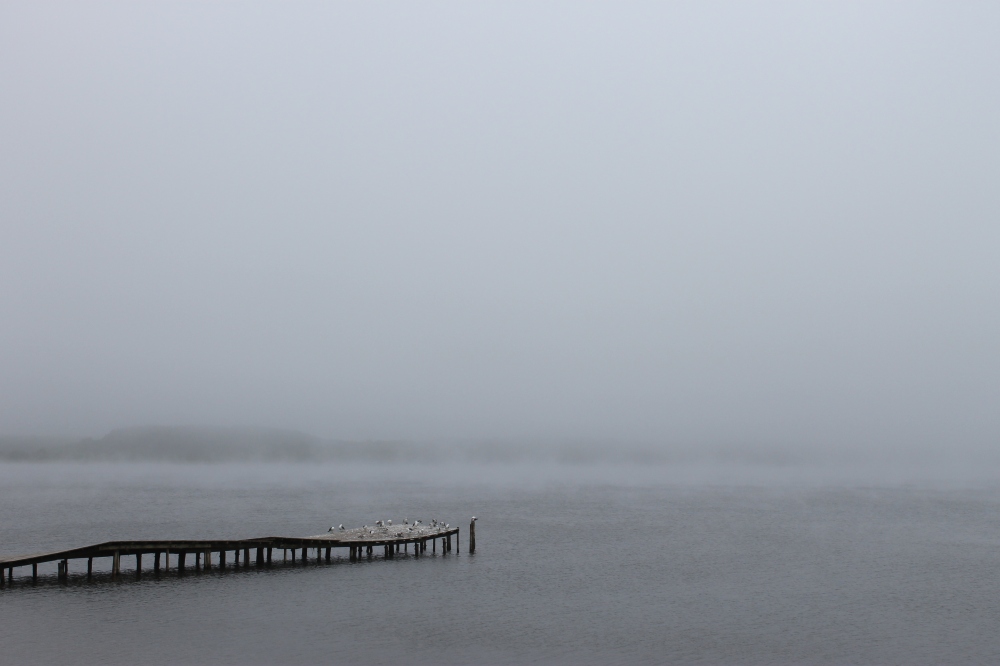 However, on the outskirts of town lay a spot of luck – Kutcharo Lake. It offered convenient and free camping, though an eerie mist clung to the lake upon my arrival. Close by, a group of gulls gathered around a broken jetty, preparing to roost, they too had given up for the day. And as the drizzle turned to rain, I’d just about finished preparing camp before huddling into my sleeping bag – with a packet of crab flavoured crisps and some fine 20th Century literature. For tonight, the rain wasn’t going anywhere, and neither was I.