I awoke cold and damp, I hadn’t jizzed myself, unfortunately things never got that far. But my tent was to prove that it wasn’t the watertight vessel that I’d hoped it would be. In fact, it was shit, just plain shit; a little like water torture. Yet, for now, the rain had lapsed and the skies sat wearily overcast. I wiped down the inside of my tent with a cloth, in an attempt to absorb a bulk of the moisture, ringing the cloth out frequently. My schoolboy error lay in the fact that my far from suave pop-up tent was only a one season tent, summer minus the rain. I’d need to invest in a waterproof flysheet as soon as possible or face a prominently wet future.

Cycling north along the lake, I came across an old railway line that had been converted into a cycle path. Through a melee of woodland and arable settings, I passed the remnants of long defunct station platforms; the road elevating slightly to offer a panoramic view across the lake. The lake’s boundaries though were still undefined by a low-lying band of mist. The further away from the lake I got the more dense and decrepit the forest path would become. Vegetation splayed itself out errantly before me; my legs getting slapped by huge wet dock leaves and my face whipped by a foray of spindly outreaching tree branches. The path came to an abrupt end at a forest; with no road signs in view, I was left to navigate via compass.

Upon leaving the forest, I found myself someway inland, but knew that heading directly north would bring me to the coast. Unfortunately, the inland roads were being perversely cruel, a bulk of them giving me a glimmer of hope before suddenly turning 90° on me and leading me astray. My saviour was to come in the shape of young Japanese farm labourer who jumped out of his truck and bundled a couple of hot cans of coffee into my hands. I took this golden opportunity to ask where I might be able to find the road to Wakkanai. He looked impressed with my Japanese and then began to speak at about 400 million miles per hour, assuming that I was a native speaker. I was thankfully able to pick out a few key words though, ‘next left,’ ‘5km’ and ‘ocean’; all I really needed to know. I thanked him for the coffee and directions, before shaking hands and departing. How did he know that I needed coffee? ‘I love this country,’ I said to myself before nearly turning right at a crossroads – instead of left.

A short while later, I found myself back on the coast; a brilliant sea mist enveloping me as I found the road toward Wakkanai – it was all so beautifully creepy. Inside this big, thick, white blanket of obscurity, I could hear the ocean waves crashing against the shore, the occasional hum of an approaching vehicle, accompanied by a blurry frenzy of oncoming lights. Within a few moments, I was in a bright, clear and spellbindingly beautiful summer’s day. It was an extremely odd transition as I stopped to look back over my shoulder at this intriguing natural illusion. The abstract wave of mist continued its purge inland, devouring the foothills of the nearby mountains and creating a floating world effect, that was like something out of a Final Fantasy video game. I was impressed.

Ahead of me now the skies were clear as I continued to straddle the coast toward Wakkanai, stopping for a compulsory break at Cape Sōya. It is here that many a mad person – when cycling across Japan – both starts and finishes their journey. I was to meet and congratulate several other cyclists during my short spell there, customarily we would take photographs of one another posing alongside a big pointed monument that declared Cape Sōya to be Japan’s ‘Northern Most Point’. This is a bit of fib, and I do hate to come across as meticulous – but about half a milenorth-westerly from Cape Sōya sits the uninhabited island of Benten-jima, this actually is Japan’s northern most limit… just saying.

Rounding the Cape and heading along the Soya Bay, one sees a colossally prominent structure some 30 miles away, towering up out of the ocean. Mt. Rishiri is a dormant volcano which rises to 1,721 metres and looks a lot like Mt. Fuji. In fact, its nickname is Mt. Rishiri-Fuji.

Rishiri, and its smaller, low-lying neighbour, Rebun are two islands that make up the Rishiri-Rebun-Sarobetsu National Park, (try saying that with a gob full of Monster Munch!) both of which I intended to conquer visit. Whether or not I was up for trekking to Mt. Rishiri’s apparently awkward summit was still up for debate, but whatever my decision, I knew it would be spontaneous.

Making it to Wakkanai, I made a mad dash for the ferry terminal. Upon arriving there at 15:19, I discovered that the last ferry to Rebun for the day would be departing at 15:30. It was at this point that I began to panic, losing every thread of my Japanese language in the process, whilst trying to explain to the buxom young lady at the ticket counter that I wanted to go to Rebun. Fortunately, she had an excellent grasp of caveman speech and, before I knew it, I was being whisked away onto the ferry with my trusty stead, happy at how well my pure blind luck had just played out.

Passing the mighty Mt. Rishiri en route to Rebun, I became instinctively put off by the idea of scaling it. A blackness descended over the island at the volcano’s peak, yet over on neighbouring Rebun, the skies were still clear and welcoming; just like the Seicomart was upon my arrival at the small island’s port. 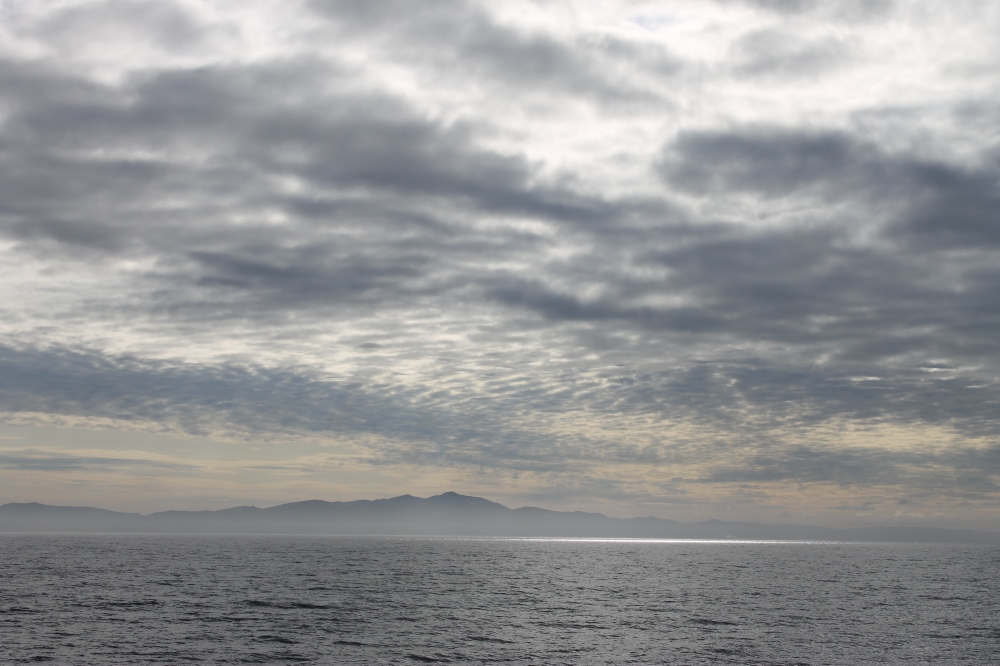 Grabbing that vital beer and that equally vital box of fried chicken, I sat down upon a sea wall and watched a storm gather speed over Rishiri. With any luck, the storm would get all its atrocities out of its system before I took the ferry over tomorrow. I took a few more sips of my brew as the gloomy clouds began to progress steadily towards Rebun. The sips turned into big messy gulps as I decided that shelter was a pure must. In Japan without a reservation one is often pushed to find accommodation, such was the case with titchy Rebun and thus I would be forced to camp. My decision to jump on the ferry to Rebun was somewhat of a rushed one and now my undoing seemed imminent.

Seeking out the Midorigoaka camp site, a short ride north from Rebun Town, I threw up my sack-of-shit tent. My only modification for tonight was in the form of covering for one side of the tent: my waterproof poncho. On this side I would lay my head, the rest of my body would just have to get wet.

Then… it began to rain.