No longer considered a typhoon, but still an unprecedented threat, ‘Severe Tropical Storm Nakri’ – as it would become known – was bang on course for Shikoku. According to the Japanese Meteorological Agency, it could well be with me by lunchtime. This would lead to a change of plan, as traversing the coast would now be deemed suicide, yet so could my other option – the mountains. The Shikoku range to my north had long been something that I would have rather avoided, but with limited opportunities for a roof over my head, Matsuyama would be my only chance of refuge during the onslaught of a severe storm. Reserving a room online at a guesthouse, would however officially condemn me to the mountainous task ahead.

I slept for a few hours in the Manga Café, getting up shortly before dawn to prepare myself. It was humid outside and still dry. Heading out early enough would ideally see me halfway through my journey before the storm caught up with me. I crossed my fingers.

One mile later, it was pissing it down. I sought shelter under the eaves of a Lawson’s convenience store in the town of Ino, where I took it upon myself to get some breakfast. After a short wait and with two coffees drained, the rain suddenly ceased. Quickly I hopped back in the saddle with a bag of donuts and progressed a little further. Just five minutes on, and it was pissing it down again. This time I found refuge at Ino’s train station. The rain was so heavy that I literally had to ditch my bicycle to the ground in the station’s car park, whilst I ran inside the station and under cover – myself clearly taking precedence. I also had to keep my donuts dry.

Thunder cracked above as the mountain tops to the north became shrouded in a grimy, dark mist. I watched for about 10 minutes; the rain relentless. I took a seat in the waiting room, trying to read my book. It was going to be a long day, this much I already knew.

As the heavy rain persisted, my reading suddenly became disrupted by the sound of an air-raid siren blaring out from somewhere in town. This was alarming to say the least and at first I had no idea what it meant; there was no one in the train station to ask. I went and looked outside, the rain was absolutely hammering the town. A town doesn’t just simply issue a warning siren for no good reason. Logic told me that ‘Severe Tropical Storm Nakri’ had already landed.

I cursed my luck and went back to my book, reading the same words over and over again. My brain refused to process anything, so I gave up. After an hour, the rain would reluctantly clear up, and with it the warning sirens faded. I made a break for it.

I played hide and seek with the rain for the next 4 hours, as I coerced myself further north through a valley, alongside the Niyodo River. Its banks swelled up fast; huge tree branches, plastic materials, car tyres and other random items all floating rapidly down the river. Farming plots by the banks of the river were beginning to flood, as water levels crept up to the doors of a row of parked farming vehicles. Things were getting pretty wild.

Approaching the town of Ochi, the randomly dispersed lashings of rain were now beginning to catch me out. A tunnel though saw me catch a break momentarily, before earmarking my next disaster for the day.

Route 33, which should have guided me all the way to my destination of Matsuyama, was cordoned off. This wasn’t good, not good at all. A series of luminous yellow and orange road blocks stood in my way, along with a traffic controller in a big white anorak who was waving his baton at me as I closed in on him. He was already shaking his head; I knew my chances of getting past him were going to be nigh on impossible.

‘Matsuyama ni ikitai,’ I said hopelessly. I want to go to Matsuyama.

‘Kono michi shimete desu,’ he replied, lifting up his arms and showing me his irons; rain dribbling furiously from the hood of his mac. This road is closed.

‘Hmph…demo, ima nani wo shimasu ka?’ I asked. Hmph…so what do I do now?

‘Err…chotto matte kudasai,’ he turned and went to find a colleague.

Being some 20 miles north of Kochi City now, I was adamant that I would not return, I’d rather shit myself at my own wedding, than cycle back upon myself now. I’d already come too far.

I watched two men in their huge white anoraks have a debate in the pouring rain. There were lots of words and head shaking and when the traffic controller returned, I already knew the answer. Up came his arms again to form a big ‘X,’ thou shall not pass.

I huffed a little but it wasn’t his fault, he was just the middle man and there was a damn good reason why the road was closed. In the mountains of Japan, landslides, flooding and death are frequently rife during periods of heavy rainfall. Yet here I was, the stupid idiot, trying to get in, knowing the risks that I could face.

I retreated back to the nearby tunnel where, under shelter, I pulled out my map book. Running my finger down the index page, I found Kochi Prefecture, page 26. Quickly darting to the supposed location of page 26, I could find only pages 24 and 29, everything in between bailing on me. ‘Oh for fucks sake,’ I bellowed out, my cursing echoing all along the tunnel, in sync to the rumbling of thunder. I threw the map book across the road and then quickly went and picked it up again. Maybe one day it might actually come in handy. Pissed off, I cycled a little further along into Ochi and found a convenience store and again some shelter from the endless lashings of rain.

Inside the conbini, I grabbed a map book from the magazine rack and stood in a row of variously aged gentlemen who were all reading comic books. The map book of course was all in Japanese, but with a little initiative I was able to find my current locale and, more importantly, a way out of my current predicament. As expected, it wouldn’t come easy. A turning off just out of town would take me up onto a mountain road that seemed to zigzag across the Shikoku range for an eternity, before dropping back down onto Route 439. In theory this should guide me back onto the very much currently closed Route 33. It would come at huge peril of course, and before I set out I knew that it was going to be one hell of a gruelling task, many a mountain pass being in ill condition and rarely maintained. Signs would also be thin on the ground, often gifting an element of uncertainty to the actual road’s destination. Also, these roads could be closed. Why wouldn’t they be? Yet at 10am, having managed just 20 miles in some 5 hours, I still had some 70 more miles to achieve. I had to get moving. And thus my own stupidity would urge me forth. Fuck it, I thought. I’m going to Matsuyama even if it gets me killed. It being the biggest city in Shikoku, I’d still have to go there anyway – even in a body bag!

Finding the start of the Route 18 mountain pass would of course lead me to another road blockade. This was unmanned so I’d sneak past without issue.

It was a gentle ascent at first, the road narrow and well maintained, yet soon to be challenged by the return of some cumbersome rainfall. Torrents of water flushed out of the surrounding forests, forming rivulets on the road’s surface, which I had to forcefully cycle against. Water now crashed down upon me from above and below; I wished I’d had some mud guards! 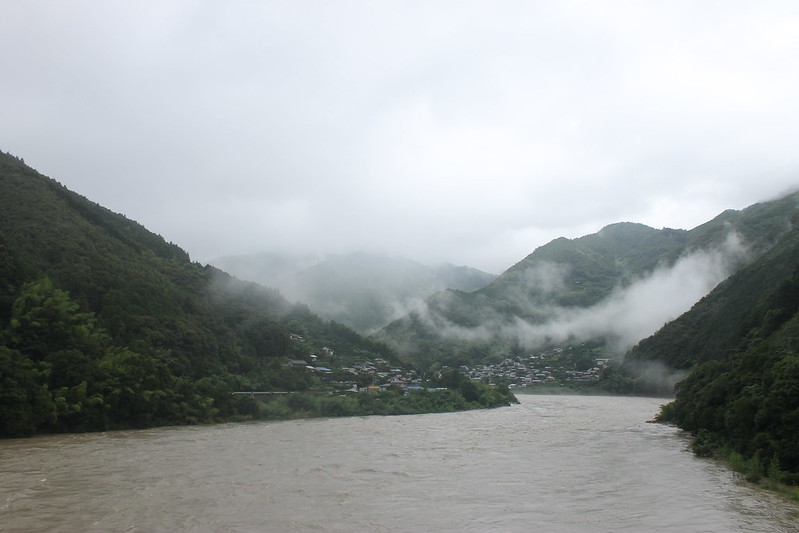 Thunder growled fearlessly from the rafters as the mountain road began to shrivel in size to something more consistent to a mountain path; becoming ever narrower, steeper, trickier and all the less inviting. I was beginning to wonder if paying heed to those initial warning sirens back in Ino might have now been a good idea. A bit too late for that now. No longer finding myself playing a game of cat and mouse with the elements – Mother Nature was now firmly in control, as she pissed all over me. Soaked to the bone, I couldn’t possibly get any wetter, the only way now being forward, regardless.

My bike wasn’t enjoying the occasion much either: a horrible creaking noise began to resonate from the front axle, my brakes absolutely drenched began to fail and the electronic display screen of my odometer was filling up with water fast – its numerical digits slowly fading to a nothingness. A certain stench of doom lingered upon the horizon, I certainly didn’t want another Norikura Skyline incident.

The more I climbed, the more the road twisted and turned. Then, I came across a small settlement tucked away precariously amongst the mountains, that reeked of self-sufficiency. Rickety little houses bundled together tightly, alongside a cliff face – amongst tea plantations, rice paddies and varying other crops that ascended up high into the dreary mists above. An insanely attractive sight to behold in such extremes. I passed an old lady bent double to the side of the road, tending her crop; she was weeding with one hand and an umbrella in the other.

‘Konnichiwa,’ I offered upon passing.

She nodded back in kind, smiling sweetly with a toothless grin. She was as hard as nails.

Away from the settlement, I hit a fork in the road, each path no doubt leading to someplace mythical; unknown to mankind. Both paths were decrepit, extremely steep and completely void of signage, yet both tore off on a tangent, further into the remotes of the mountains. Left, right, left, right…err…left! Probably! My decision was made on gut instinct.

The old path was steep and covered in wet moss; my tyres began to lose traction, slipping often. It was now that I began to worry slightly, finding myself paying attention to every little noise that pitched out of the surrounding forests. The water oozed passively out of the sides of the mountain, bringing with it traces of earth and debris; if a landslide was going to happen, then this was the place, and if it did… I wouldn’t be found for weeks.