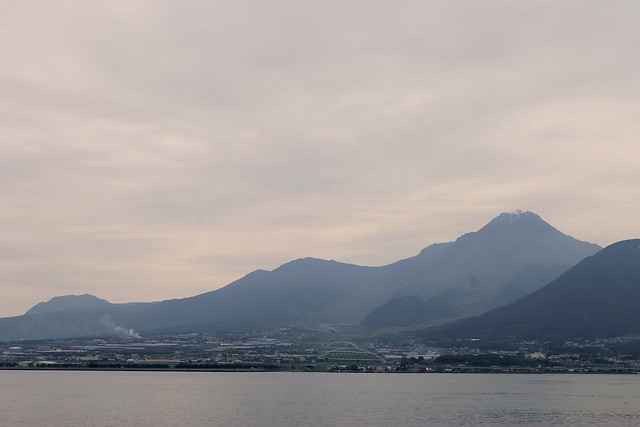 The ferry across the Ariake Sea to Shimbara took about an hour, by design I was the last man on and the last man off the vessel. Mt. Unzen leered dauntingly over the city upon my arrival, as I prepped my bike for the road. I headed through the busy town’s high street and out into rural Nagasaki prefecture. The rice crops – a mixture of greens and yellows – illuminated the surrounding landscape as the background was eaten up by the dark and menacing outline of a fearsome set of mountains. Straddling the coast, I avoided these harbingers of doom as I made for Isahaya in the centre of the prefecture. 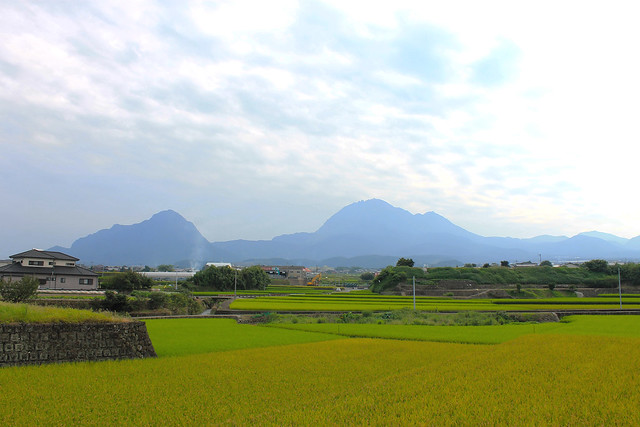 Arriving just before nightfall I was in a good position to make it to Nagasaki City in the morning – just some 20 miles away to the south-west.

For a Saturday night, Isahaya was about as lively as a morgue. Cycling through its uneventful streets in the darkness, I stopped off at a supermarket to get some late night deli counter deals, and in doing so, I happened across some much needed light entertainment. Propping my bike up against the supermarket window, I noticed an elderly gent who was practising an imaginary golf swing. On a nearby bench sat an open jar of sake. He wobbled as he sliced the invisible ball into the night sky. I quickly snuck past him and into the supermarket, just as he was looking to the skies to see where his invisible ball was going to land. Throughout my life, I’ve always had this massively talented ability to attract the eccentric… and the drunk. So as I escaped the drunken night golfer – on this occasion – I knew deep down that it wouldn’t be long before he inevitably caught up with me, for it was fate, plain and simple.

At the deli counter, I grabbed a couple of discount boxes of sashimi and went to exit the store. Just as I was about to leave, I felt the sudden urge to make small talk with the urinals, so I headed over to the toilets – an instantly regrettable idea. Inside was the aged drunken golfer extraordinaire. The problem was there was only one urinal and it was in use by the said drunk. Upon noticing my presence, he instantly turned towards me. Now I didn’t look directly at ‘it’ per se, but I was more than aware of a certain fleshy item peeking out from between his legs that appeared to be leaking fluids. I jumped instinctively backwards into the wall, to escape its dribbly wrath.

‘My…my power swing,’ he continued, as he began to demonstrate his technique.

It was then that it dawned on me that he wasn’t actually apologising for nearly pissing on my shoes, but more so for his lacklustre imaginary golf swing. I mean he had every right to be concerned, as he wasn’t arching his back enough for my liking – but considering the circumstances that wasn’t really the point.

‘Ok, well  err…ganbatte ne!’ I left sharpishly, nearly tripping over his bottle of sake on the way out, suddenly not needing the toilet so much after all.

It was a bizarre incident, just when I thought I’d seen it all. I cycled round the corner – laughing it off – before finding a set of swings in a dark and weed infested playground. I sat on one of the swings and scoffed my sashimi, looking over my shoulder from time to time to make sure that there weren’t any drunks around, practising their slice or any imaginary golf balls heading in my general direction. Thankfully there wasn’t and I was very much alone.

After my late night dinner, I set up my tent atop a disused skate ramp. And as I lay in the black of night, the tree tops around me began to rustle and creak as a steady wind set in. When I closed my eyes, I saw drunken Japanese penises everywhere and they were coming straight for me. I slept uneasily.