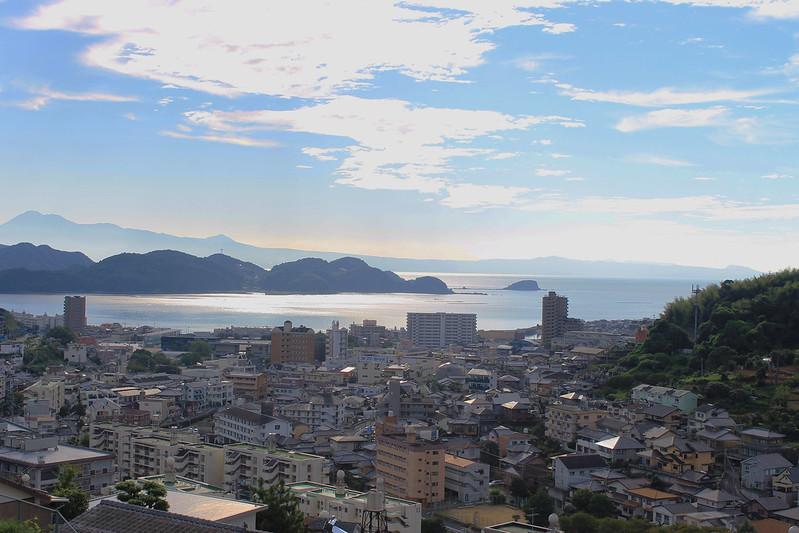 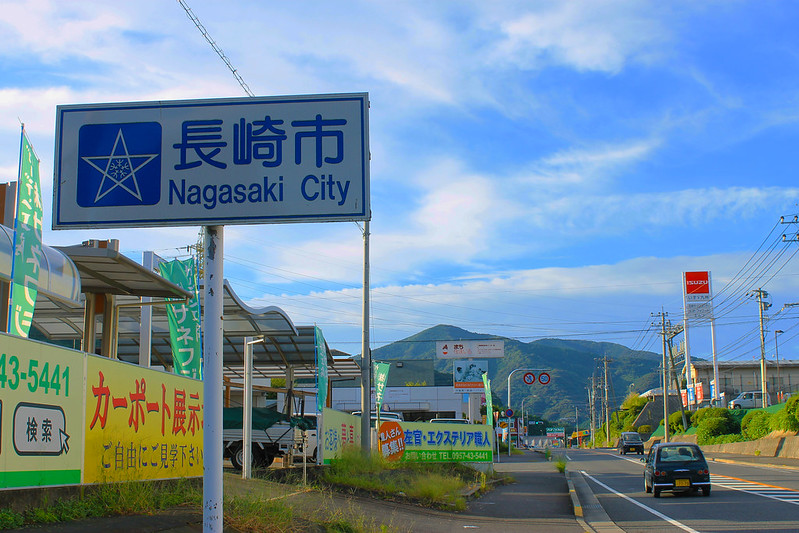 The ride into Nagasaki from Isahaya was short; climbing over the mountains to the east I would descend down into the heart of the city for breakfast. It’s a city that rarely needs an introduction, being only the second ever city in history to face nuclear demolition. At 11:02 local time on 9th August 1945 – just 3 days after the bombing of Hiroshima, the American B-29 Bomber Bockscar released the ‘Fat Man,’ a plutonium bomb with the critical impact of 20,000 tonnes of high explosives. The bomb would incinerate 40,000 people instantly, another 40,000 would follow in due course from the side effects. These ranged from severe burns, radiation sickness, leukaemia, malnutrition and a whole array of varying other chronic and debilitating injuries. 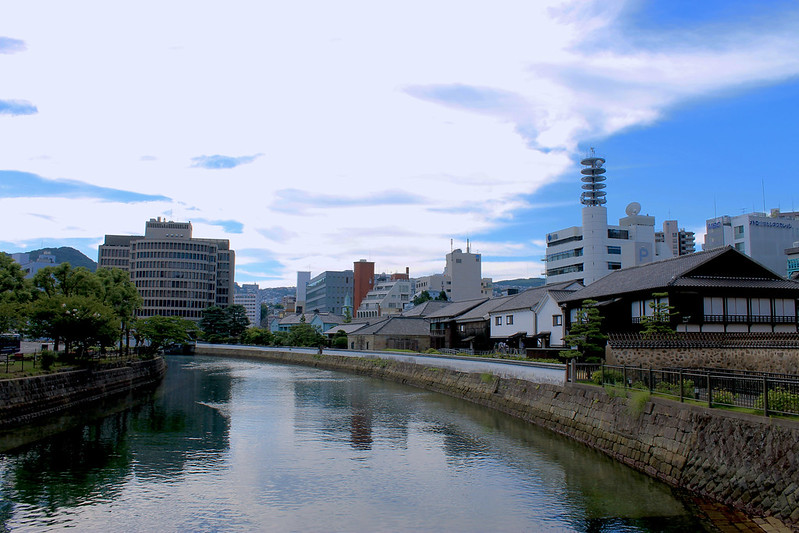 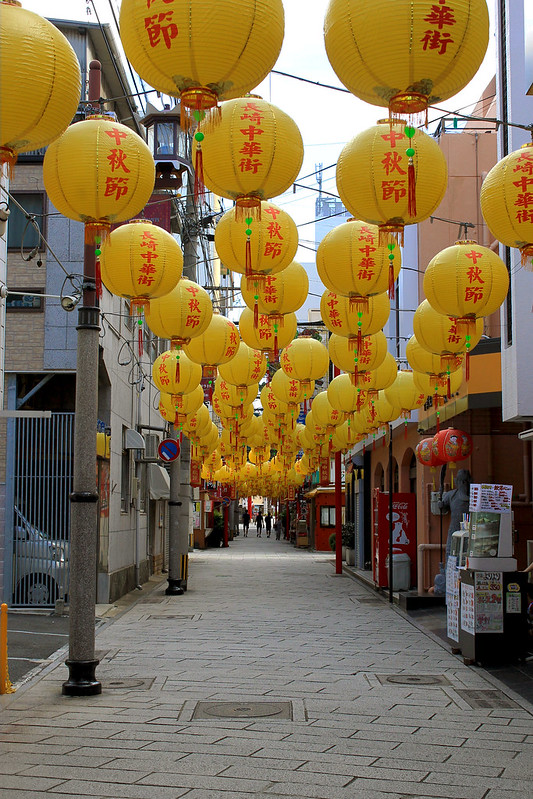 The bomb, although more powerful than the ‘Little Boy’ dropped on Hiroshima, did less damage, due to the area’s uneven terrain. Locked in amongst the mountains – visibility from the skies at the time of the bombing were poor and the actual bomb itself missed its mark by some two miles. Yet the bomb would still cause damage on an unprecedented scale, flattening whole neighbourhoods, torching crops, blitzing the dock yards and destroying many remnants of the city’s once cosmopolitan past. 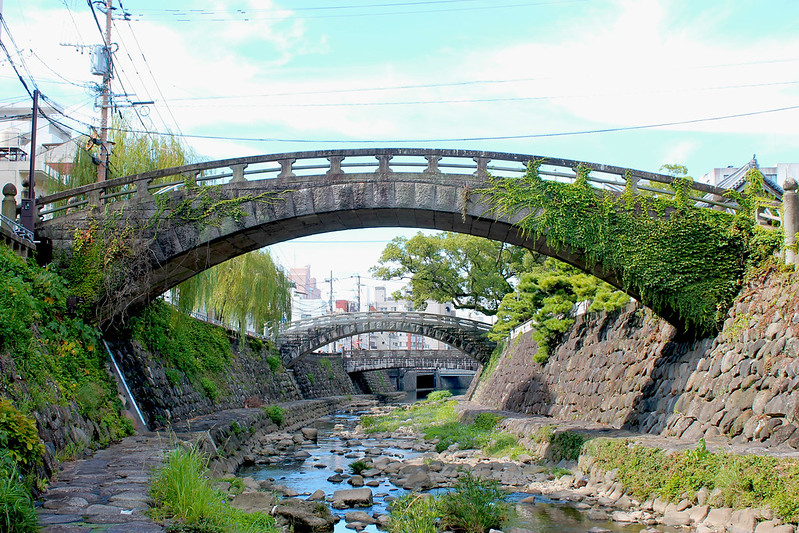 Six days later, on August 15th – Japan surrendered; marking the end of World War II. Cycling through the city in the glorious sunshine and around its affluent port area, with its scenic backdrop of Mt. Inasa, I again struggled to come to terms with the fact that this vibrant city – like Hiroshima – was once turned inside out. 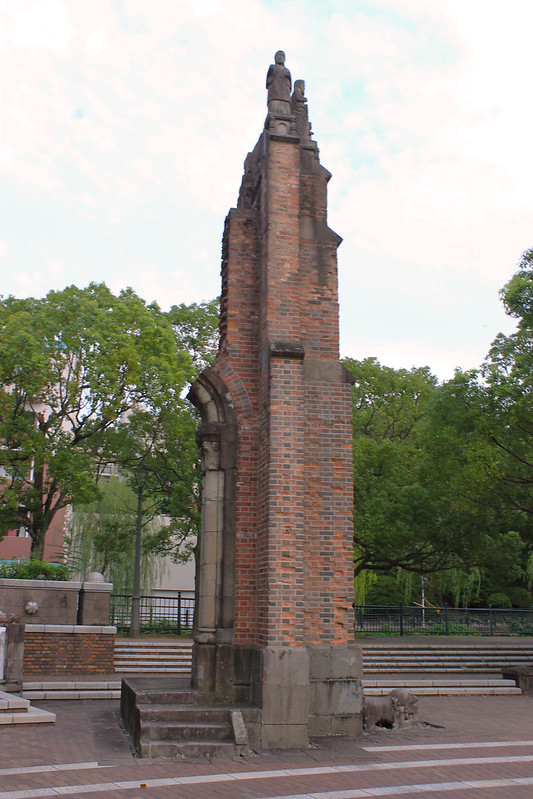 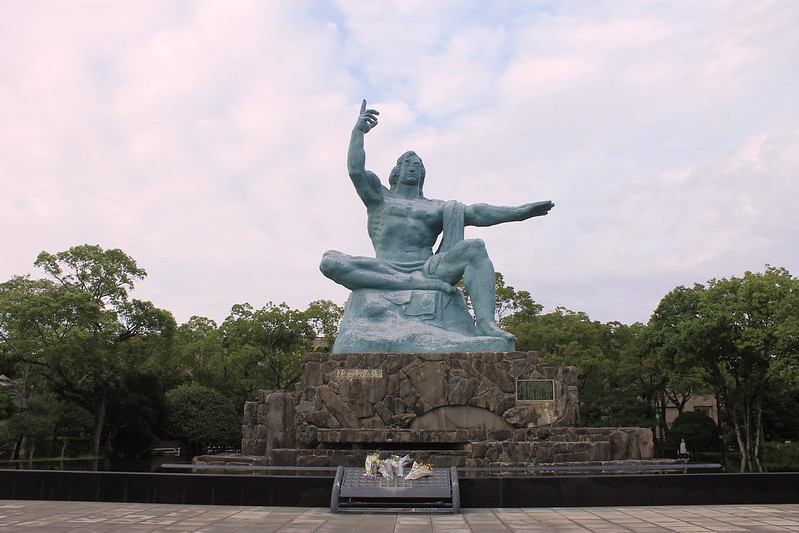 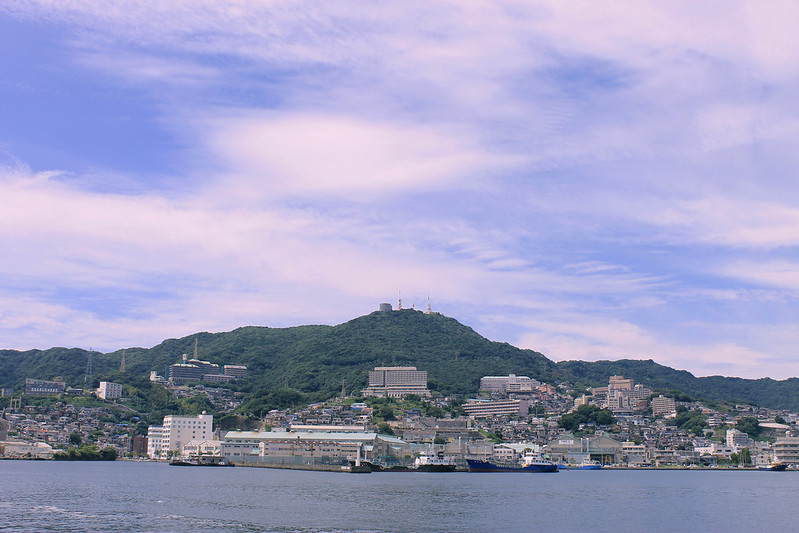 Heading over to the Peace Memorial Park, the site of the hypocenter of the bomb, would spell things out a little more clearly. Here one can find remnants of Urakami Cathedral, a solid stone structure that, at the time of the bombing, must have been tossed around like a child’s teddy bear, in the jaws of a rabid Rottweiler. The cathedral was also a link to Nagasaki’s longstanding relationship with the West that dates back to the 16th Century, when Portuguese Jesuits first came to its shores, to spread the word of Christ. They also traded produce, thus making Nagasaki one of the first cosmopolitan cities of Japan. 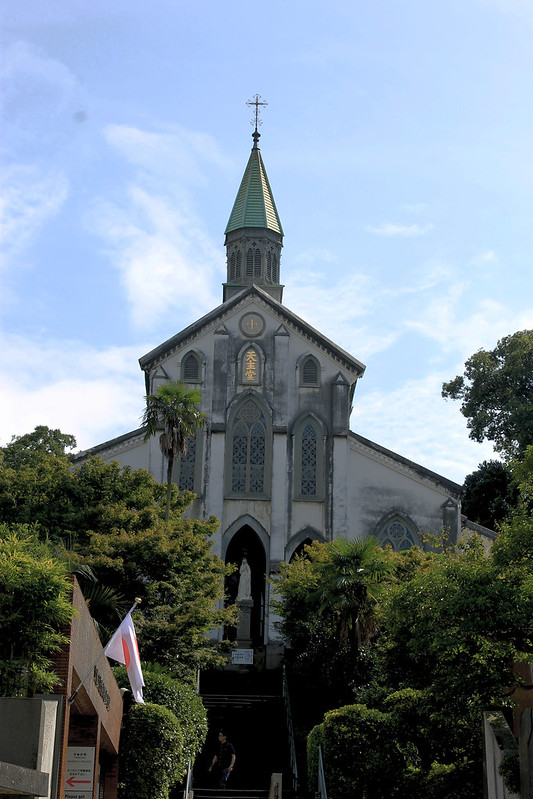 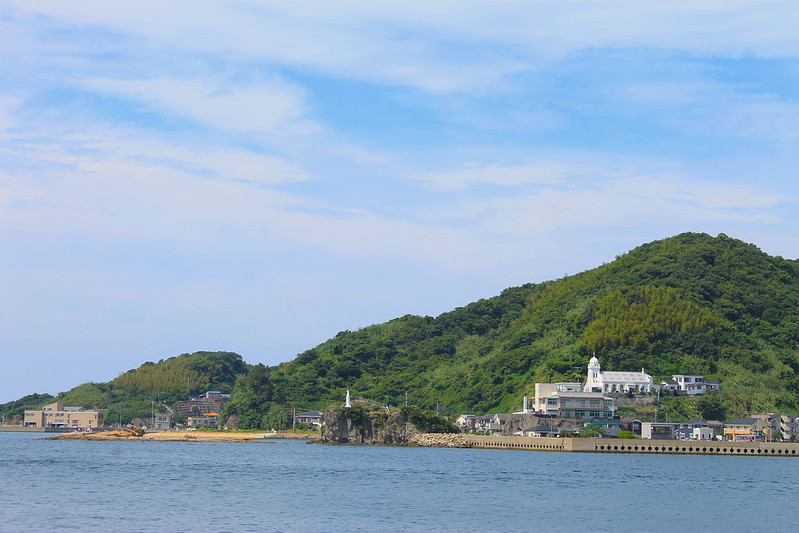 To see the city flourish like it clearly once did – walking hand-in-hand with the West, signifies the epiphany of peace and reconciliation that was and still is so important to Japan and the rest of the world post 1945. The past cannot be erased but the future can be altered, so that we never have to see a repeat of that fateful day, back in 1945, for rest of eternity. 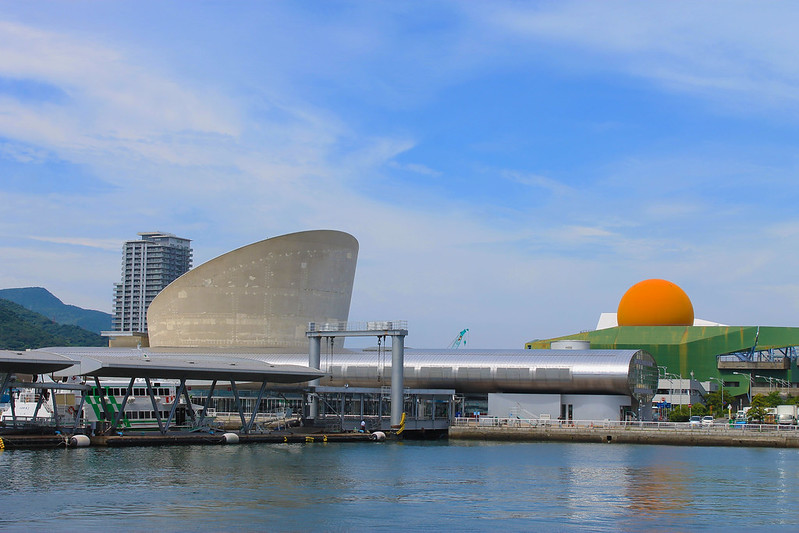 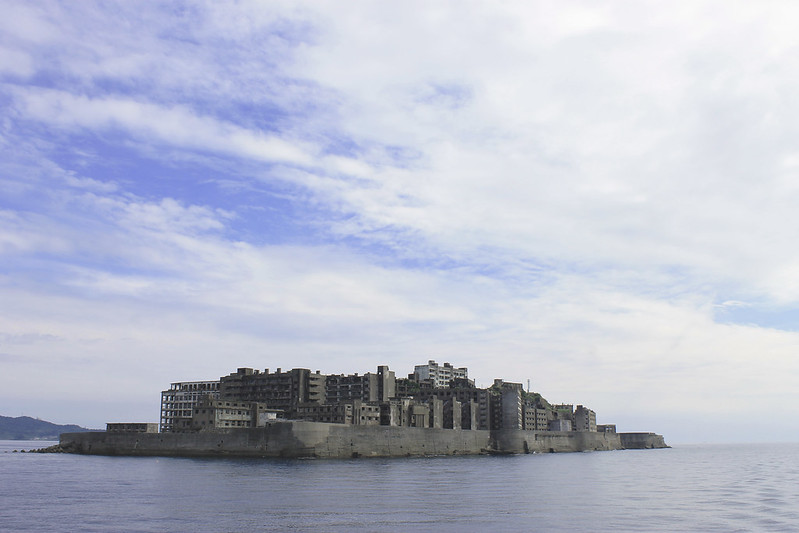 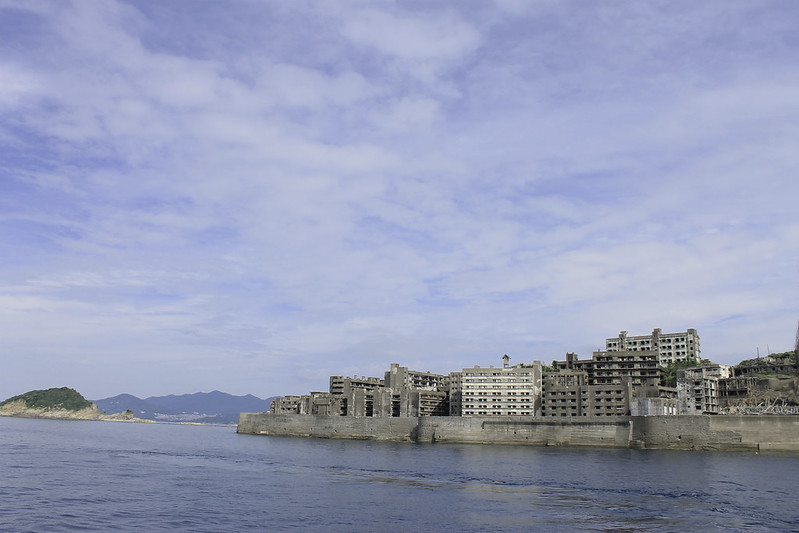 Just off the coast of Nagasaki was a place of great intrigue to me. Gunkanjima, a.k.a. Battleship Island. It is a small rock just 10 miles from the port of Nagasaki that was once heavily mined for its coal reserves. In its heyday it was home to some 5000 inhabitants, it housed apartment blocks, schools, bathhouses, shops, restaurants and a hospital. The island measured just 480 meters long by 150 meters wide and was so built up that from the sea it looked like a gigantic, fortified battleship. In 1974, however, the mining operations ceased and the island was abandoned, leaving it to the ruinous wrath of both time and Nature. 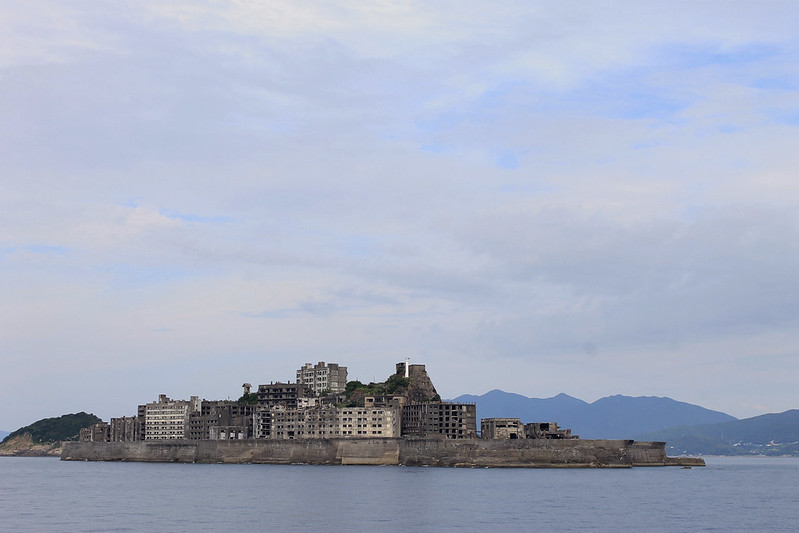 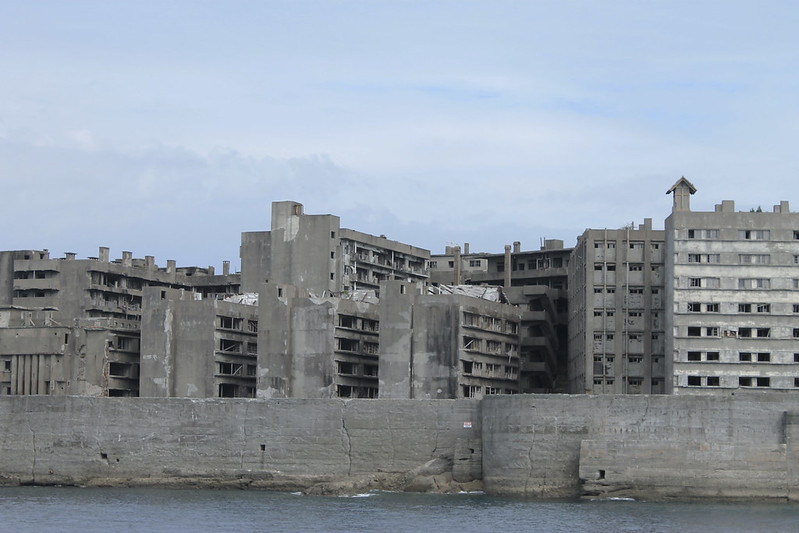 For over 35 years the island and its decaying buildings have sat as ghostly relics in the East China Sea. But, in 2009, tour operators began to run tours to the island and I was more than interested in paying a visit. 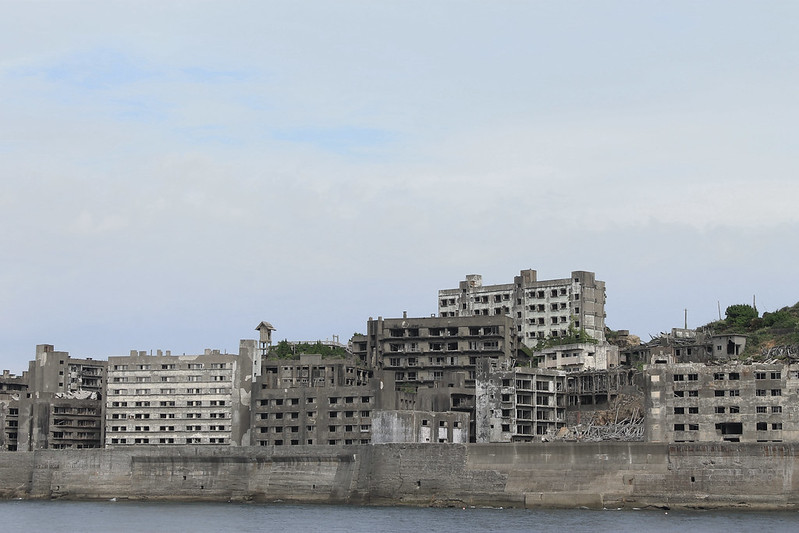 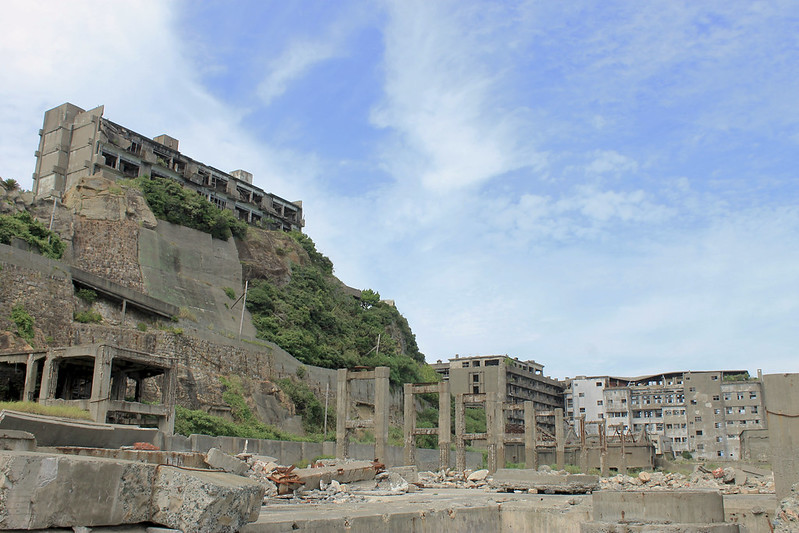 After securing my bike at the ferry terminal and stuffing all of my belongings into a coffin-sized locker, I was joyfully whisked away on the 50-minute ferry ride to the island. 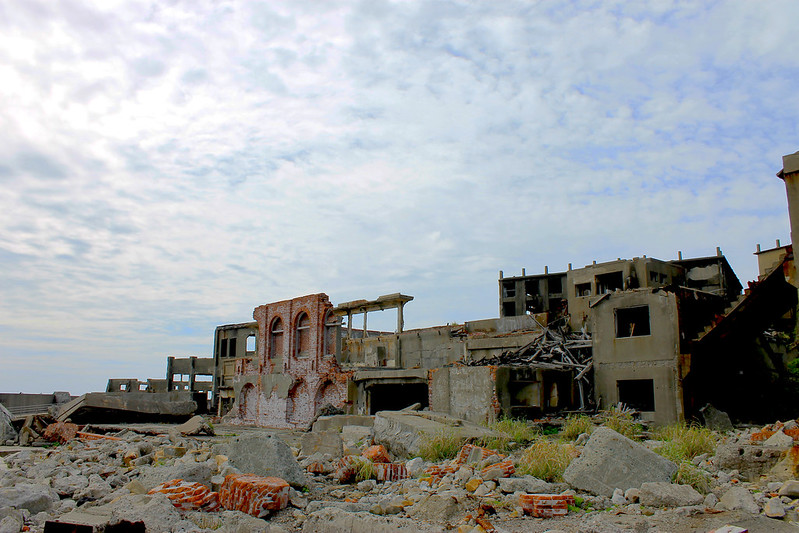 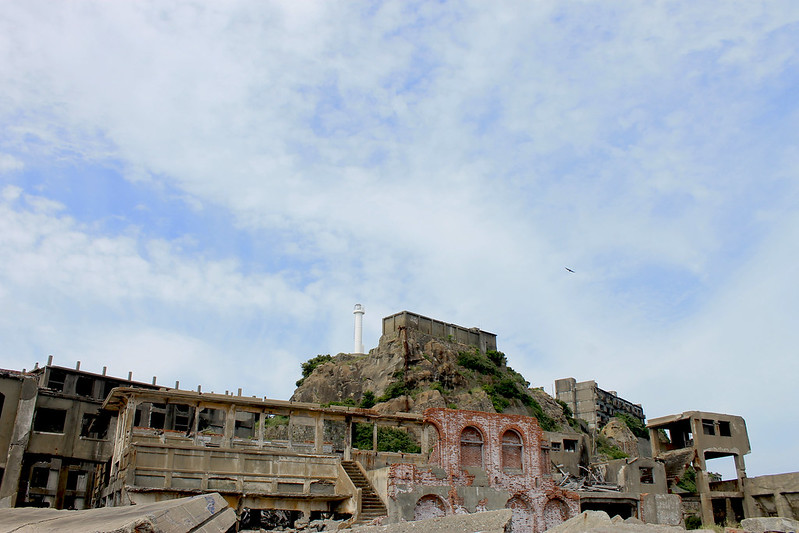 Gunkanjima also featured in the bond movie ‘Skyfall,’ to where many like myself would also associate the island. I expected no Bond-esque shenanigans today though as the ferry waded docilely through the calm ocean waters toward the island. On the approach, the first thing that strikes one is the high-rise almost communist style era apartment blocks, an eyesore upon the horizon. Dull and weathered looking buildings with blown out windows that looked as if they’d felt the full force of a thousand typhoons. 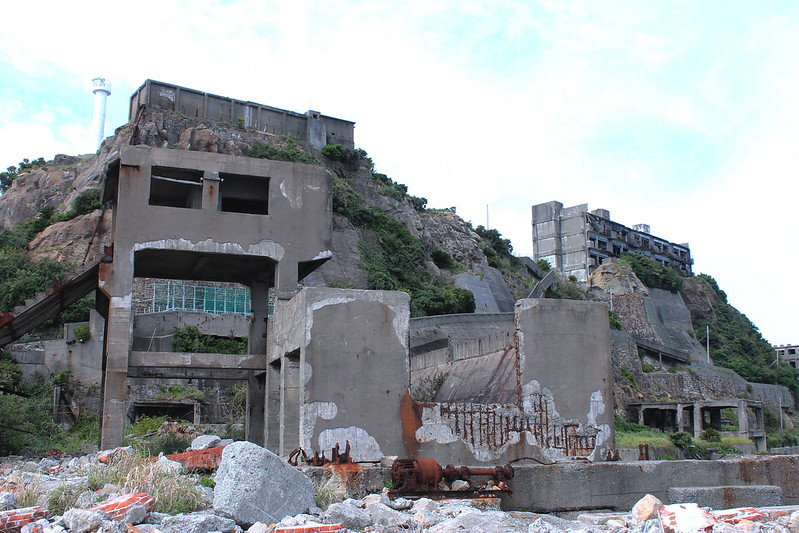 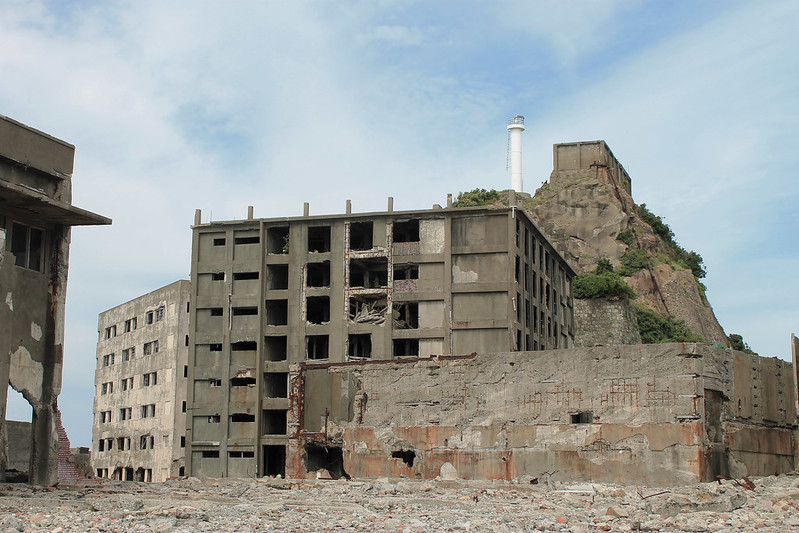 When the ferry docked, a number of tour guides split people up into groups, before leading them around the island. Unfortunately, you can’t roam at will, as many of the structures are considered unsafe. Most of the scenes in Skyfall were filmed in the special effects green room back at Pinewood Studios, England. But just from walking along the stable sections of the island, it was enough to soak in this edificial graveyard of former habitation. Rubble lay strewn across the ground, whilst rustic steel framework protruded out of the decaying buildings. Vegetation grew out of the cracks in the ground and smothered everything in its path. It was an eerie place, a place where one definitely wouldn’t want to find oneself stranded for too long. It was most definitely the perfect Bond villain hideout. I happily snapped photographs for an hour or so, amongst fellow tourists and Bond fans alike – before taking the ferry back to Nagasaki. 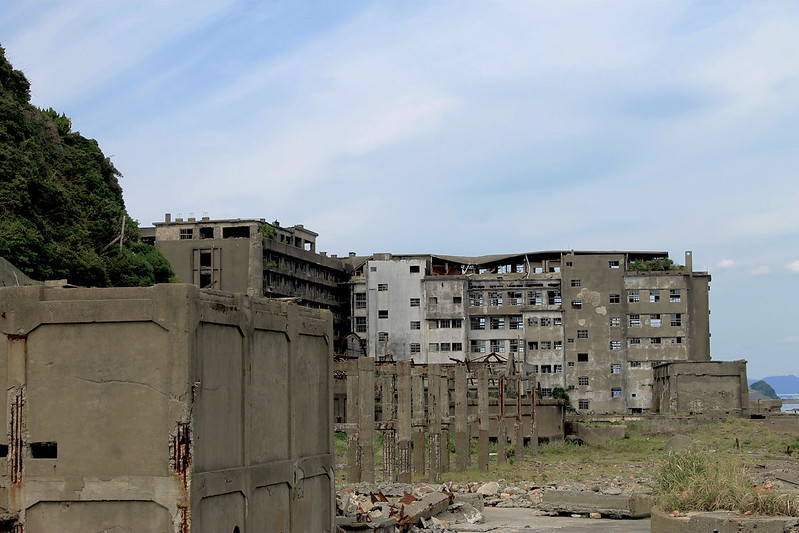 On the way back, everyone on the boat seemed to have had their energy zapped from them, myself included. After a couple of mild days, the weather had now chirped up again and the temperature was pushing back up into the thirties. In these sorts of climes, it doesn’t take long for one to lose energy. I looked around the boat and saw a contingent of people with their heads down, or nuzzled upon a partner’s shoulder, throwing out a merciless supply of ‘zzzzzz’s.’

I tried my hardest to fight the curse, but before I knew it, the ferry had docked back at Nagasaki harbour as I found myself jutting awake suddenly – as a group of passengers piled past me, each one of them looking at me like I was some sort of bleary-eyed smack addict. 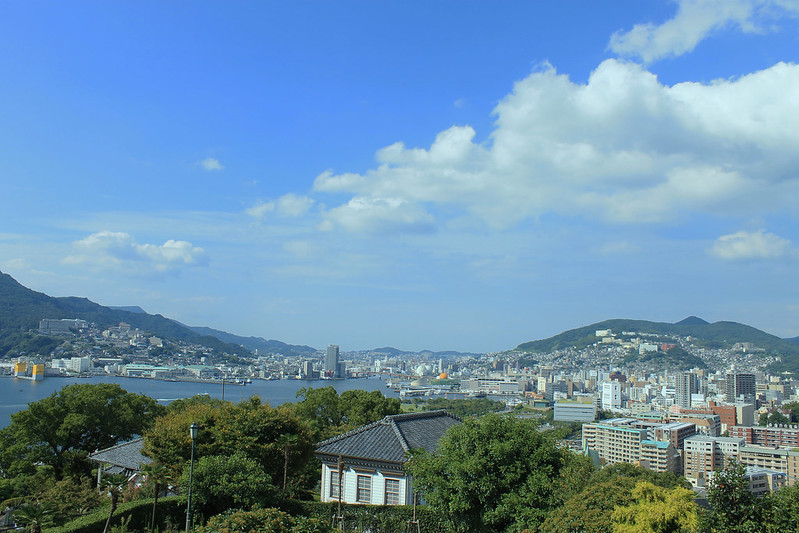 It was early evening when I met up with Couchsurfer, Richie, a Kiwi teaching English in Nagasaki. Richie and his Japanese friend, Jin, took me out for some sushi, before we headed up 333 meters to the summit of Mt. Inasa. The city below was a hive of activity, glistening with a flurry of lights, all the way up into the darkness of the mountains on the opposite side of the valley. 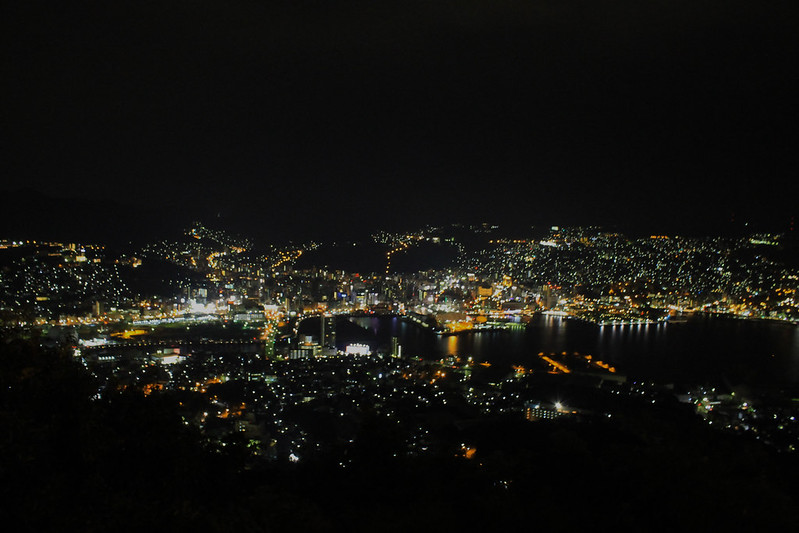 From the ashes, this great city had risen again, to prove the worth of existence through belief, courage – and some seriously hard fucking labour. Nagasaki was back on the map; here to stay. 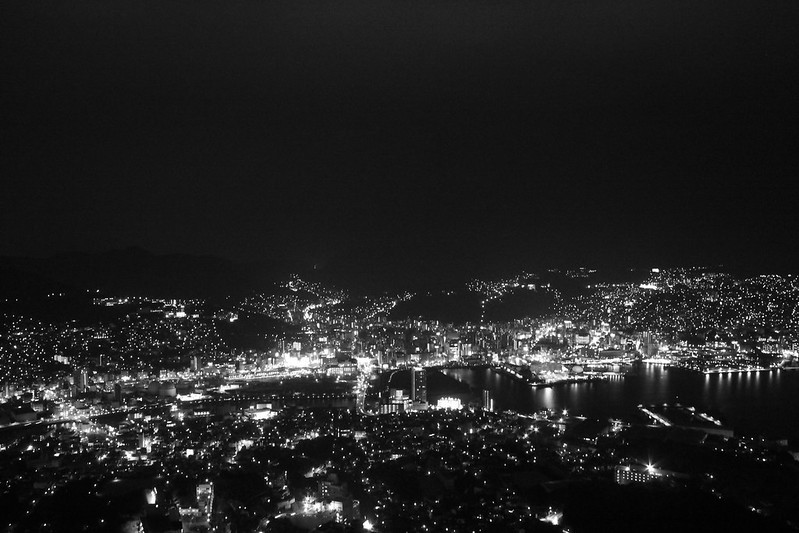