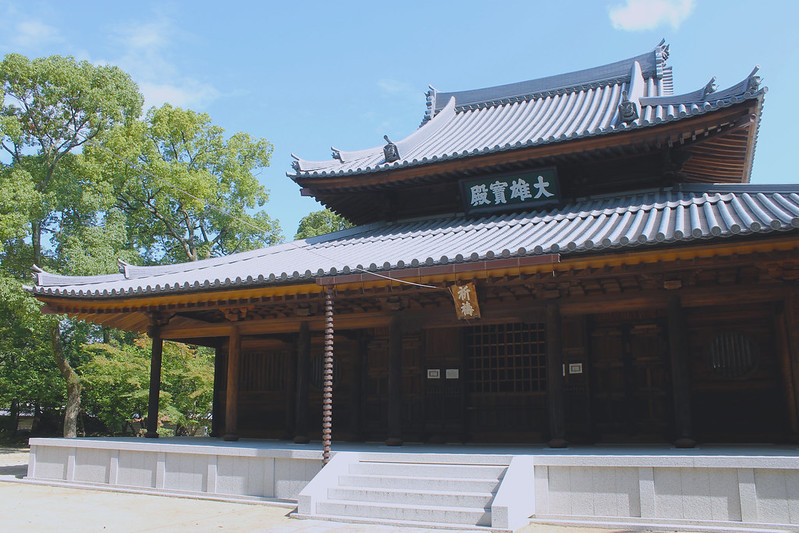 Leaving central Fukuoka,  was slow and tedious. Traffic lights, busy three lane highways, clustered and bumpy sidewalks and of course a cutthroat contingent of guileless mamachari. The weather was overcast, yet extremely humid, the vast throngs of heavy traffic and exhaust fumes only adding fuel to the surrounding stickiness. Eventually, when the traffic finally thinned out, and I’d left the last of the high-rise apartment blocks behind me, I secured myself a scenic route through a procession of lonely hills and rice paddies. This would lead me on to the scruffy industrial sprawl of Kitakyūshū. Kitakyūshū is the northern most city of Kyūshū with over a million inhabitants and it serves as one of the largest industrial hubs in the country. It is also a gateway to the neighbouring island, Honshū. Cycling along the north of the Dokai Bay, I saw nothing but dull looking factories and an expanse of power plants. 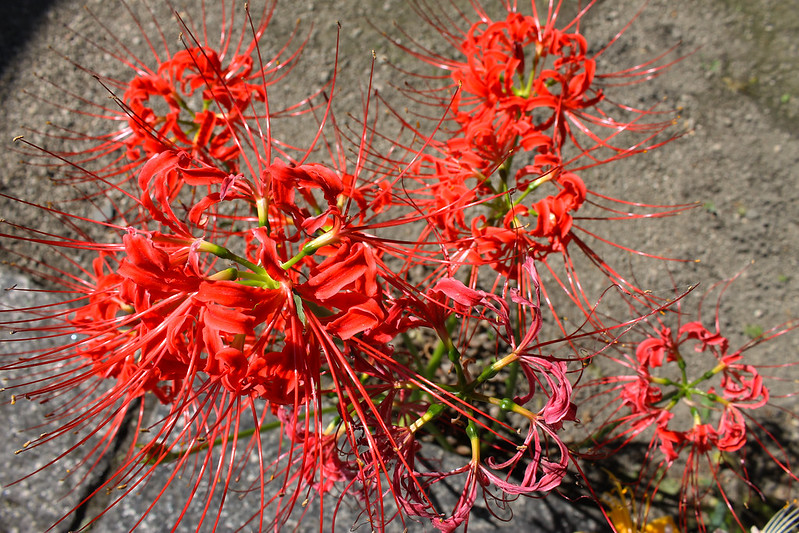 In the 1960’s, the bay was referred to as the ‘Sea of Death,’ due in part to the amount of wastewater and pollutants that were being evacuated into the bay on a daily basis. Yet amid protests that started with housewives complaining that they couldn’t dry their laundry on washing lines – because when they took it in, it was black with soot… the city council began to feel the pressure. Over the years the city’s industrial sector would learn to grind out the country’s needs in a more environmentally friendly manner. Of course, that doesn’t stop the place looking like a complete shit hole… But then, industrial zones are not meant to be pretty, their job is to produce product and by any means produce it well. And, considering the amount of trucks whizzing past me every 5 seconds, that was exactly what Kitakyūshū must have been doing. 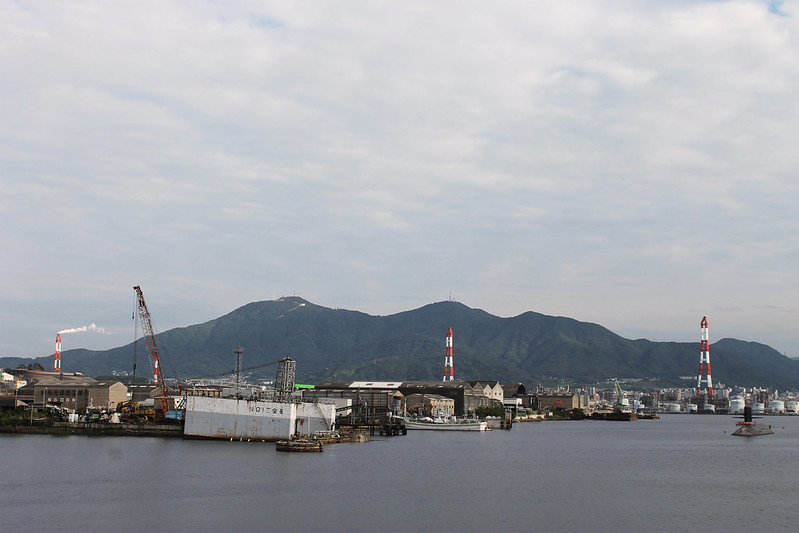 I hit a stumbling block upon reaching the suburb of Wakamatsu, where I found a bridge and a tunnel that could lead me across the bay and further into central Kitakyūshū. Unfortunately, both bridge and tunnel happened to be toll roads, and as the traffic steadily flowed I would be greeted by a no cycling sign. I was though feeling somewhat crafty. Halting near the bridge entrance, I took a sneaky look around.   Go on Dan, you know you want to, it’s probably only about 400 metres across, it’ll be fine, nobody will probably even notice…probably, and if they do just play the dumb foreigner card… My eyes narrowed as I set about pedalling, and the very moment that I did, I heard a whistle blow. Shit! Through some mesh fencing, a uniformed man appeared from a little bunker with a cigarette in his mouth, he wagged his finger at me like an angry headmaster. Double shit! I smiled cheekily and swiftly did a 180° turn, darting off in the opposite direction blushing slightly. I was too embarrassed to look back over my shoulder because I’d been a naughty boy. For some five miles or so I backtracked around the bay, until I found a bicycle friendly bridge. But here my frustrations would mount as I hit the rush hour traffic and a number of other no cycling signs that forced me to find alternate routes. Lacking any maps or notes in which to aid me through this urban nightmare, I would try my best to orienteer my way through the city via compass, but unfortunately it had no way of detecting dead ends. Heading up a steep, almost vertical hill, for about 20 minutes in a residential area, I found a dead end. Coming back down the hill the same way, I found another dead end that I swore wasn’t there earlier. The layout of the city was preposterous. An absolute mindfuck. After further milling about, I found Dokai Bay again and the other side of the toll bridge from Wakamatsu. I’d just wasted the best part of 2 hours! I looked around for something dainty and soft to kick, yet there was nothing but concrete, so I just pushed onwards into the brewing dusk, my rage haphazardly piling up in the process. From the Oseto Strait I trailed the coast through Kokura, considered the heart of Kitakyūshū and once home to one of the biggest armament factories in the country. This had been the primary target for the second atomic bomb during World War II. On the cloudy morning of 6th August 1945, Major General Charles Sweeney piloted the Bockscar to Kokura, yet due to climatic conditions was unable to find the target, thus Kokura was spared. Instead, turning the plane around, Sweeney would guide the weapon of mass destruction to its secondary target of Nagasaki, where fate was not so kind. 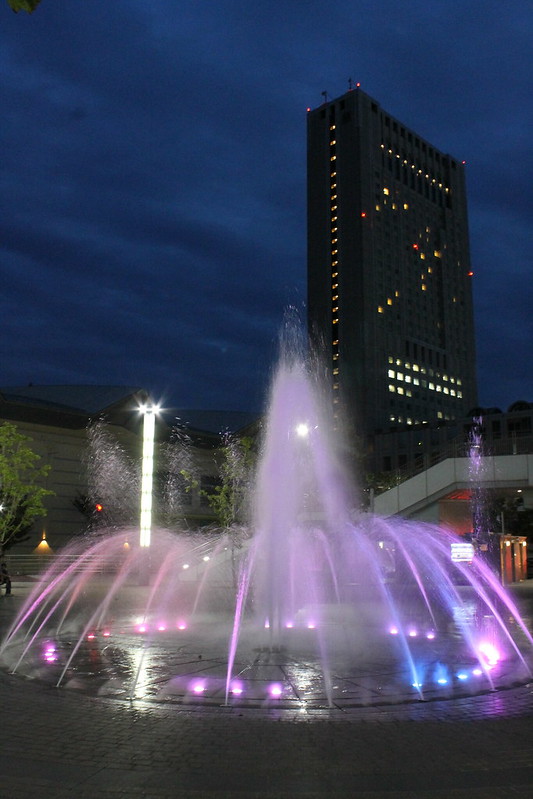 Continuing farther afield, I cycled parallel to the Kanmon Strait, across from which I could now see the bright lights of Shimonoseki. A multi-coloured Ferris wheel lit up the night sky, along with an ambient glow cast from the Kaikyō Yume Tower – a structure that standing at 153 metres tall was the tallest building in Western Japan. Reaching the old trading port of Moji, I found a lift that took me deep down into the ground. There a sweaty 780 metre long pedestrian tunnel led me directly under the Kanmon Strait and back onto the island of Honshū.

The final stages of my trip were now drawing ever closer, and suddenly the stresses of the manic streets of Kitakyūshū were relieved.

Total time in the saddle: 559 hours and 54 minutes