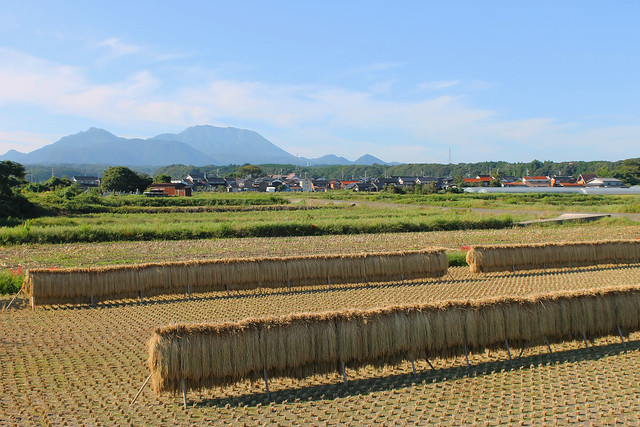 A cackle of crows woke me from my slumber. It was barely light outside as I exited my tent to see an old man doing some stretches,  just five metres away from me. We acknowledged one another with a mutual nod. Once I’d packed up, he came over to me and gave me an energy drink for the day ahead. I thanked him, as two older ladies then arrived and they all in sync walked off into some scrubland together. I asked no questions. 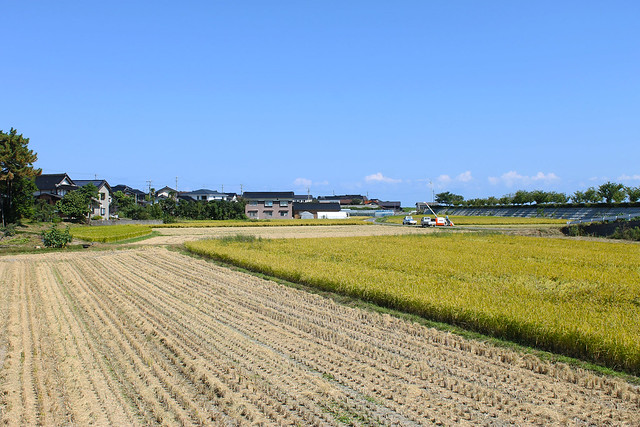 On my way again, I trailed Route 9 easterly, buzzing off the ecstasy of the energy drink; riding almost blindly into the rising morning sun. The road lay sandwiched between an assortment of agricultural dazzle; rice being hung and dried in the fields, alongside other crops such as: watermelon, scallion, yam, persimmon and an abundance of pear, the prefecture’s showcase product. 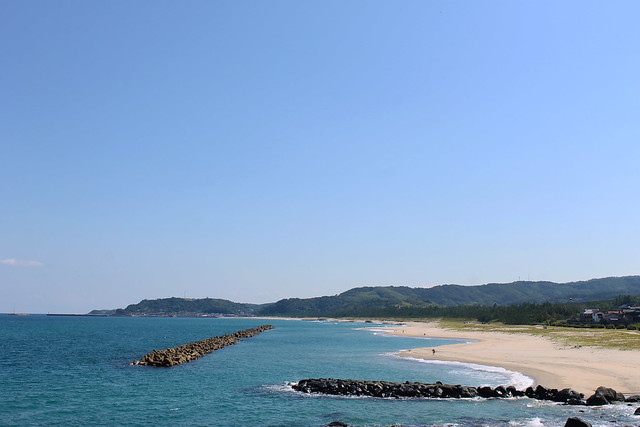 I would go on to lose a bulk of heavy traffic to a nearby expressway, as Route 9 became a more reclusive and habitable ride. The route eventually branching out towards a scenic coastline that rose and fell, very much like Shimane’s coastline – as it offered up a plenitude of pristine and scantily clad beaches. 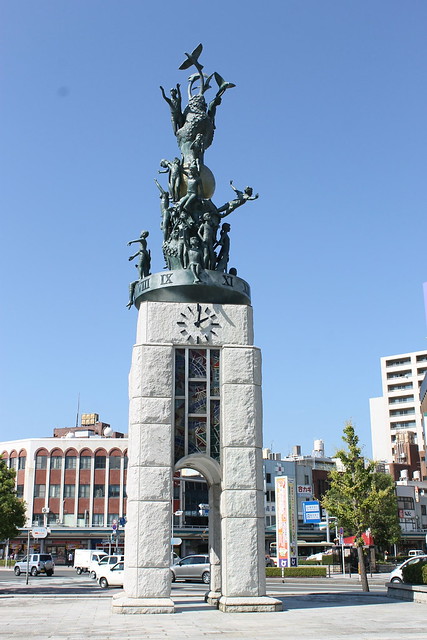 Tottori had an excuse for its complete lack of humans though, as with just a little over 580,000 heads, it is the least populated prefecture in all of Japan. Its capital city was a low-key affair; the only mild entertainment that I would stumble across was a collection of nattering local drunks, sat on a park bench; hands clasped firmly around their sake jars. What they were talking about I couldn’t have possibly of fathomed, but it couldn’t have been about anything that had actually happened in Tottori. 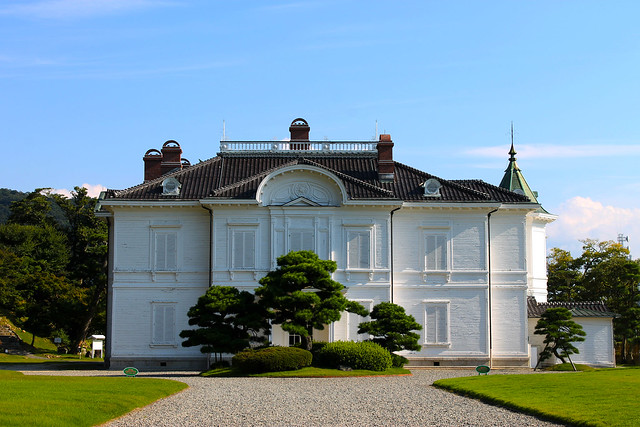 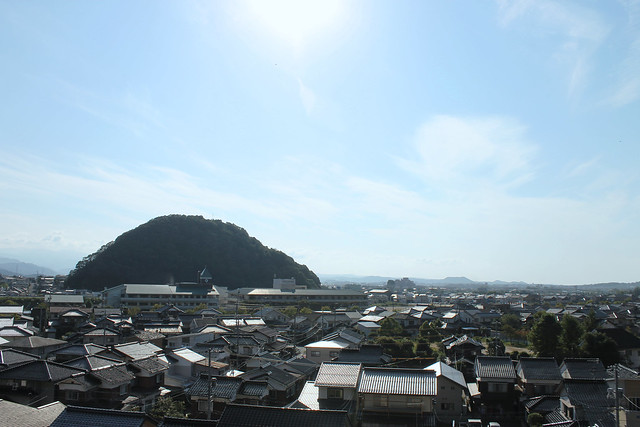 The prefecture does however have a big hitter that sits just north of Tottori City; its sand dunes. Despite their being formed over 100,000 years ago, it does feel like the Japanese had somehow copy/pasted a vast section of the Sahara desert onto their very own doorstep. The dunes are quite surreal and span some 10 miles of coast; some dunes reaching up as high as 50 metres. It’s the only dune system of its kind in the entire country. I walked up the biggest one I could find, as a steady wind rolled off the Sea of Japan, casting tiny sand particles into the air that delicately bit the skin upon impact. 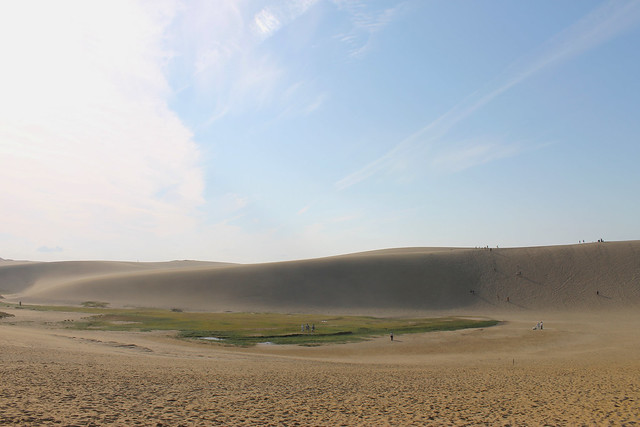 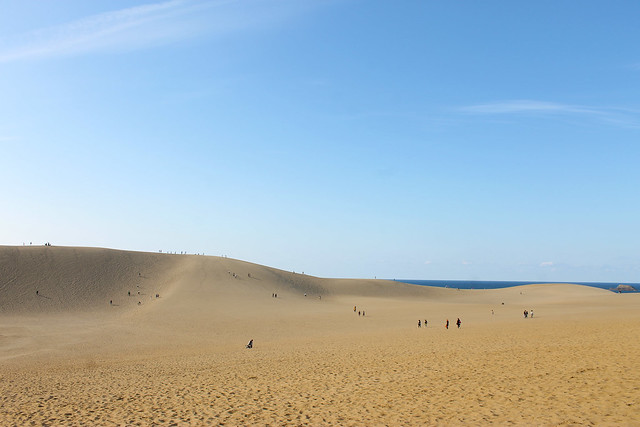 From afar, legions of tourists were trudging up distant dunes; they looked like an army of ants returning to the nest. The area receives about two million tourists every year and not only can one paraglide and board down the dunes, but one can also ride a camel. I actually once rode a camel called ‘Dave’ in Mongolia – and he ate an entire tree, it was weird. Camels are weird. I made tracks. 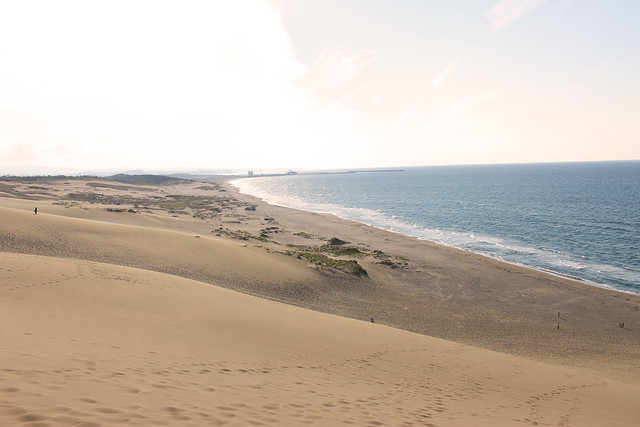 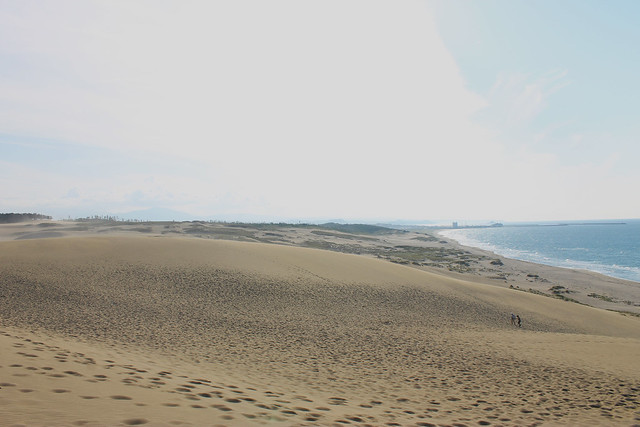 Heading inland towards the mountains of the Tajima Sangaku Prefectural Natural Park – Hyōgo Prefecture – I stopped off in the quiet onsen village of Iwami. It’s the kind of place where people’s jaws drop upon seeing a foreigner; they being extremely rare in these parts.

My clothes were stuck to my body by sweat and so I swiftly found the local bathhouse. It was a nice and spacious onsen, with only a few other locals about to look directly at my penis. Generally speaking, the ogling came from the older generation, as they like most old people didn’t really give a shit. I’m looking forward to this era I must say, not just for looking at penises from a distant land without remorse, but just so that I don’t have to give a shit about anything in general. It seems like something morally productive to aspire to.

Afterwards, I found a park right next to an old people’s home that ran alongside a narrow and gentle flowing river. Amongst the darkness, I set up camp, before inserting my newly clean body into my fetid sleeping bag. By dawn, I would be a filthy stinker again.

Total time in the saddle: 591 hours and 11 minutes