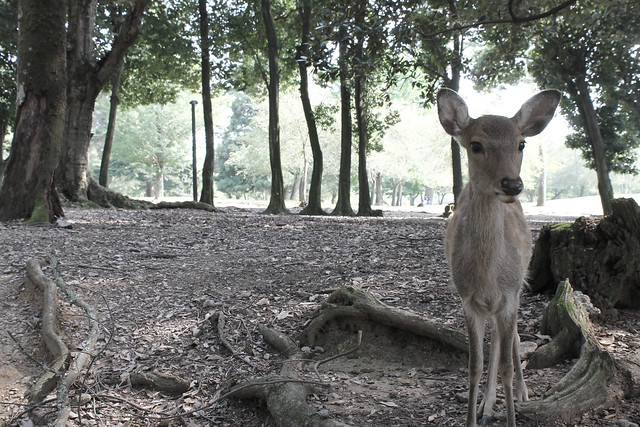 As an ancient capital, the city of Nara is far from an intimidating place; with a population of little over 360,000, the city is relatively small by Japanese standards. It was designed in a similar fashion to many a Chinese city; in a grid layout making it easily navigable by foot or bicycle. Naturally, I’d choose the latter way to explore. 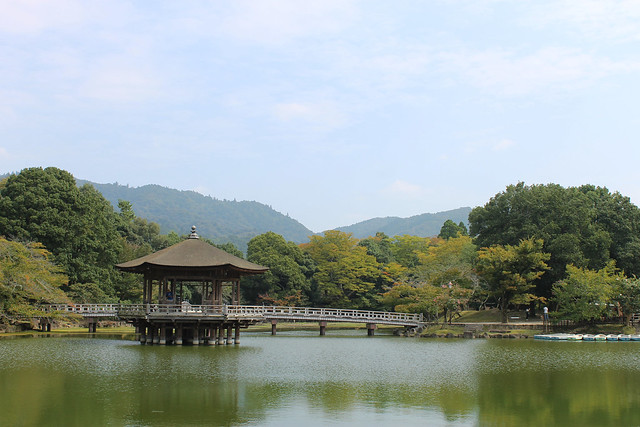 The city was crowned capital of Japan from 710 to 784, bringing about the Nara Period that would become heavily influenced by Buddhism. This era paved the way for many temples, shrines, statues and books – which today remain well preserved. In fact, Nara has more UNESCO World Heritage listings than any other prefecture in the country. 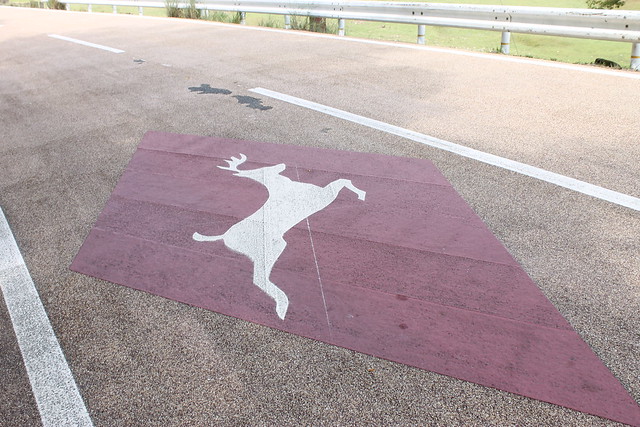 I started out with a short cycle ride over to Nara Park; a huge inner city green space which hosts a bulk of the city’s national treasures – inclusive of its 1200 resident shika deer. Just as with Miyajima in Hiroshima, or the wilds of Yakushima, the deer have no natural predators and are completely fearless of humans. The story goes that when Nara was originally built, the mythological God of Thunder and Swords – Takemikazuchi – arrived at the Kasuga Shrine in Nara Park on a white deer, to protect the newly established capital. From this time, the deer were seen as some sort of messengers for the Gods and have long since been protected. Despite the usual signs advising visitors not to feed the deer, there are vendors selling deer crackers to the public; the crackers sending some of the animals into a bit of frenzy. Throughout the day, I saw various deer galloping after humans like packs of hooligans, before mugging them blind of crackers. Yet, whilst some behaved like yobbos, others were more gracious, often bowing their heads to their guests, before accepting their treat. Something I thought I’d never see, but then such is the magic of Nara Park. Amongst the varying temples and shrines in the Park, the highlight is the Tōdai-ji Temple; one of the largest wooden structures in the world. First completed in 752, it had at the time so much influence that some 32 years later, the government was forced to move the country’s capital from Nara to Nagoaka – in order to try and dumb down the impact the temple was having on governmental bureaucracy. 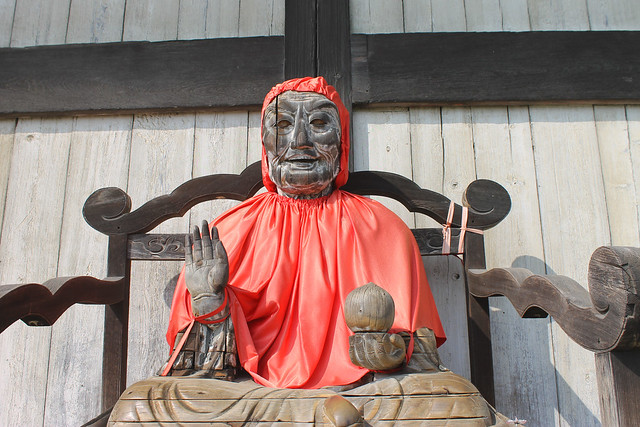 Despite now being 33% smaller than its original incarnation, due to subsequent fires, the temple is still a grand sight to behold, inside as well as out. It also holds the biggest bronze statue of a Vairocana Buddha in the country, measuring in at around 15-metres in height. One isn’t meant to take photographs of the grand Buddha, but that didn’t stop the Chinese tourists… because they do what they want. 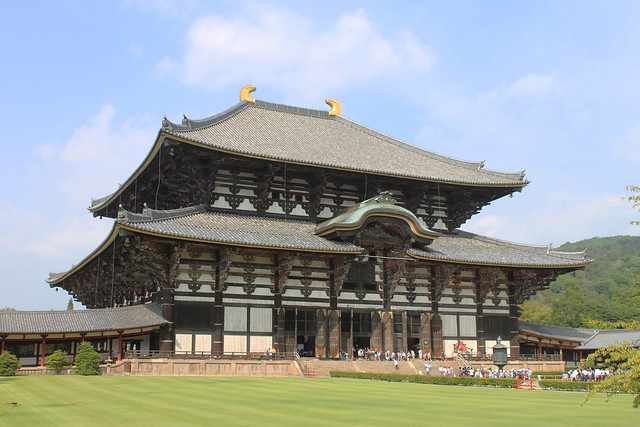 Towards the afternoon, the park and temple grounds had become too heavily crowded with camera-toting tourists and screaming school children, and so I went in search of something a little more off the tourist trail. Just slightly north of Nara Park – jutting up into the skyline – was what appeared to be the relic of a rollercoaster. Opened in 1961, it was heavily inspired by Mr Disney’s popular Californian theme park, but just not quite as popular. To prove this point, in 2006 it went bust and closed its doors to the outside world forever. Yet, instead of being bulldozed and turned into a vulgar series of apartment blocks, it was just simply left to the winds of time; and in that there is an inner beauty that has attracted many an urban explorer or haikyo – as they are known in Japan. This place was Nara Dreamland. 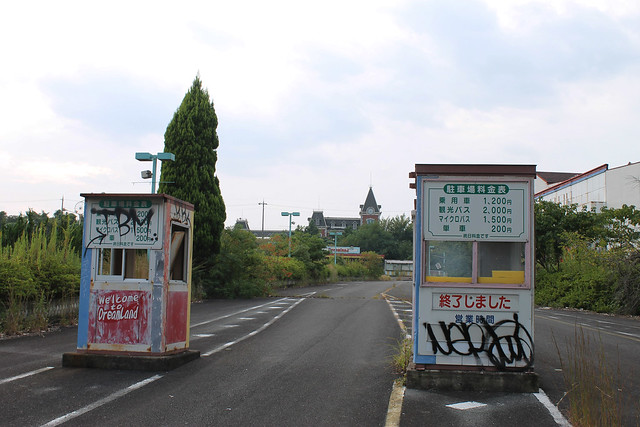 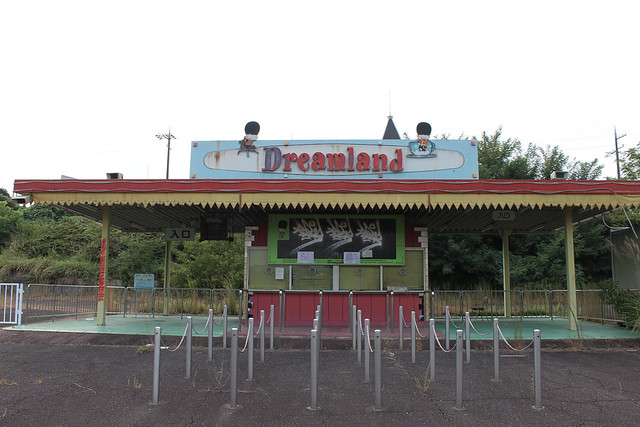 The parking lot was running wild with vegetation as lamp posts and signboards stood bent, rusted and strewn with graffiti. A lacklustre chain blocked the entrance, yet just several metres away another chain was down. I cycled inside to investigate. A couple of vandalised toll booths dictated the parking rates and read ‘Welcome to Dreamland.’ Heading to the ticket office, and the main entrance to the park a little further afield, I felt like I’d stumbled across the set of ‘The Walking Dead.’ In the eight years since its closure, the Park had truly lost its fight with time, giving it a spooky sort of post-apocalyptic edginess; it was a surreal place. At the ticket counter, the blinds were down, the Dreamland sign above it was faded and dismal looking. To the right of the ticket office was a dark and dingy tunnel that led further into the confides of the Park; the tunnel boarded-up with 12ft high plywood. I could have climbed it, if it wasn’t for the fact that I didn’t want to leave my bicycle behind. 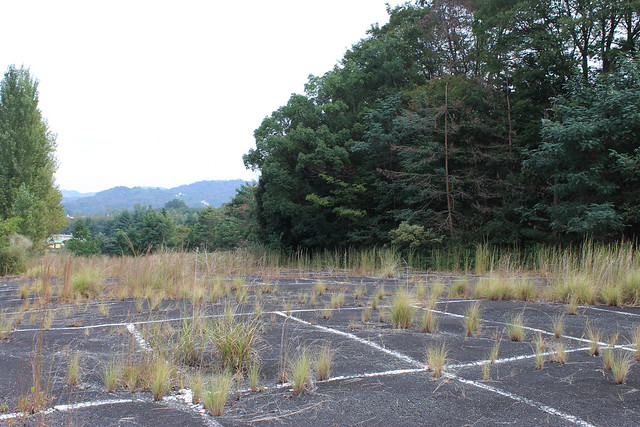 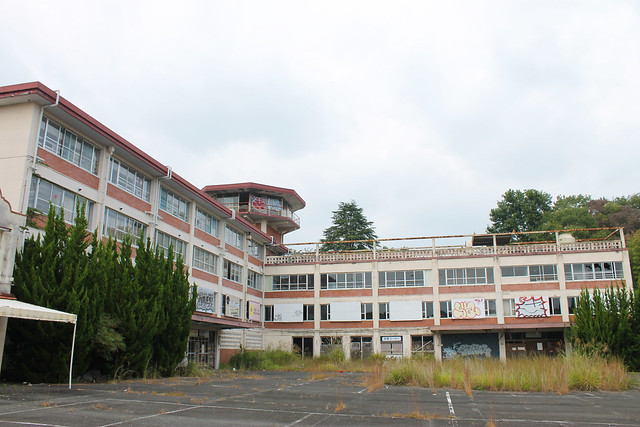 I’d heard rumours of huge fines and people getting kicked out of the country for getting caught inside this place. Whether or not this was just all Internet propaganda or fear-mongering, to aid an adrenaline rush, I couldn’t be too sure – so, I decided to explore a series of boarded-up souvenir shops and buildings just to the side of the entrance instead. 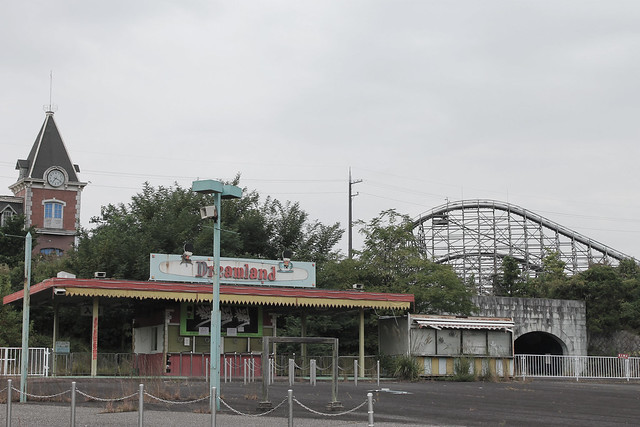 Cycling slowly into the ground floor of a murky and doomed looking multi-storey car park, I happened across a plastic bag curiously positioned in the centre of the floor. Coming to a stop, my natural inquisitiveness led me to poke my nose inside to reveal some rolled-up clothing with a wallet on top. As soon as I saw the wallet I knew that I wasn’t alone and quickly looked around into the surrounding gloom. I saw nothing for a few short moments as I slowly began to peddle away from the scene with the feeling that I might have been being watched. I need not have really worried, as cycling a little further, my curiosity was met in the purest form by a completely naked Japanese man prancing about with headphones on, listening to his iPod. He was loving life as he bopped back and forth with his eyes closed, completely in his element. I was a little shocked and nearly crashed my bike into a concrete bollard. Startled by my presence, the  naked man of whom I swear was just about gearing up for a slut-drop opened his eyes and quickly guarded his limited manhood…

‘Konnichiwa,’ I offered kindly, trying my hardest not to burst out into laughter. For a chubby fellow, he certainly moved fast as he scuttled off into the shadows, completely abandoning his plastic bag. I cycled out of his seedy lair and back into the safety of daylight. I wondered what kicks he got from being naked in a car park on the outskirts of town…  had I completely ruined his day by invading his naughty time? Or did he secretly want to get discovered?

I appreciate the fact that fantasies and fetishes exist, but strutting about starkers in an abandoned parking lot… how is that ever sexy? I guess you could say don’t knock it until you’ve tried it. I’ll probably never try it though… probably.

Several moments later, I saw the nudist running up a hill-side and into the undergrowth. He now donned a flannel shirt but his bare behind was still exposed. In his hand was his plastic bag. Yes, I had definitely ruined naughty time. I felt bad.

Any temptations I was initially having in regards to investigating the amusement park any further were now redundant. If there was just as many naked Japanese men prancing about on the inside of the Park as there were on the outside, then I would declare it all a little bit too rich for me. Things would be much more novel if I were back in the quaint little Naramachi district, drinking green tea and talking about the weather – as if nothing weird had ever happened today, nothing weird at all.