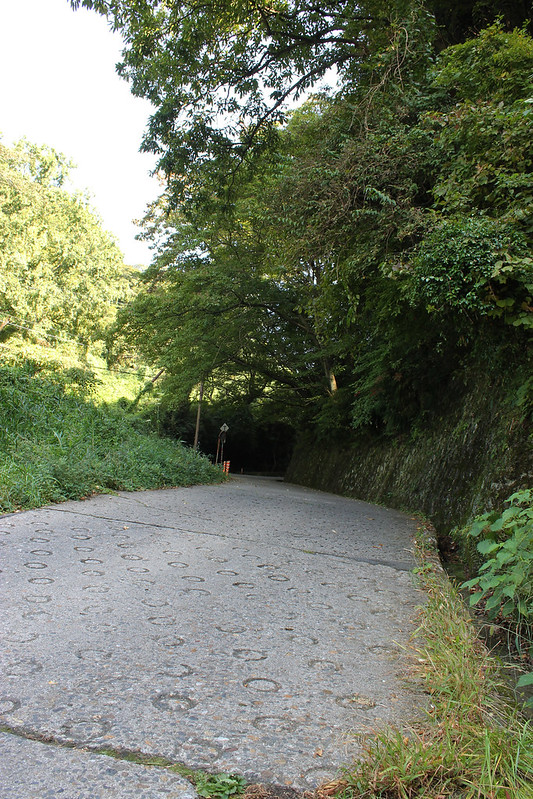 The day saw me needing to traverse just 30 miles east to Nara City; a piece of piss I’d initially imagined. I couldn’t have been more naïve. Now don’t get me wrong, I would have rathered the day’s physical self-destruction, as opposed to the likes of what happened on the Norikura Skyline, or say cycling through Tropical Storm Nakri again. Yet regardless, the day’s demands were still nothing short of ridiculous. I knew I had a mountain to climb and along the national Route 308 – a busy stretch of road in downtown Osaka – I’d expected a pretty standard no thrills day of cycling. But, as the mountains began to spring up around me, and I breached the last of the outer suburbs of Osaka, the road suddenly narrowed and rose steeply. As I hit a treeline, the road narrowed some more, and further steepened, until the point of sheer obscenity. It felt like I was cycling up the side of an alpine riddled skyscraper.

For the first time in 40 prefectures, I had to admit failure. Being forced to dismount from my bike, I would have to push my 50kg’s of kit up into the mountains instead. The road narrowed some more in the process, until it became just about fit for smaller vehicles, i.e. Micro Machines.

Every time a vehicle approached, I’d have to pull my rig over into the undergrowth, to allow it to pass. One saving grace however, was that I was under a canopy of trees, shaded from the sun. Pushing its way back into the 30’s, summer obstinately refused to fully let go.

When you begin to appreciate the efforts of other solo travellers that make their own travel documentaries and suddenly realise that you just can’t be arsed.

Unfortunately, I was walking at about 2.8mph, in prime mosquito territory; I trudged on cursing and complaining with every step I took. Pushing my rig would also get all sorts of muscles pumping and working overtime, until I was shaking like a nervous wreck. My child-like biceps – which for the best part of this journey had only directed my bike and participated in the occasional 5-finger shuffle – were beginning to burn up. My pedals, with their serrated edges like piranha teeth, bit into my shins and drew blood. I cursed some more as the road steepened ever further to my disadvantage; my hamstrings becoming taut, feeling like they needed to give birth to something hideous.

A car passed, its owner revving the guts out of its engine in a low gear, as a young boy with his face pressed up against the passenger-side window, turned and said something to the driver. They both burst into laughter. I knew the drill by now and the boy was right…  I did look like a wanker.

Intermittent breaks were key, and it was whilst having one such break and shouting at a moss-laden rock, that an elderly couple approached me on foot from the opposite direction. ‘Taihen ne?’ Isn’t it a bit difficult? Asked the elderly man, pointing at my bike and gear.

They both chuckled before telling me that I wasn’t far from the summit. And with that there was one last, cruel slog before reaching the peak of the dastardly Route 308. Here the streets were cobbled and there were a few old farm houses and a restaurant. The view down across Nara City revealed that the old city didn’t appear to be anywhere near as big as I’d expected. This principally being due to the fact that it was Ikoma, a completely different city altogether. To get to Nara City, I still distressingly had one more mountain to scale. But I had however made it to my 41st prefecture, so that at least accounted for something. I trudged on.

Total time in the saddle: 614 hours and 10 minutes

Struggling for a rogue gift idea for that hard to please cycling friend this Christmas? Or maybe you just fancy treating yourself? Or your Gran? Or that secret lover you met down Spoons last Friday night? Well then, why not consider a copy of Tokyo to Tokyo, the perfect companion to any lonely and absinthe fueled Christmas.

For more info and exponential hot goss on my latest travelling endeavours please pay me a visit over at Travel Bloke, thanks for reading: