After coffee and a high five, I left Jimmy and Lei to their Japanese studying; something that I was struggling to find the time to do. I had been averaging anywhere between 60-100 miles a day in the saddle, so the very thought of sitting down to study Japanese at the end of the day made me want to commit seppuku.

I cycled through the busy streets of Kanazawa, a city once synonymous for being a samurai town. In Nagamachi, one can still witness well-preserved structures from the Edo Period where samurai once resided. To the east of the old samurai district sits the city’s castle grounds, where one can find the star attraction, the Kenrokuen Gardens. Bicycle parking here was limited to an area marked out in a small’ish yellow grid. I could only manage to fit my titanic-esque vessel half in and half out of the yellow grid by propping it up at the end of the row of parked bicycles. That’s good enough. Yet as I began to walk away, it clearly wasn’t good enough… as an angry parking warden came running across to me, blowing a whistle and shaking his finger at me. The fact that the bike was overhanging the line by a good 0.42cm was clearly a cause for concern and a major health hazard to the entire nation! The warden’s tone was irate and his Japanese beyond me, so I had no choice but to play it dumb as he spoke.

The angry warden – in a uniform of navy blue with pearly white buttons – then began to motion for me to move my bike into the yellow grid.

‘No space,’ I said, whilst trying to gesticulate with my hands.

‘Ok, ok,’ he said, before turning away from me and yelling for back up.

His portly colleague waddled over courageously, more jovial than the angry warden who would soon bark an order at him, wiping the happy grin off his face in a heartbeat. How dare you smile on the job, you knucklehead! The two men then began to move all the bikes from right to left, until there was enough space for me to squeeze my bike in at the end. The angry warden watched me closely, checking to make sure that I was thoroughly within the parameters of the yellow grid. Content, the angry warden then became the happiest parking warden in Eastern Asia. I thanked him and as he reciprocated, his colleague nodded too. They then bowed to one another and strolled off in opposite directions. Only in Japan… 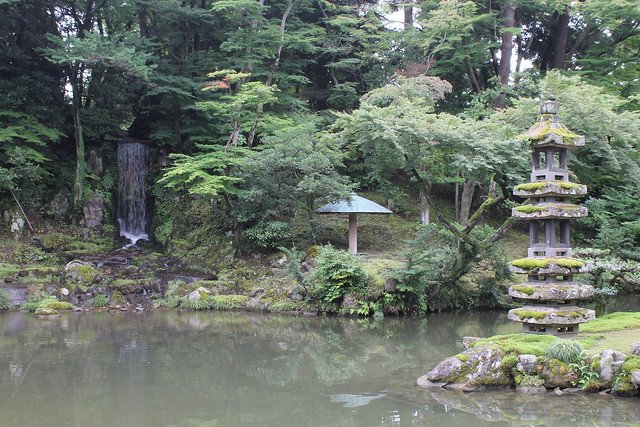 The Kenroku-en Gardens first opened to the public in 1874 and today they’re considered one of the three most beautiful gardens in all of Japan, alongside the Kairaku-en of Mito and Kōraku-en of Okayama. But, for many, Kanazawa’s Kenroku-en Gardens are the real deal; a designated “Special Place of Scenic Beauty.” Spread across some 25 acres, the gardens envelop the six fundamental qualities that – according to an ancient Chinese book of gardens – are required to make a garden sublime: spaciousness, seclusion, artifice, antiquity, water courses and panoramas.

Not being much of a gardener however, I only counted five – seclusion clearly out of the window, as with many tourist attractions within Japan. But the gardens were enchanting enough, with an aged Edo feel to them; a selection of novel tea houses, intricately crafted bridges, koi clustered waterways, moss laden sculptures and ancient trees with roots as solid as steel. An idyllic spot for a feudal lord to show a Geisha girl his willy.

Total time in the saddle: 380 hours and 45 minutes