I awoke early to a selection of lurching footsteps, creeping around outside my tent. Fearing that I was about to get molested by the walking dead, I grabbed a pile of wits and chanced a sly glance through my tent’s involuntary secret peep hole. I was relieved to find that it was just an elderly gentleman walking his dog. The elderly rise early in this part of the world. I rose at about 5am and would often encounter parks full of elderly men and women, performing morning exercises, whilst chewing the cud; an Akita dog often not far away, scoping out some local snatch, whilst urinating up my tent.

On this very morning, whilst exiting my tent, the elderly gent’s Akita didn’t take too kindly to my presence and began to bark vehemently in my direction. The dog was clearly a racist. The elderly gent apologised before they went on their way. 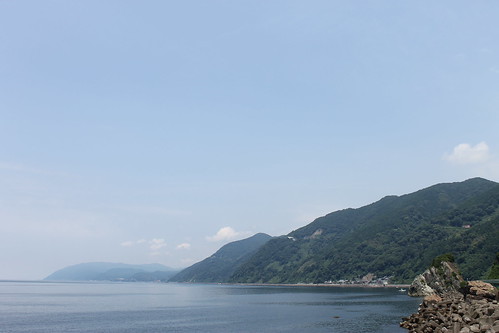 Heading westerly from Fukui, I sought out the Echizen Coast, a dramatic stretch of coastline bludgeoned timelessly by the ocean’s distorting waters. The road packed tightly to the water’s edge made for a gracious ride; the clear skies bringing a hive of activity to the coast: windsurferists, snorkellists, barbecueists, sun-absorberists, volleyballists and, of course a mandatory selection of screaming adolescents for good measure. 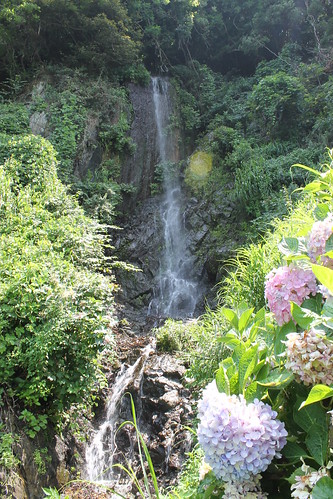 The coastal road stretched some 60 miles toward the rather uninspiring city of Tsuruga, from where I switched inland in a southerly trajectory towards Japan’s largest freshwater lake.

Lake Biwa is a grandiose lake, holding approximately 27.5 billion tonnes of water, with a perimeter of about 143 miles. It occupies a 6th of Shiga Prefecture’s total land mass. The lives of 15 million people are dependent upon its vast reserves; the lake being the source of the naturally formed Seta River which runs a course of some 47 miles out to Osaka Bay. 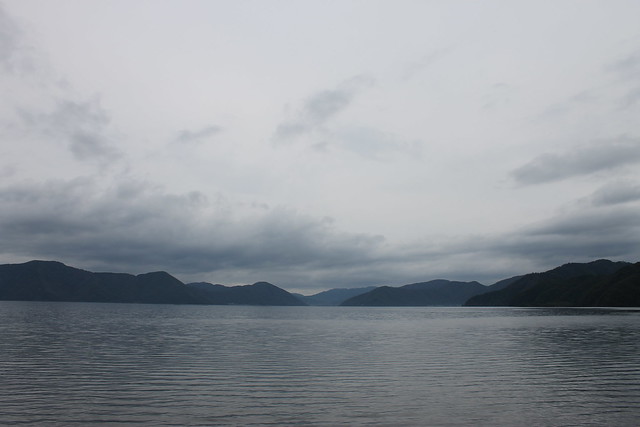 Approaching from the north, I traversed the fringes of the lake’s swarthy waters, along the more populous eastern plains. To the west, a shadowy outcrop provided a continuous silhouette of the sparsely populated Hira Mountains. It was overcast and muggy; my sweaty skin acting like a piece of flypaper that would sap up all manner of roadside grit and impurities. I should go for a swim, I’d think to myself on a number of occasions… but as enticing as the waters may well have been, I was making some personally ground-breaking progress. Not that this was a race, but once I had found a steady rhythm, it was very hard to tone down the daily expected output of mileage. I had a self-imposed daily quota, and with the terrain being as flat as a pancake, it was important to carry on at full speed. 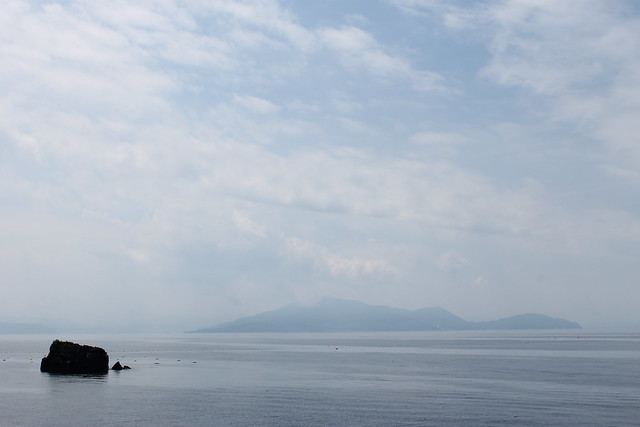 By the time I’d made it to Nagahama, the sun was beginning to slip behind the mountains; a radiant amber glow bouncing off the great lake’s surface. The mild stress of finding a place to stealth camp was relieved by a free lakeside camp site, which was opposite none other than an opportunist 7-Eleven. I’d found my heaven. Purchasing a 4-pack, I set up camp next to a fallen tree. There were only a small number of other campers about, as I perched myself upon the tree trunk and sank my beers in silence.

The sun gradually ebbed beyond the horizon and cast me into darkness. For now, I was massively content with life, I’d by no means found the meaning of it yet, but supping on a beer alongside one of Mother Nature’s finest, definitely had a certain feel-good factor to it. Wandering over to the shoreline, I wondered if I might finally take that plunge. Dipping my big toe into the lake’s ice cold waters, I shuddered violently. Nah. Downing the rest of my beer I retreated to my tent to dream about sleep. 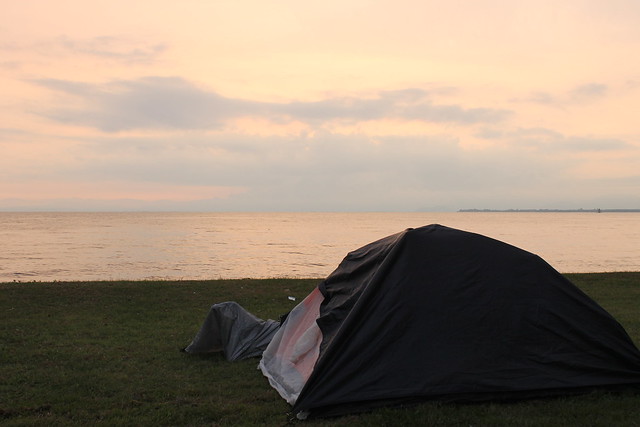 My tranquillity was shattered moments after resting my head upon my makeshift pillow (a dry bag of pants and socks). The shrill sound started from a nearby car park; the monotonous drone of a diesel generator powering up, shortly followed by cheers of joy, and then moments later an endless boom, chicka-boom, chicka-boom…

Basil Brush on acid? Not quite. Unzipping my tent I discovered that I was in the midst of an all-night lake side rave.

From then on, music of a discriminate nature pounded haphazardly from a stack of amps deep into the night as a collective of lairy youths waved neon sticks about guilelessly as they danced and drank themselves silly. Slightly perturbed, I zipped my tent back up and lay back down.

And then closed my eyes.

Total time in the saddle: 387 hours and 16 minutes