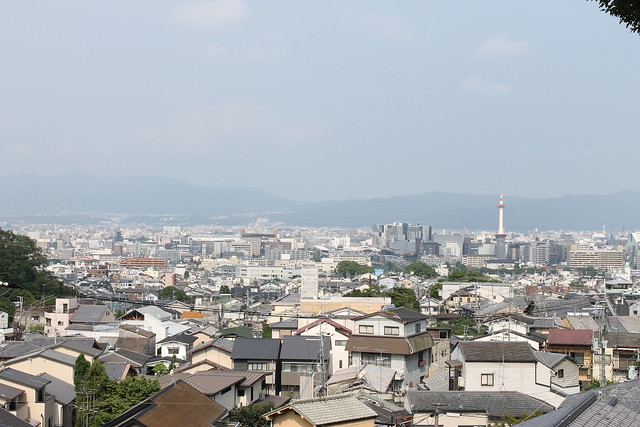 I would awake with a hangover. Kyoto was only my second prolonged stop since Hokkaidō, some three months previously, and it acted as the perfect excuse for an absolute skinful. Arising out of bed, yawning like a barbarian and then groaning like a zombie, I stumbled from my hotel room and out onto a balcony. My hotel sat embedded into the slopes of the Higashiyama Mountains and offered a panoramic view across the city. A city that doesn’t intimidate with an abundance of skyscrapers, unlike in many Japanese cities; a law having been passed that forbade the building of structures over a certain height. This was in an effort to allow the city to retain its cultural relevance and identity. 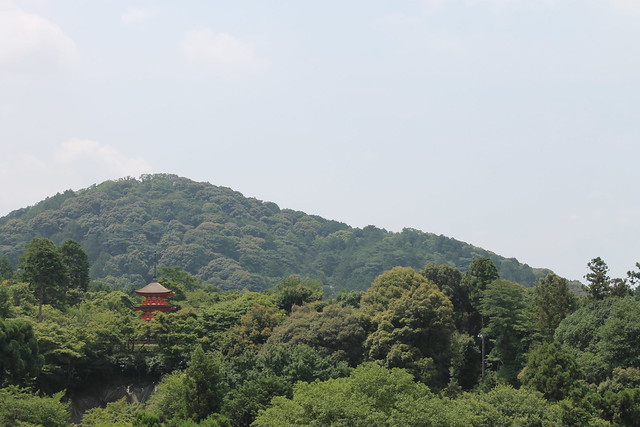 Obviously, this doesn’t completely overrule modernity and there are still some exceptions to the cause – such as the Kyoto Tower that thrusts itself up into the skyline. Historically, however, Kyoto’s roots surge deep, spanning back to 794 when Emperor Kammu first designated the area – then known as Heian-Kyo – as the countries imperial capital… a title it would relish for well over a thousand years. Emperors and Shoguns would come and go and civil war would occasionally decimate the city, but every time it would be rebuilt – restoring the city’s historic values. It is also the headquarters for Nintendo. 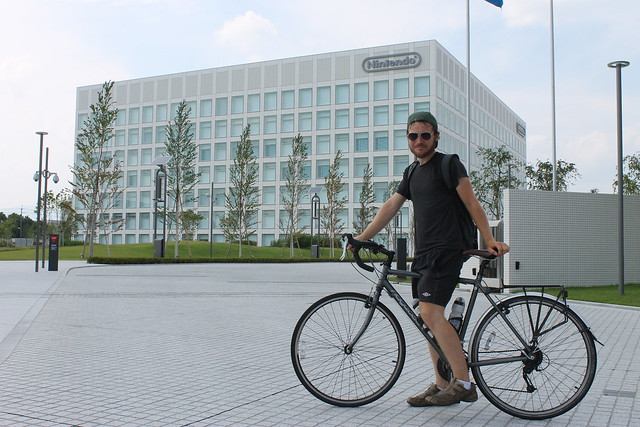 Venturing down from the mountainside on foot into the Kyoto Basin, I was greeted by some menacingly hot weather. Being surrounded on three sides by mountains, means that Kyoto is seasonably predictable; its summer’s really fucking hot and its winters really fucking cold. 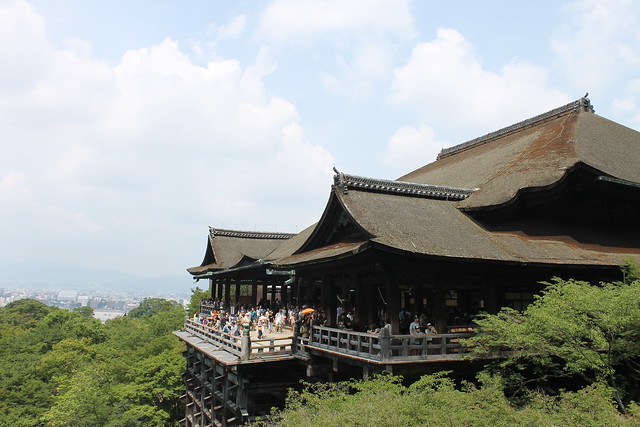 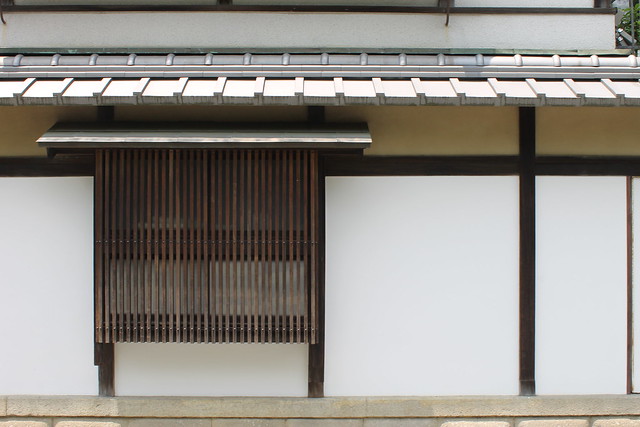 Having a grid style layout, Kyoto is easy enough to navigate around. Strolling through the delicately cobbled backstreets of Gion, amongst the old tea houses, a procession of Geisha shuffled past; a silhouette of the past projecting into the present; an endearing sight. The immaculately detailed Geisha in their exquisitely decorated kimonos, holding their red brollies, wearing their clunky geta slippers and with beaming white faces are one of Kyoto’s oldest and most familiar sights. Contrary to popular belief, they are not actually hookers… but for a generally hefty fee one might acquire the services of the Geisha to enlighten certain social settings. They joke, sing, dance, play musical instruments, serve drink and food, light your cigarettes and entertain with the kind of etiquette you can only really associate with the Japanese. 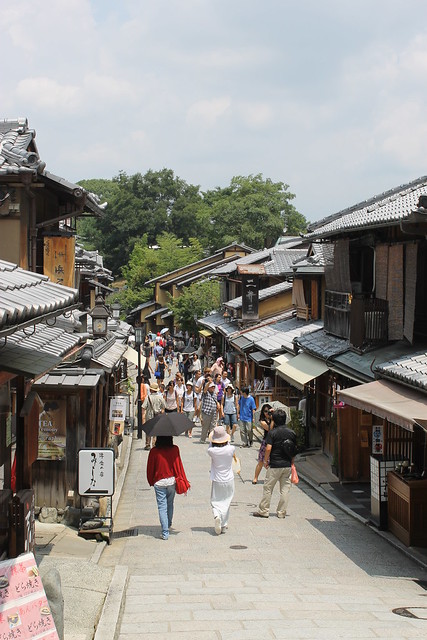 I hadn’t quite budgeted for the services of a Geisha (estimated £500) during this specific trip. But to see them scoot through this ancient district to their next appointment was enough to satisfy my ogling touristic eyes, ✓.

The old district of Gion soon merged into the new district, with modern shops and arcades offering a world of goods. These range from the latest designer clobber and filthy burger joints, to more traditional retail outlets – offering up a reasonable selection of: handicrafts, textiles, lacquerware, pottery, ceramics, fans and a multitude of other souvenirs and local delicacies. 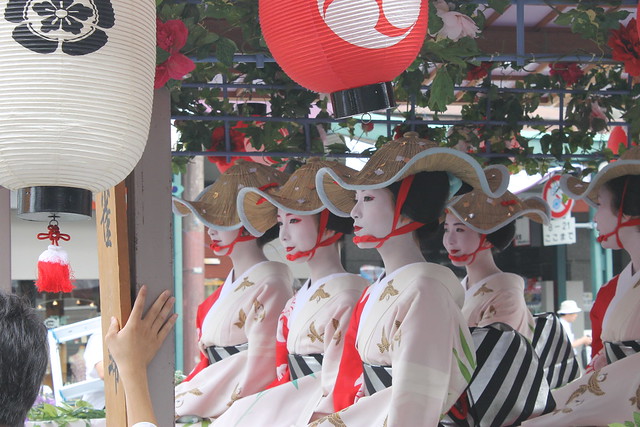 I discovered the claustrophobic and ramshackle Nishiki Market, or ‘Kyoto’s Kitchen’ as called by many a Kyotoite. The market dates back to the 14th Century and yields some 126 shops – and if beans, rice, pickles, tea, seaweed, fish, crackers and other obscurities are on your agenda then this is the place to be. I opted for some tofu ice cream, not quite hangover fodder – it was bland to say the least – instead, I felt an urge to smear it all over my sweaty face in an attempt to save myself from the city’s clamminess. Reluctantly, though, I managed to restrain myself from such clear madness in an effort to keep my sanity on a neutral par with that of my fellow tourists. And speaking of tourists, today would be the first day in a considerably long time when I actually felt like a tourist. With no pressures, time restraints or mountains to scale I was completely free to wander the country’s 6th biggest city in an aimless fashion. It felt almost like I was on day release… 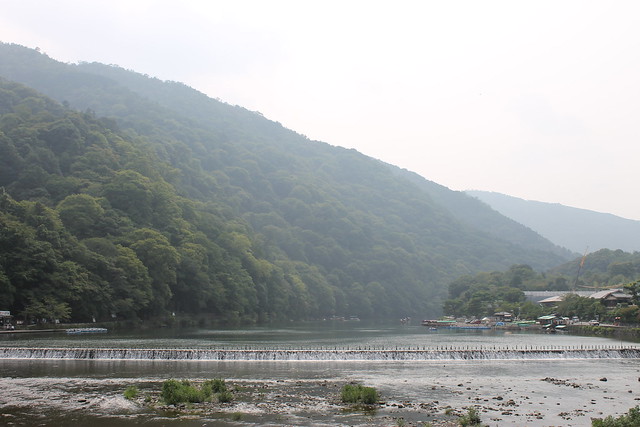 The remaining days were spent temple gazing, and with over a thousand Buddhist temples and four-hundred Shintō shrines, one can’t help but run into a few of them. The big hitters being spread apart from one another led me to unshackling my bicycle of its panniers to enable me to tour the city with a sweat infused ease.

Highlights included the Arashiyama bamboo grove – as seen in Crouching Tiger, Hidden Dragon and Fushimi Inari Taisha, a network of over a thousand closely linked vermillion torii gateways, that run amok over the slopes of Mt. Inari in Kyoto’s South East. 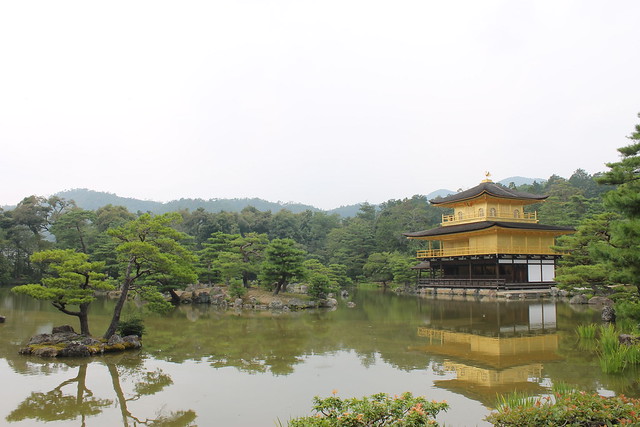 The true icing on the cake though would have to be Kinkaku-ju, otherwise known as the Golden Pavilion. Lonely Planet will tell you that to avoid the masses you should attend early – upon arrival it would appear that 94.7% of the camera toting tourists in Kyoto had read that exact same passage in their respective guidebooks. The place was absolutely crammed and I’m not so sure if there will ever be a good time to visit, due to the majestic nature of the structure. It will indefinitely always attract the masses. 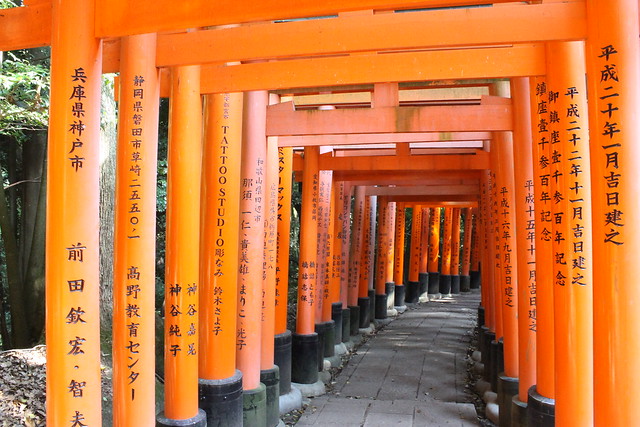 The 14th Century three-tiered pavilion is dressed in gold leaf to reflect its qualities onto a surrounding pond, amongst a fine Muromachi period garden. The structure is integrated with Nature in such a way, that it becomes a work of art. Photo opportunities were scarce, as stewards were keen to move me on, as to allow them to pour in as many Lonely Planet guidebook wielding tourists as humanly possible. Yet, the contrasting beauty of the temple alone, was more than enough to burn a generous mental image into my memory for at least half a lifetime. 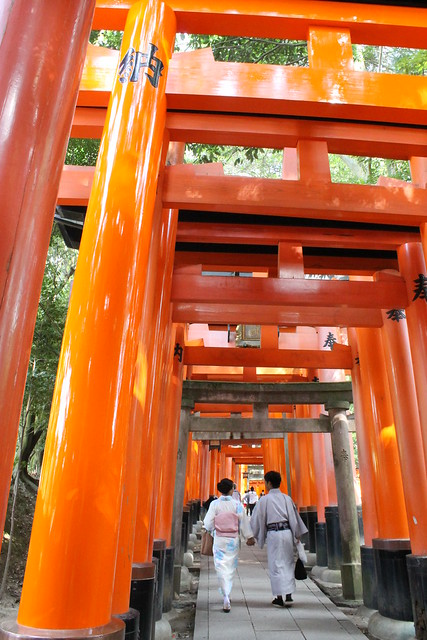 Before I knew it, my 4-day break in Kyoto was up and it was definitely that time again. I hadn’t wholeheartedly relaxed, nonetheless, the cultural heart of Japan had been an embracing pit stop and it was plain to see why the city was on the itinerary for the bulk of travellers to the country.

Having been saved from allied bombings during World War II, the city had retained a sense of historical dignity; something unfortunately that not every Japanese city can boast. 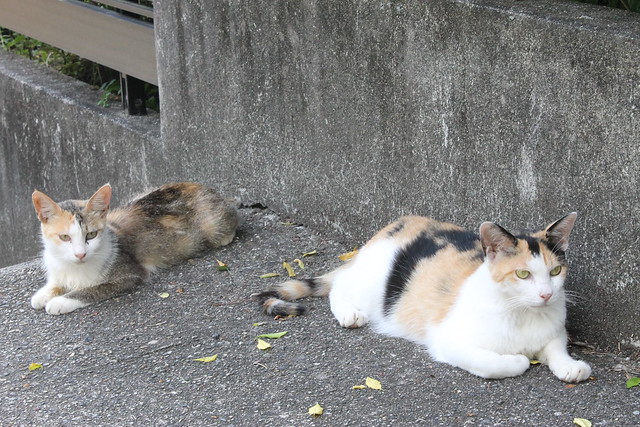