The sky today was overcast, blocking out the sun’s keen intensity. There was still an element of stickiness to the day but, with the sun in hiding, it made my surge fourth into Okayama Prefecture all the more durable.

Rural life was becoming a common sight again, after days of passing through a vast concrete sprawl that seemed to stretch all the way from downtown Kyoto some 80 miles away. I was now entering Chūgoku, the western most region of Honshū. If I cycled to the south of the current prefecture, I would be able to gain entry via ferry to Japan’s third main island, Shikoku.

I spent the day in Okayama city, a more than copacetic and liveable city with its handsome black castle (Black Crow Castle) and popular Kōraku-en gardens. The girthy Asahi River splits up into varying courses and these flow elegantly around the city, under a number of causeways.

A man who would call Okayama his home would also claim the right to be my Couchsurfing host for the night. Bryan was an American from America, Kansas to be precise. Now in his early thirties, he had settled here as an English teacher, some eight years previously, with his then wife. They did some sex and made young Eddy, whom Bryan still looked after. However, Bryan didn’t want to talk about his former wife – so we didn’t. He had just recently mortgaged himself a charming little traditional Japanese home: tatami flooring, shoji sliding doors and lots of wood, you know the drill. The three of us sat upon the porch in some deckchairs, tucking into some home-made burgers. Bryan and I had beers and young Eddy supped a glass of milk. Bryan seemed content and happy to be in Okayama, as did his son who was full of questions about life. He still though needed to be reminded a good four times that it was time for his homework; each reminder leading him to eat his burger with increased sluggishness. Eddy is a wise one, he’ll go far. 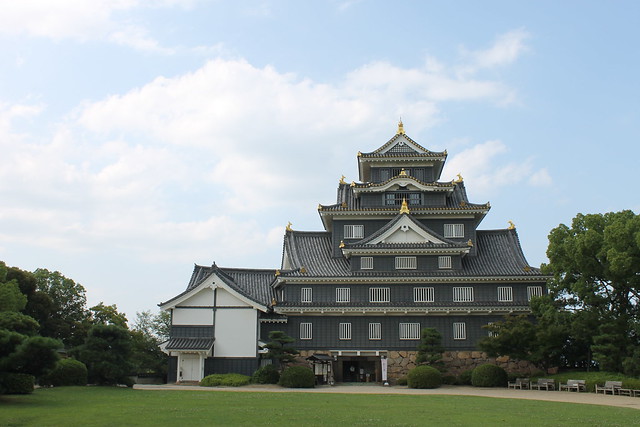