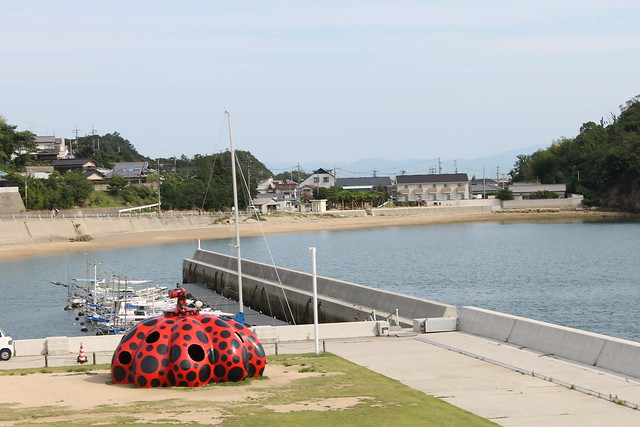 At Miyanoura Port I was greeted by a massive artificial red pumpkin. The 12ft-tall larger than life incarnation of the popular cultivar, was modelled by Yayoi Kusama. This was to be the first of a plethora of public art installations that I’d see. Various artists from across the globe found themselves indulging in the Naoshima project; whereby art and Nature are simultaneously fused as one. 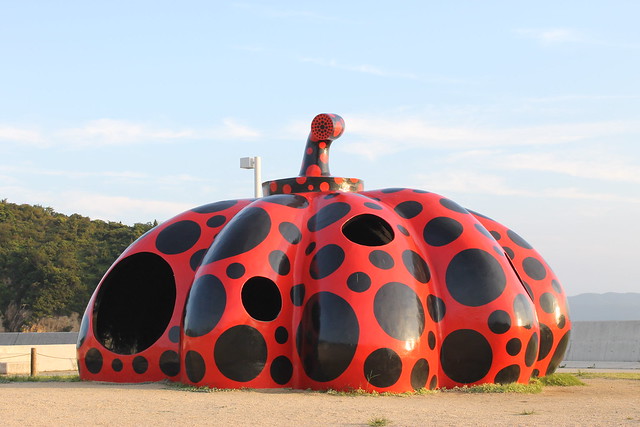 In the early 1990’s the island of no more than 3 square miles in size (and 3000 inhabitants), underwent an overhaul. This once dwindling island, known for its copper smelters and polluted fishing industry, would be propped up by the introduction of the Mitsubishi eco-friendly metal recycling plant. More interestingly, it established a mass scale art scene, funded by the publishing tycoon and chairman of the Benesse Corporation, Soichiro Fukutake. What started off as a few small scale art projects, would duly grow over the course of two decades into an aspiring art Mecca; attracting the attention of both artisans and art lovers alike. 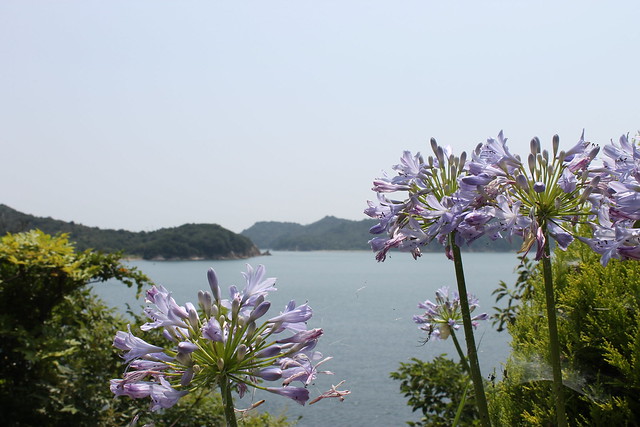 At the information desk in Miyanoura, I enquired about camping sites. I was politely scoffed at; the receptionist slowly crossing her arms at me to reveal that she too was a budding West Ham supporter. It was too hot and humid for fun, so I decided not to rise to the occasion and thus settled for a guesthouse just a short distance from the port. Dumping my belongings at my digs, I decided to take a leisurely stroll. And it wouldn’t take me long to find exactly what I was looking for… Bond, James Bond. 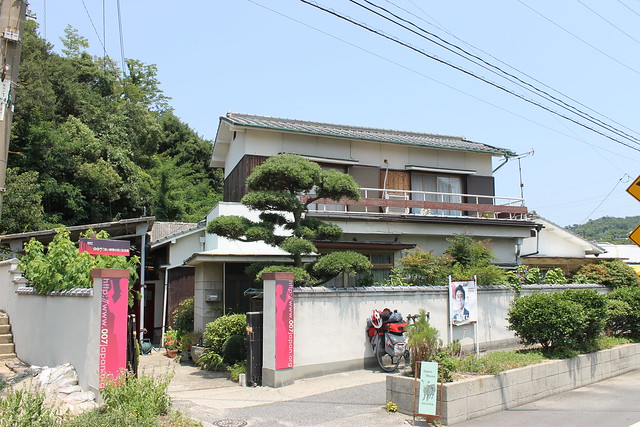 An ominous looking white-walled building with a couple of James Bond posters lured me inside. I’d read about it on the Internet and it had always seemed like a slightly surreal place in which to have a 007 Museum. Inside, it was no bigger than your average village hall, yet instead of a solemn set of faces, sat in a circle of plastic chairs craving the bottle, there was an invariably pro-Connery affair. An array of film posters and glass cabinets full of Bond memorabilia decked the halls: manuscripts, guns, action figures, nude pictures of Bond girls, novels in a multitude of languages and a copy of the January 7th 1966 edition of ‘Life’ magazine. This featured Sean C. in a ripped gimp suit, chest suggestively exposed. Sean aside however, the main emphasis was on Raymond Benson’s 2002 Bond novel ‘The Man with the Red Tattoo,’ which sees Bond return to the Japanese archipelago for the first time since Ian Fleming’s 1964 novel ‘You Only Live Twice.’ 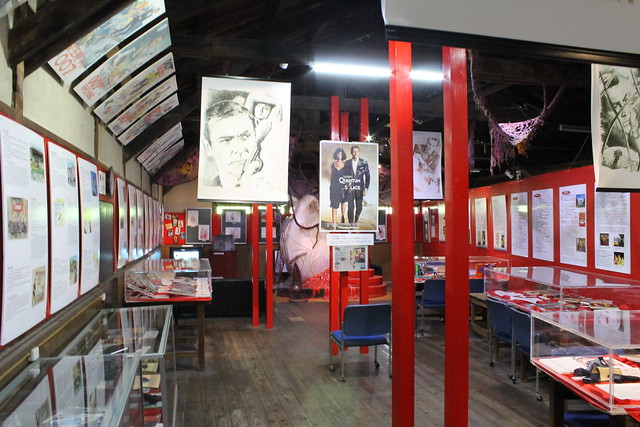 Storyboarding for the Benson novel surrounds the outer walls of the hall, along with a cheesy low budget film adaptation playing on loop in the corner of the room. In the story, Bond is on the hunt for a ruthless terrorist assassin who is knocking off a number of important diplomats – with a deadly virus. The search takes him to little old Naoshima – hence the reasoning for the museum’s general existence as a very promptive sort of petition to get the next fully fledged Bond film officially brought to the island. So James, what are you waiting for? Naoshima’s calling… pick up the phone. 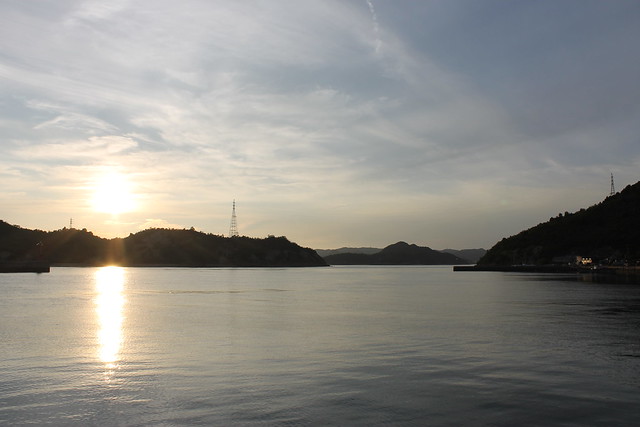 Heading east across the island from Miyanoura, I ventured towards a day of contemporary artistic infusion and confusion. Then I became mud guard-less. Ascending a brief and desolate hill, my mud guard would again frustratingly begin to catch upon the rear tyre as the heat was allowed to dictate my impulses as I dismounted from my vessel to manhandle the rear guard beyond recognition. Now though, as an added bonus, my rig was now a fraction lighter, my hot-headedness clearly paying off, well… sort of. 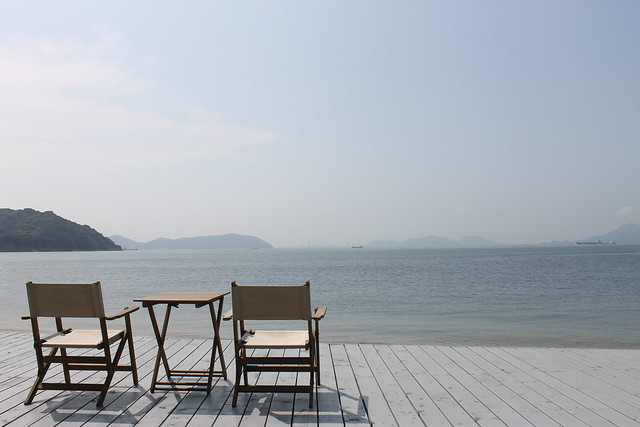 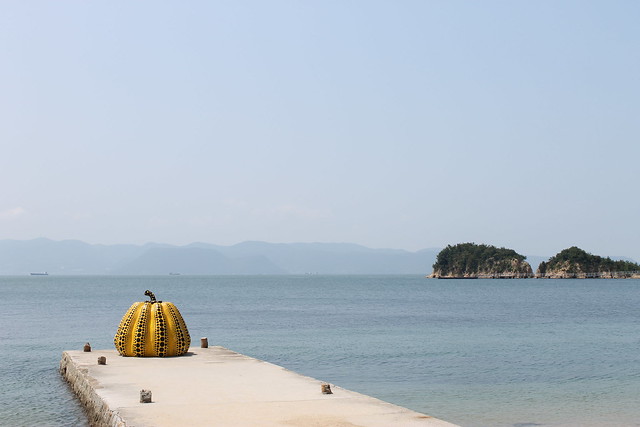 The island’s east revealed Honmura; a sleepy fishing hamlet with a big artistic presence. A number of once-abandoned homes are now new-fangled art house projects. A little farther south, lay the grounds of Benesse House and the ChiChu Art Museum. There I found a garden of animal sculptures, piles of obscure metal objects and another one of Kusama’s pumpkins, this time yellow. Close by was an idyllic and well maintained beach; the sun glittered fanatically on the inland sea. The area looked like a cross between something out of the 1960’s TV show ‘The Prisoner’ and a wily hideout for a surrealist Bond villain. Pick up the phone James, pick it up! 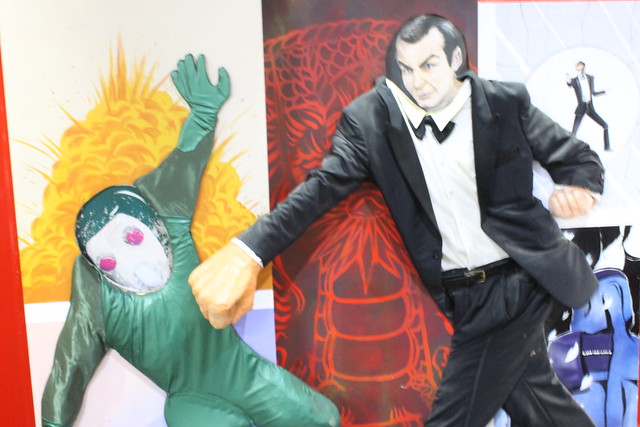 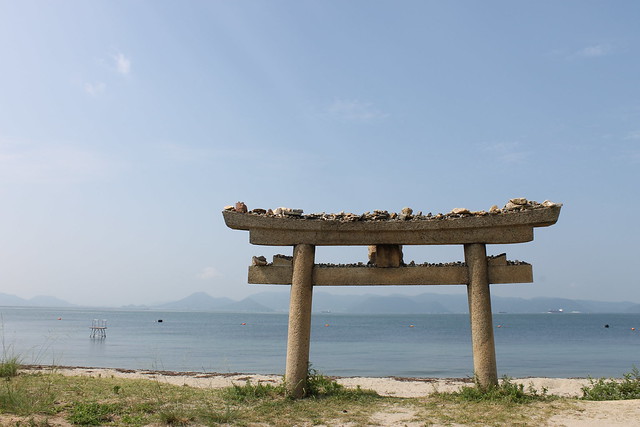 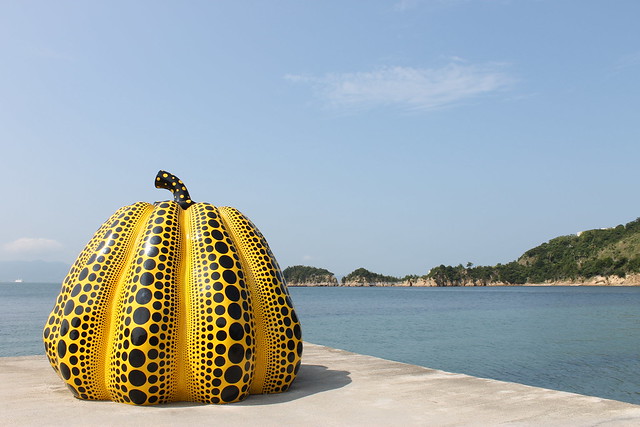 I wouldn’t actually be able to cycle up the hill that led to the Benesse Museum, as a security guard turned me away. Nevertheless, I  proceeded the rest of the way to the pricey museum on foot. Now I’m a terrible artist, but when I look at works such as a staircase leading to nowhere, an all blue canvas simply entitled ‘Blue,’ a heap of deteriorating wood and a set of completely bollocksed pots and pans – I often find myself quite confused. Am I actually looking at contemporary, innovative works of art – or pieces of garbage. Was that reaction though the point of contemporary art? If so, then I was missing the point, entirely. 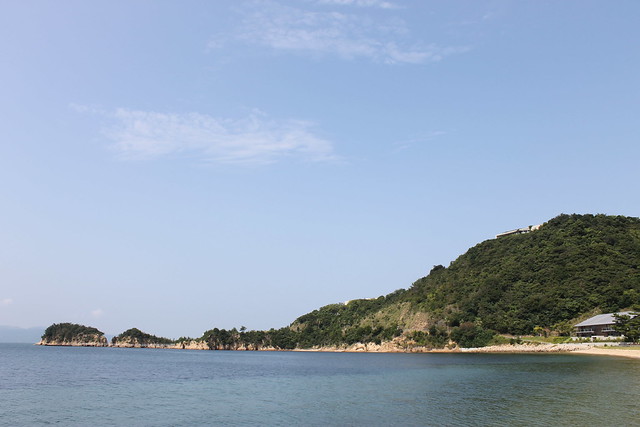 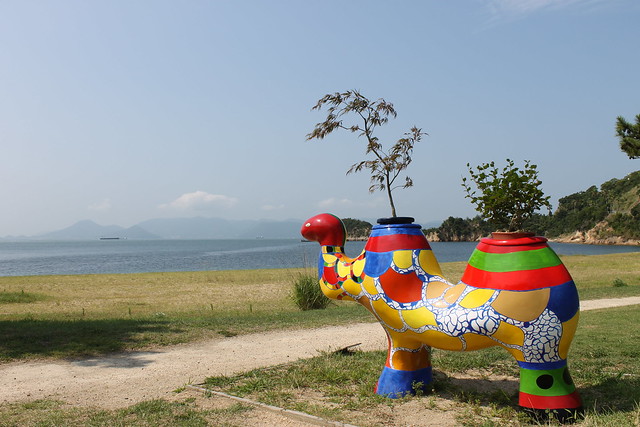 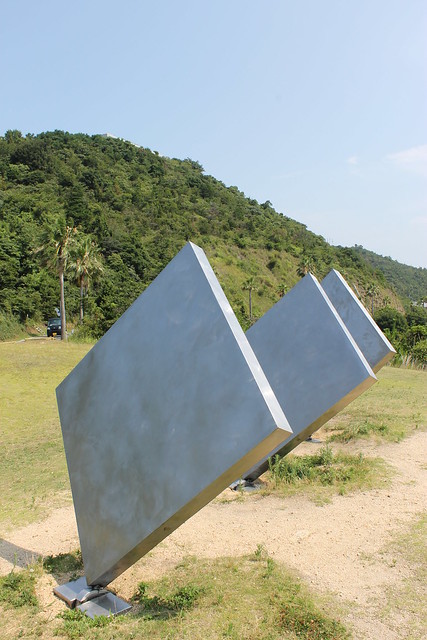 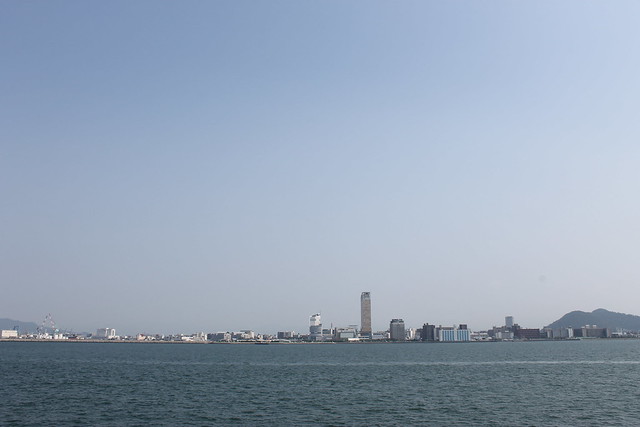 To head directly through the sparsely populated central mountains in the current heat seemed like a suicide mission; the coast would have to be the way to go. Coming down the gangway off of the ferry and onto dry land, my front brakes decided to fall to pieces; instantly draining any feel good vibes. In the melting sun, with a pounding headache, I stood aside the rather vulgar 151-metre high Symbol Tower, the apparent ‘Symbol’ of Takamatsu. It was there that I re-re-fixed my brakes and began to head east. 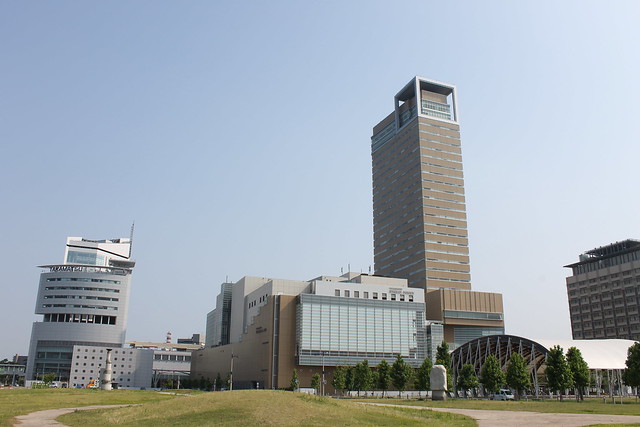 My mood then became really quite terrible and I began to feel extremely negative. Passing a shopping complex, I noted a cinema and saw that Godzilla was showing. To not watch Godzilla in the nation that spawned the great beast seemed to me like a great insult. And considering my rather charmless mood, I wagered that it might also cheer me up, somewhat. So… for some 2 hours, I sat in a cool darkness, mindlessly watching a modern-day telling of the King of Monsters. The carnage was strangely soothing, for a while, anyway.

When the film had finished it was dark outside, yet still as humid as hell. It was time to search for a stealth camp; my first in over a week. I cycled the coast for 5 miles, until I was on the fringes of Takamatsu. There I found a truckers’ rest stop; a number of big rigs lined up in a car park, whilst their engines chugged away idly, air cons blazing and cab curtains drawn. Come morning, the car park would be silent and littered with tissues and pornography.

Just to the side of the truck stop was a small park; a locked chain across its pathway entrance. Accidentally on purpose, I slipped through unnoticed. An out of service steam engine sat in the park, accompanied by a defunct station platform. Casting my eyes out to sea, a storm was well in the works, if it should head inland I would be sheltered. Satisfied with my find, I set up camp.

Sleep though, rarely came, the humidity too much to bear as I could scarcely breathe inside my tent. Unzipping the tent door, welcomed an army of mosquitoes. Zipping up again, I trapped a handful of the bloodsucking freaks inside with me, as I flapped about in the dark – in order to disperse them one by one. However, this activity was only making me sweat even more freely. When I thought that I’d finished with their extermination, I lay down to stew in my own juices. Breathing heavily, I felt that a meltdown was imminent. I closed my eyes.