‘WWWWWEEEEEEEEEEIIIIIIIAAAAAA!!!!’ another mosquito whizzed past my ear.

‘Right that’s it!’ I proclaimed. I’d had enough, I looked at my watch, 3:30am. But it didn’t matter, I was packing up camp, regardless; exhausted, angry and disgustingly sweaty.

I cycled a short way in the darkness, before deciding that it might be a good idea to do a video blog. Finding a reclining iron bench, I lay back on it, as if I was on some kind of medieval psychiatrist’s couch. There I fumed and rather bleakly talked about how the heat was beginning to get to me, wearing me down and demoralising me. I was actually very angry. And that after some four months on the road the notion that I didn’t actually have to be here was beginning to take a hold. What was I doing anyway? What the actual fuck was I doing? Who does this? To what end or cause?

I just didn’t have to be there, robbing myself of the luxuries of home with my great family and friends. Not to mention: a permanent roof over my head, an Xbox and a solid double bed with a mattress, a daily bath/shower, fish and chips, Melton Mowbray pork pies, Ben’s Cookies and my beloved West Ham United.

However, the fact of the matter was that I was there, doing what I was doing and I couldn’t stop – even if I really wanted too. I just couldn’t. The fuming did help though, as un-poetic as it was, it needed to happen. Watching the footage back, I’d somehow fall asleep with the camera on my chest, completely drained.

About an hour later, I awoke, with dawn just about to break I found myself covered in a new set of mosquito bites. Fuming, I packed my camera away, then bumbled bleary eyed and itchy over towards my bike. 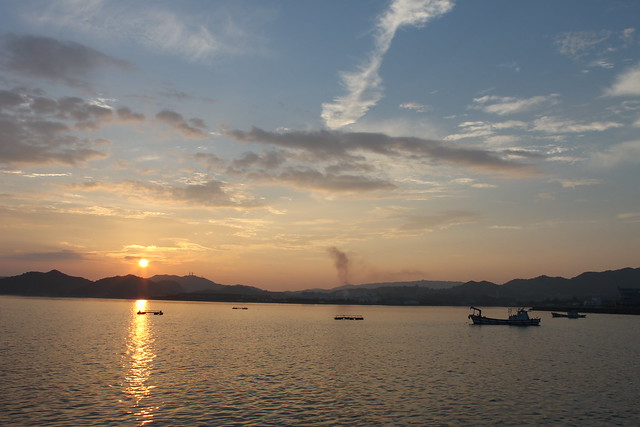 Encircling Shido Bay I was rewarded with one of the grandest of sights of being up so early. The sun was beginning to climb from the east, casting a delicate glow across the inland sea and outlining the rugged interior of craggy islands and islets. It was quite simply, beautiful. I tried a smile on for size, but it hurt. 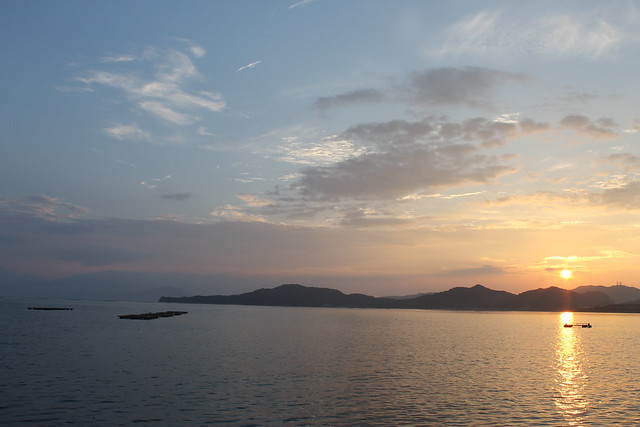 An elderly fisherwoman passed me by with a bucket full of crabs, an even earlier riser than myself, no doubt.

The moment calmed me and allowed that much needed smile to coax my face. Feeling more positive, I journeyed away from Kagawa, Japan’s smallest prefecture.

Total time in the saddle: 419 hours and 40 minutes