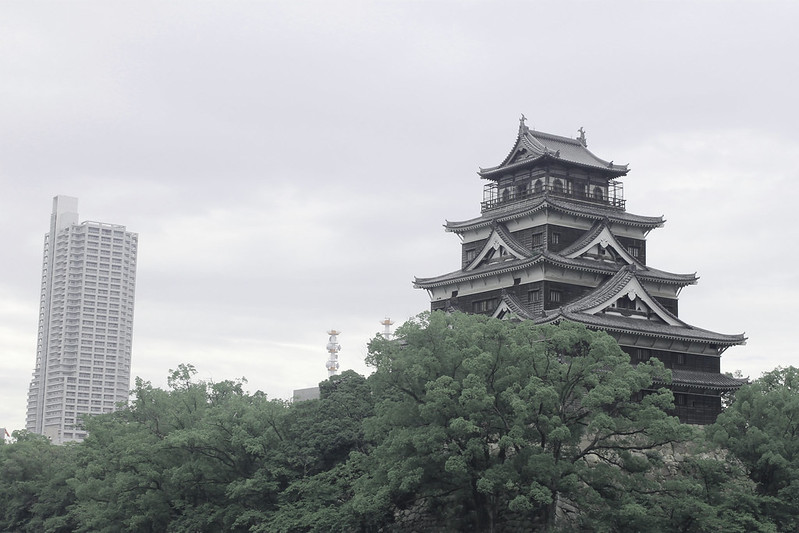 The day was uncomfortably muggy as I took the coastal road west to Hiroshima. The roads heavily congested bore me a number of issues. Punctures today came like buses, I received two simultaneously. I would also notice that the rear tyre had some wobble to it. Finding an inch of shade, next to a stinking toilet block infested with droves of red ants, I patched up my inner tube only to discover that my rear rim had split. It was of no surprise really, considering the abuse it had undertaken over the past several months. It had traversed nearly 4,500 miles, with over 100kg bearing down upon it every day. Essentially, this would just mean that a little shopping binge was in order when I got to Hiroshima. 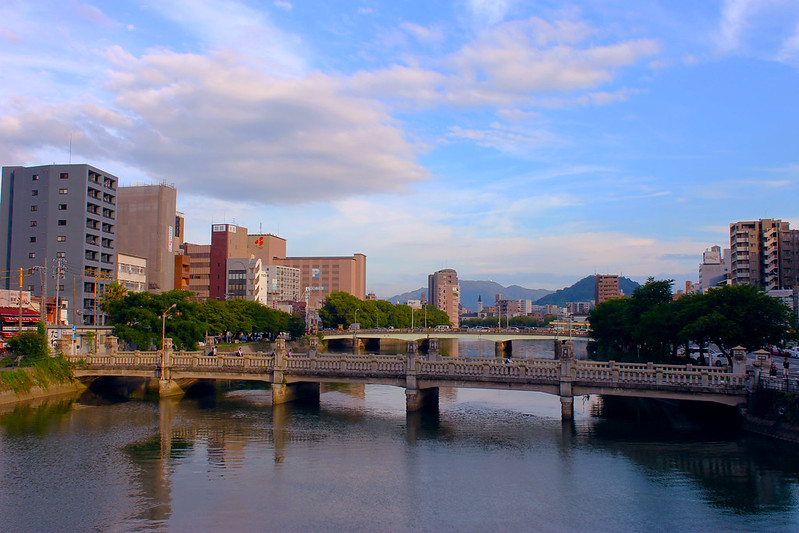 The roads became ever more clogged the closer that I got to the city, a city that largely imprints upon many a people’s minds when they think of the final days of World War II.

On the 6th August 1945, the American B-29 Bomber “Enola Gay”, would pass over the city of Hiroshima, from its crew of 12 men only 3 of them knew the real purpose of their mission. I cycled through the beating heart of the city, through a number of vibrant shopping districts, past okonomiyaki joints, karaoke bars and high-rise buildings. I sped along tree clustered boulevards, past a bustling train station and across a network of bridges that oversee many of the city’s six rivers that flow through it – all the time wondering how such a place could have virtually been wiped off the map.

‘My God, what have we done?’ were the words of Robert A. Lewis, co-pilot of the Enola Gay. For the Enola Gay carried what was known as “The Little Boy”, a weapon of mass destruction – an atomic bomb – the first of its kind to be used in warfare. 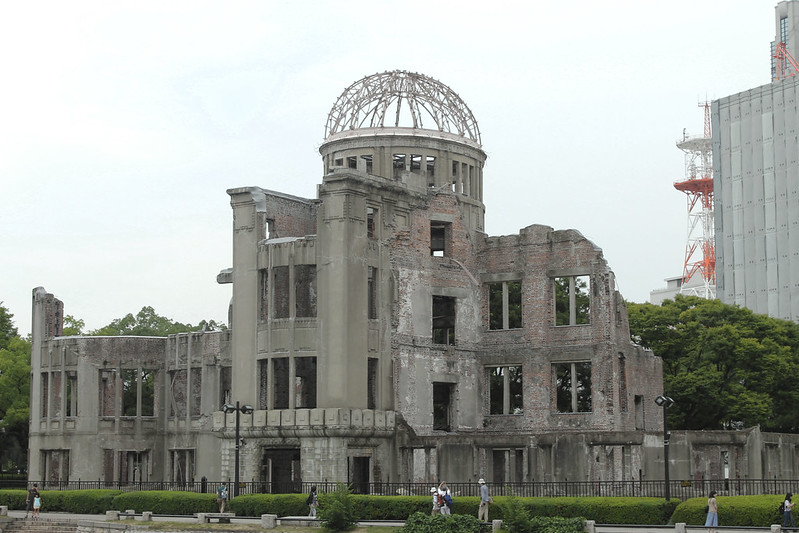 South-west of the train station I came face to face with a ghost from the past. People gathered around it in a morose silence, looking on reflectively as an eerie three-storied structure with a domed roof stood stoically before them; with a sort of dreary pride. Once known as the Hiroshima Prefectural Industrial Promotion Hall, an exhibition hall designed by Czech architect Jan Letze in 1915, it today stands for something quite different. The Japanese refer to it as the Genbaku Dome, but the International community knows it as the A-Bomb Dome. It acted as the hypocenter of the atomic bomb’s mass destruction. The Little Boy fell for some 43 seconds before packing a punch equivalent to 12,500 tonnes of TNT, a force so powerful that surrounding temperatures would rise to well over a million degrees centigrade – before burning up the surrounding oxygen and creating a fireball that would spread over a 1.2 mile radius. 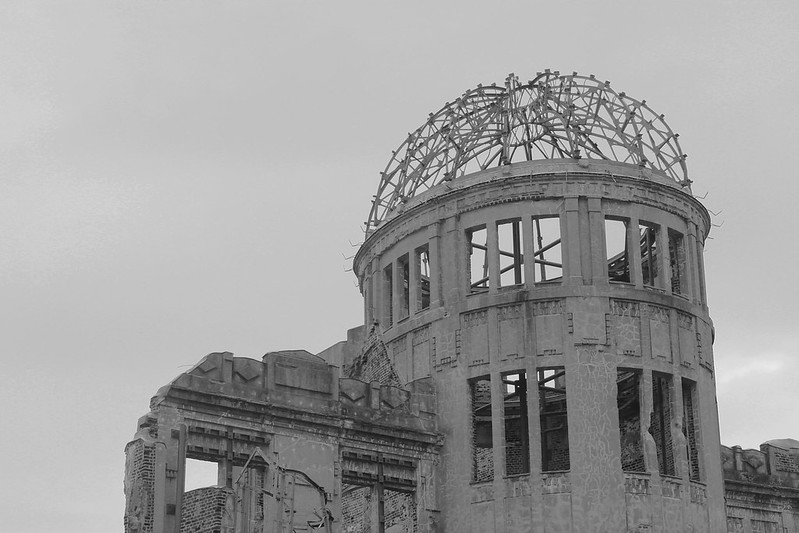 The bomb killed 80,000 people instantly, some becoming nothing more than a set of shadows singed into the ground.

69% of Hiroshima would be levelled, the A-Bomb Dome being just one of the few central buildings to withstand the blast. Structurally anyway, for the building today sits scarred with twisted metal, stripped brick work and caved in walls; a constant and haunting reminder of the evils of war. Today that is its exact purpose alongside the Peace Memorial Park and its historically important museum. 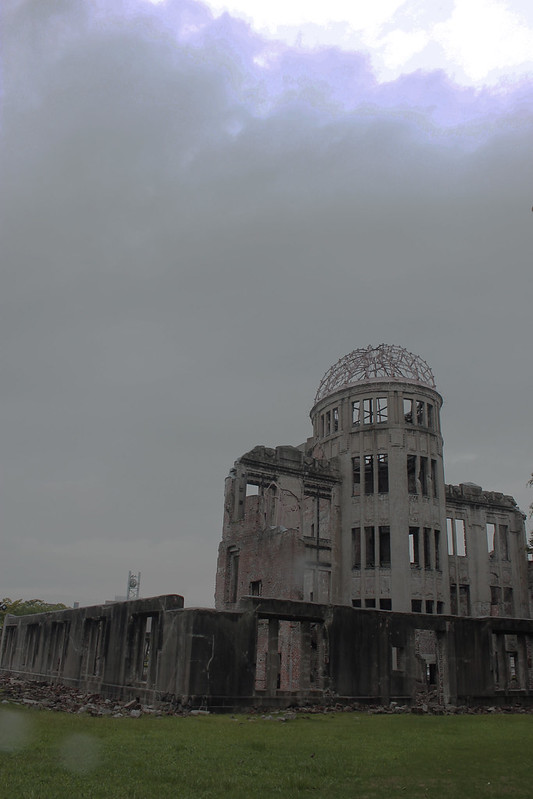 It was a sombre experience, one I would share with not only the Japanese but with people from all across the globe. It is vital that we all learn from the difficulties of our past, for it is the only way to head into a peaceful future. Seeing the pictures and video footage of the aftermath of the bomb in the Peace Museum – and moving around in today’s modern city of Hiroshima with its 1.5 million inhabitants – gave me a hearty feeling. A city once broken and condemned to tatters, and yet exactly 69 years and 1 day on, the city stands firm. Having defied the naysayers that said the ground would be wronged with radiation for years to come, the people of Hiroshima have created a very forward thinking, prosperous and cosmopolitan city. A city to be proud of and a city that I would come to know quite well. 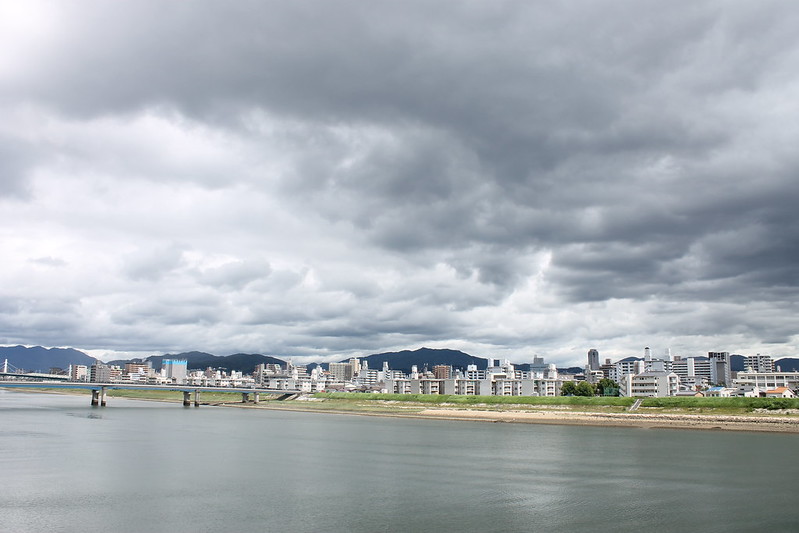 Having visited a bike shop in regards to my split rim (not as painful as it sounds!) I was told that they would have to get one shipped down from Tokyo which could take a few days. With that in mind – and a typhoon still fannying about in the Pacific, refusing to make up its mind – I would end up staying in the city for the better part of a week.