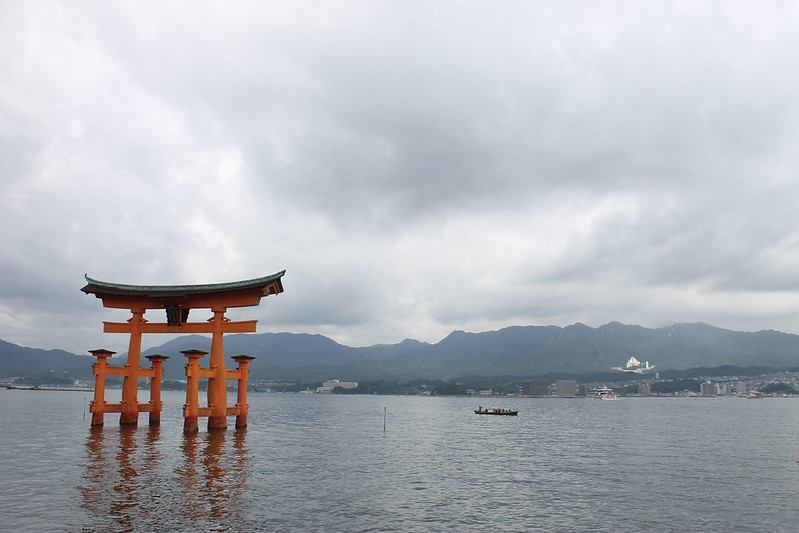 Typhoon Halong, which I had been bracing myself for, never made it to Hiroshima, a front of heavy rain passed, but a brunt of the storm passing up through Kyūshū and Shikoku, wound up heading east – colliding heavily with the Kii Peninsula where it would cause widespread damage to Wakayama Prefecture. The typhoon, killer of 10 people – soon weakened as it made way towards Siberia, where it would eventually fizzle out. Hiroshima wouldn’t fully escape the evil doings of Mother Nature however, as exactly 9 days after I’d left the city, heavy rainfall in the area would lead to a devastating series of landslides to the north, causing one of the biggest tragedies of the year – claiming 74 victims. 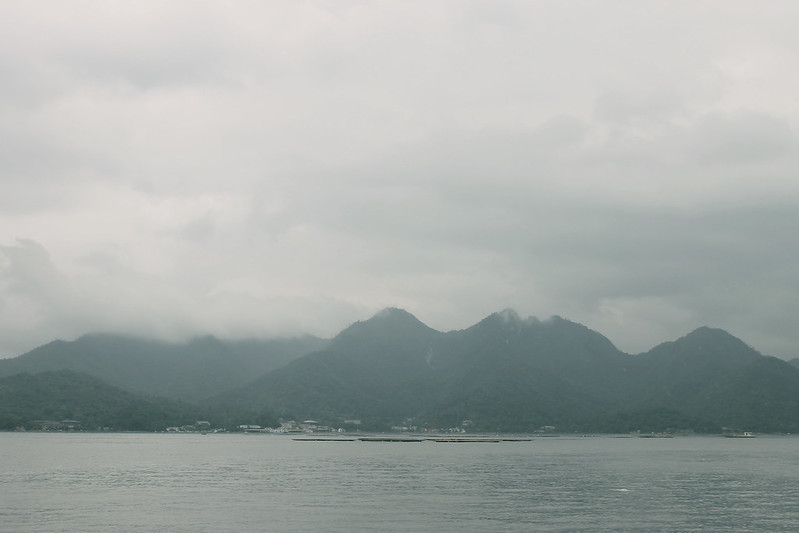 Today was dry and overcast; I was eager to finally get moving again, for tomorrow I planned to be on Kyūshū, Japan’s fourth main island. And with my new sparkly rim job (not as gross as it sounds!), a new tyre and a slightly expensive ‘Made in Japan’ waterproof odometer – with accuracy down to the millimetre and enough unnecessary functions to baffle the most constipated of tech-savvy whiz kids – I’d say I was more than equipped to tackle Kyūshū. There would be just one more main stop though, before I left Western Honshū for the penultimate time.

Miyajima, a small island just off the coast across the Onoseto Strait is home to the 16 metre high torii gate of Itsukushima Shrine. The gateway that climbs up prominently out of the sea gives the impression that the inland shrine – set a couple of hundred metres back – is floating, yet it is not. It is considered one of the ‘Three Most Scenic Views of Japan.’

Hopping on a ferry I travelled over with a heap of other tourists, cameras at the ready. Many of us had reason to be thankful, as it was once forbidden for commoners to even set foot upon the island. Despite that rule long ago being overturned, there are still a couple of others that stand defiant. No one can give birth or die on the island, both are deemed incredibly impure to the deities of the Itsukushima Shrine. Again thankfully, I had no plans to do either of these today. 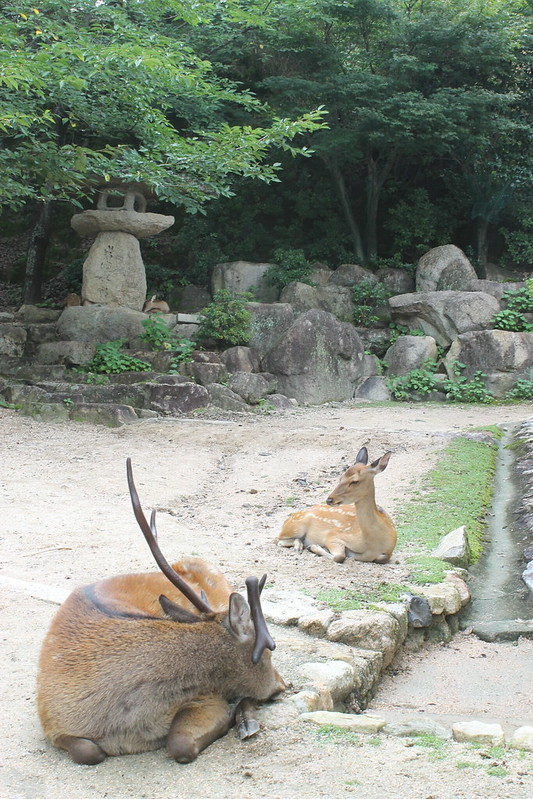 Disembarking from the ferry terminal, revealed a rather unusual spectacle. Walking amongst the humans were deer, completely fearless. The residential deer with no natural predators were seemingly living the lives of emperors and empresses. They had lost their affinity to the natural world and appeared to be at home with mankind. The deer only neared those who possessed nibbles though. Although the commoners are encouraged not to feed the deer, I feel that the animals’ overall cute factor more than outweighs any human’s morals. Mischievously, they rifled through unsuspecting handbags to munch on used tissues and lipstick, chewed people’s hair, pulled at loose fitting clothing and pestered pretty much anyone in their direct path. 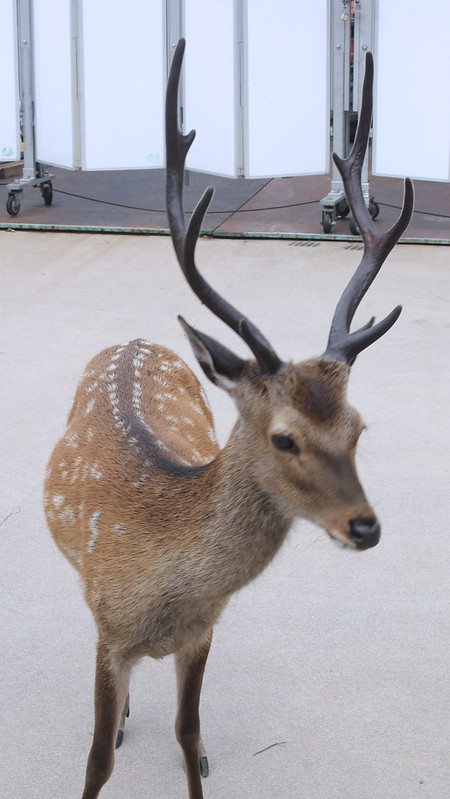 One small boy was reduced to tears as a deer had eaten his ferry ticket back to the mainland – the boy’s father told him that he would have to remain on the island forever! The boy, very upset, tried to kick out at the deer who made a hasty getaway. Many a commoner pointed at the small boy and laughed, it was great.

Muscling through the crowds, I got my all-important snaps, stroked a deer and then headed back to the mainland to saddle up. 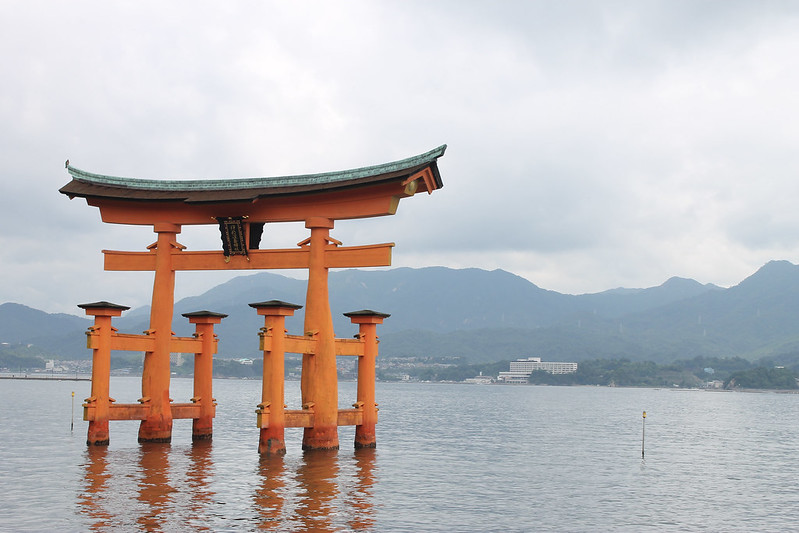 For the remainder of the day I’d traverse a shoddy road westerly, towards the considerably undesirable city of Shunan in Yamaguchi Prefecture. A prefecture I would have to visit again properly at some point in the future – upon my return from Kyūshū. Alas for just one night I’d find a park in the city to set up camp, my first stint of camping since that humid and restless night some 2 weeks previously on Shikoku.

It was still as humid as hell, but I had developed a new technique. Smothering myself in DEET and lighting two mosquito coils at the entrance of my tent, allowed me to spend the night un-pestered by the spawn of Satan – with the added allowance of some modestly fresh air. A Tom cat however poked its head in my tent at one point to see what was going on, observing me with disgust I snarled back at him sending the pervert scarpering back off into the night.

Come morning and I’d be getting the ferry to Kyūshū, but, for the moment, laying back upon my musky sleeping bag, I thought of my overall progress. Then I fell asleep with a gloating smile imprinted heavily upon my face.

Total time in the saddle: 459 hours and 38 minutes