Regardless of the Japanese public’s diminishing attraction to Miyazaki, it’s most famed prize of past and present, is Aoshima to the city’s south. A small island measuring no more than 11 acres, it is surrounded in a delicate white sandy beach and interior jungle, which attracts a bulk of the prefecture’s summer catchment of tourists. The island’s central shrine is said to bring good luck to married couples and those desperate souls looking for a spouse. 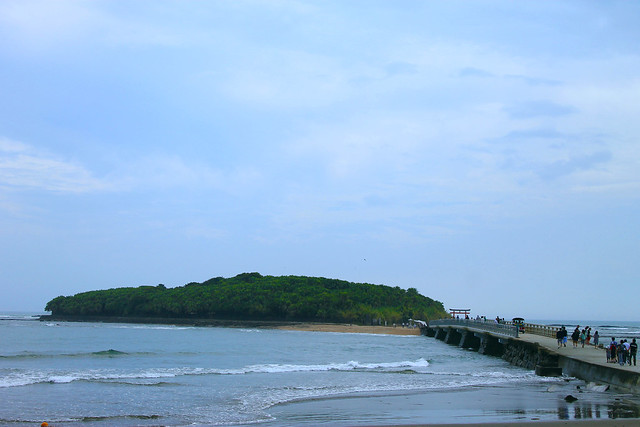 Walking the perimeter. I dared not venture into the thick of the jungle; visions of marriage putting about as much fear in me as a huntsman spider in my pants copping a squeeze of my priceless crown jewels. No thanks fella, not today. 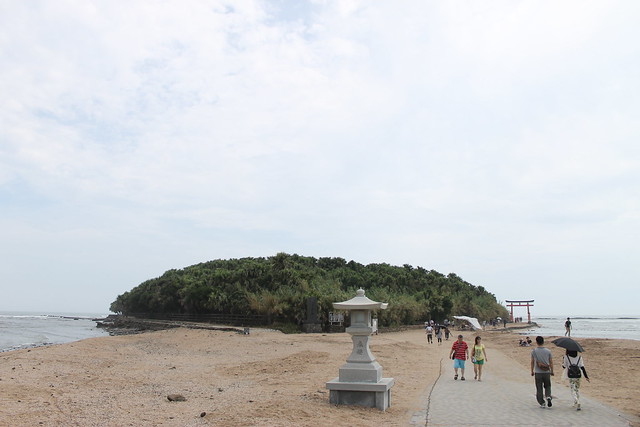 And in not paying my respects to the shrine, I would become instantaneously cursed. Less than a mile away from the island, I received a puncture to my rear tyre. Under the shade of an overpass, I patched up the hole and then proceeded west into the mountains. Another puncture happened, 6 miles later! In the car park of a 7-Eleven, I would again fix up another hole in the rear tyre before continuing.

Just 3 Miles later – whilst ascending a steep mountain – puncture number 3 struck. In general disbelief, I began to unload my rig in order to get to the rear tyre once again. On the hilly incline, by the side of a busy road, with a complete lack of shade, the sun beat down upon me maliciously. I became saturated in sweat, making the task in hand all the more difficult. I angrily ripped off my wet-rag of a t-shirt, and threw it to the ground in an act of provoked frustration. A car pulled up whilst I was in the process of assessing my inner tube, and a man reached out and gifted me two ice cold bottles of pocari sweat – a popular nationwide isotonic drink. This act of kindness soothed me somewhat.

Returning to the inner tube, I came to the conclusion that it was completely fucked, so I whipped in a new one and ventured onwards with caution. Yet this was to no avail, as 4 miles later another puncture decided to join the party, this time at the front.

‘Un-fucking-believable!’ I yelled, jumping off my bike and lobbing my crash helmet across the road in a strop.

I felt truly cursed, finding it bizarre that I’d managed to cycle for some three months at the beginning of my journey – receiving just the one puncture – and yet today I had traversed little over 15 miles and received four! Rotating the tyre, I noticed a big fat drawing pin embedded into it, a true classic. I wondered if I should have gone to visit the shrine on Aoshima, after all. Alas it was all too late to turn back now, the only way forward being westward in the direction of Miyakonojo. 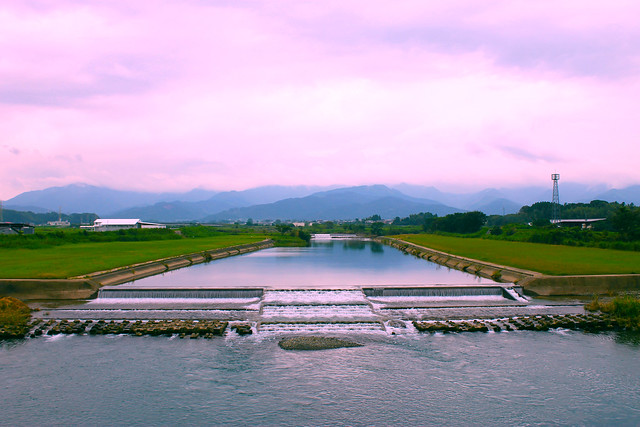 The rest of the day’s journeying would go without incident and by the time I’d pulled into Miyakonojo, my puncture grief was behind me; a distant memory from a questionable curse. My arrival in this border city (with Kagoshima Prefecture) was somewhat fluky, as the heavy rain and thunderstorms that had been due all day, were now just about gearing up to play their part.

I tracked down a Californian by the name of Seth and would become his first Couchsurfing victim in Miyakonojo, a city famed mostly for producing traditional archery bows from the area’s abundant resources of bamboo.

Our greeting was short and sweet, for Seth had big plans for us. After I’d showered, we headed over to a local izakaya, there I would meet a vast contingent of his international English teaching counterparts. It being a Friday night – and the end of the schooling week – it seemed only natural that they should all get bladdered and talk utter smack, and that I too should become part of that said process.

Outside, an indignant yet fantastical storm unfolded, as thunder shuddered through the very foundations of our surrounds. A vast congregation of lightning bolts blitzed the skies; one bolt cracking off so loud and so close that it would make everyone inside the izakaya scream out like a bunch of end of day’s mentalists. The rain soon flooded the streets, as, like my new found friends, I drank deep into the night.

I awoke with little memory of the night before. A notion that I’m led to believe is how any good solid drinking session should be orchestrated. It was nice to be part of these relatively normal transactions from time to time; the pressures of the road being eased somewhat by partaking in the traditional art of going down the boozer for a skinful and talking a pile of absolute dross. Even if the time spent was with complete strangers – it just didn’t matter. That night we had a distinct narrative and purpose, and what better place to exploit that than down the pub.

Total time in the saddle: 486 hours and 47 minutes