It was a steady rise up into the Kirishima mountain range, away from Miyakonojo, where I would shortly cross into Kagoshima Prefecture.

Gliding down toward Kagoshima Bay, which nuzzles itself in between the prefecture’s two peninsulas of Satsuma and Ōsumi – I saw the symbol of Kagoshima filling a triumphant void between the surface of the bay and all the way up some 1,117 metres into the troposphere. 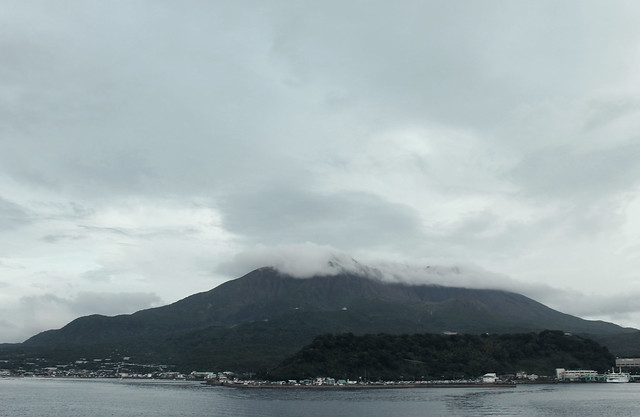 I’d seen a number of volcanoes on my travels now, but the sight of Sakurajima was a striking one; an image that somehow I hadn’t quite prepared myself for. As from the exact moment that the gigantic mass of rock hit my line of sight, it would give me something of a mental jolt. ‘Woooaaaah!’ I’d proclaim, doing my best Bill & Ted impression. Sakurajima is considered one of Japan’s most active volcanoes, averaging some 500 or so eruptions every year; in fact my previous night’s Couchsurfing host, Seth, said that he could often hear and feel it rumbling away some 40 miles away, in Miyakonojo. The last major eruption though was back in 1914 and it was so big that it ejected enough molten material to connect it from its locale as an island in the middle of Kagoshima Bay to the eastern peninsula of Ōsumi. Deaths are rare from the eruptions of Sakurajima, but throughout the year, the locals of Kagoshima City will have to contend with the vast quantities of falling ash emitted from its vibrant crater. The ash blocks out the sun and turns the skies grey, as it falls down upon the streets like a nuclear winter. The surrounding streets often have to be ploughed as the citizens don umbrellas to protect their skin and clothing from the hot ash. Yet, for the local farmers, this comes as a prized gift, for the ash makes their lands extremely fertile – enabling the production of some freakishly huge, radishes. I picture the farmers walking around the countryside stroking their prized veg like beloved pets and mocking neighbouring prefecture’s for their ridiculously insignificant sized radishes. You call that a radish? Now – this… is a radish! Today however, Sakurajima was on its best behaviour. Cycling from the north around the glistening bay – towards the city of Kagoshima – ensured that the great beast would never leave my sights. A sick part of me wanted it to blow its molten load, just so that I could boast about it to my friends on the booze-scene back home down the pub. Shit! To witness something as raucous as that may well have just seen me well on my way to a free packet of pork scratchings, or better still, a rimjob in the pub car park from a human! Alas, Sakurajima would contain itself, there would be no full English rim-jobs on my return to Blighty. What a shame. With its prominent volcano and enchanting bay-side setting, the city of Kagoshima is often referred to as the “Naples of the East”, being largely similar to the famous Italian city with its prolific Mt. Vesuvius. In fact, the two cities joined forces in 1960 to become sister cities. 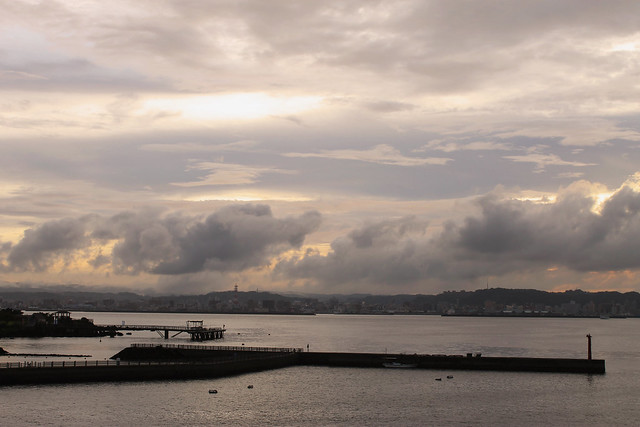 Upon my arrival, the wide city streets were bustling with activity, serving up a positively flamboyant vibe. I had arrived during the Obon festival period, where families gather across the country to pay respects to the spirits of the dead. Amongst the festivities, lanterns are lit to help guide ancestral spirits in the afterlife. Graves are scrubbed clean, dances danced, food gormandized, alcohol guzzled and massive wads of fireworks are simultaneously spunked into the night skies. Because of the festival, I’d had trouble securing any accommodation, so opted for an Internet café – in the city’s outer suburbs. This would set me in a good stance for progressing along the inner thigh of Satusuma Peninsula, the following day. From there I planned to take a short ferry ride across Kagoshima Bay to the neighbouring Ōsumi Peninsula – as I advanced ever closer to Cape Sata, the southernmost point of Japan’s four main islands.