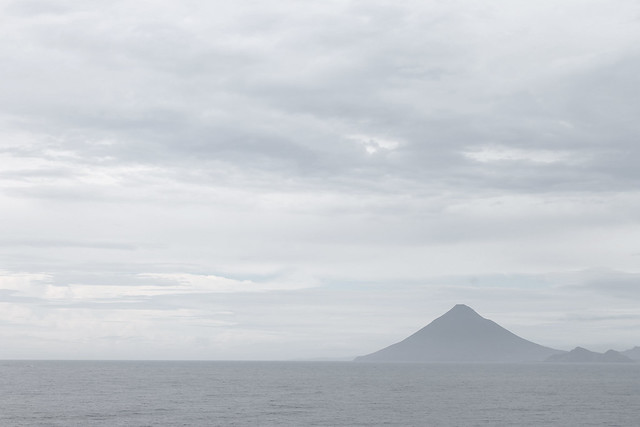 I trailed southerly alongside the shores of Kagoshima Bay, its lilac blue waters as calm as a grave. Reaching the tourist resort of Ibusuki, I would round Mt. Uomidake, its cliffs rising abruptly from the road side. The sun shone so brightly that I could barely look up towards its summit without wincing. Farther inland a wilderness of greenery spread itself across the mountains and far beyond the natural sight of any man.

Many flock to Ibusuki for its famed sand baths, where natural steams rise up through the volcanic soils, warming the surrounding sands and offering up an alternative therapeutic option. People here will be buried up to their necks in the sand, leading them to perspire  excessively, the act said to enable good blood circulation. Yet, in the current climate of 33°C it seemed about as necessary as a kick in the bollocks before bedtime.

Veering on towards the Yamagawa ferry terminal, I made the crossing over to Minamiosumi on the Ōsumi Peninsula. The crossing gave me scope of the land that lay between myself and Kyūshū’s most southern limit. A jagged backbone of mostly uninhabited mountains sprawled for just over 20 miles; resembling the spine of a sleeping dragon. Reports online invariably dictate that the ride from Minamiosumi to Cape Sata is a testing one, and from the middle of the bay it most certainly looked it. 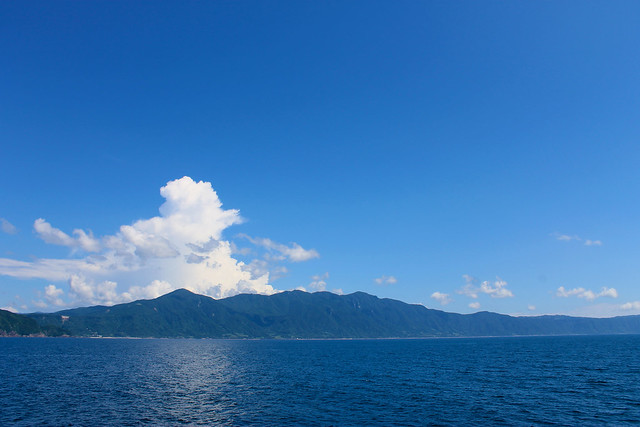 I wouldn’t have enough time to tackle the 40 mile round trip to Cape Sata upon my arrival in Minamiosumi, and so decided to spend the night in town. The only hostel was fully booked, so I opted for a small coastal park close by. Under the shade of a concrete veranda, I washed down with some wet wipes and then proceeded to set up camp for the night. The plan the next day was to rise early, in an attempt to beat the heat, which as always would try it’s very best to dampen my spirits. But only if I let it, as with my heart still beating, I knew that it would take a lot more than just weather to stop me now.