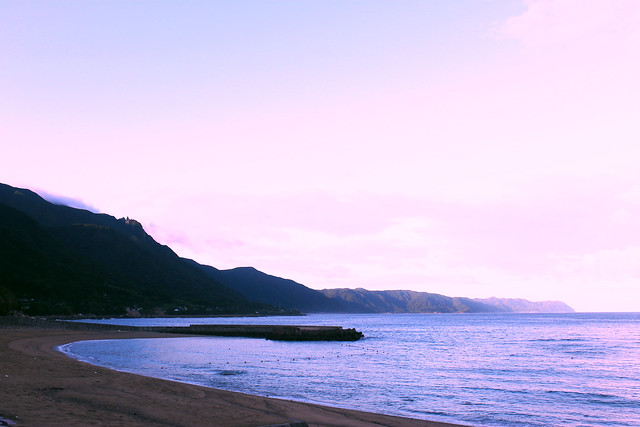 A storm passed through during the night, bringing with it a heavy bout of rain, yet come morning there was little evidence left; the sun casually baked and dried up all traces of damp within its sight.

Leaving camp at around 6:30 I convinced myself that I was getting used to the heat – but, even so, I mumbled and cursed my way up into the mountains along a jaunty rollercoaster of a road. The route was quiet and traffic free; the deep impenetrable jungles to the sides of the road saw macaques clinging to palm trees and eyeing me wearily as I passed. Cicadas occasionally burst into chorus:  ‘die, die, die…,’ as ample numbers of dragonflies darted past en masse, looking for a mate. 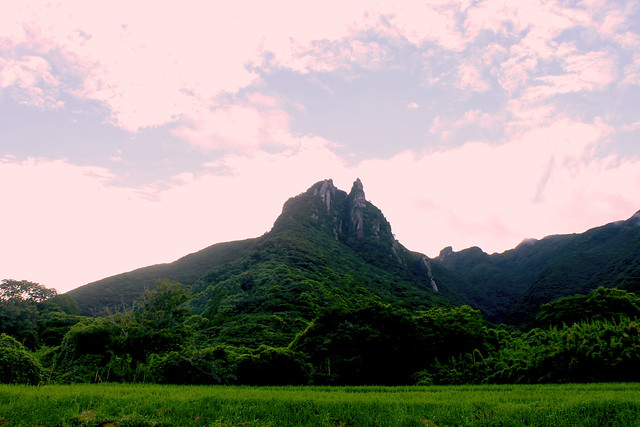 In just over 2 hours I made it to the car park of Cape Sata, from here it was just a short walk to the Cape itself. A lonesome lighthouse about 500 metres off shore sat perched atop a rugged islet, beyond it a vast blue void. I’d made it. And in doing so I’d set myself a new milestone. It had been just a little over 2 months by this point since I’d left the country’s northern most point of Cape Sōya, in Hokkaidō. The 3,050 miles felt like a very, very distant memory. So much had happened in the time since Hokkaidō. The adventure I’d always dreamed of, had become a priceless reality, one that I wouldn’t have changed for anything. But it was all still far from being over. For many this would be the end of a long and successful journey from the country’s distant northern reaches, yet for me I still had 16 more prefectures to conquer in order to fulfil my goal. Feeling like a pint was in order, I turned my back on the Pacific and began the journey back to Kagoshima City, where it would most certainly be beer ‘0’ clock upon my arrival. 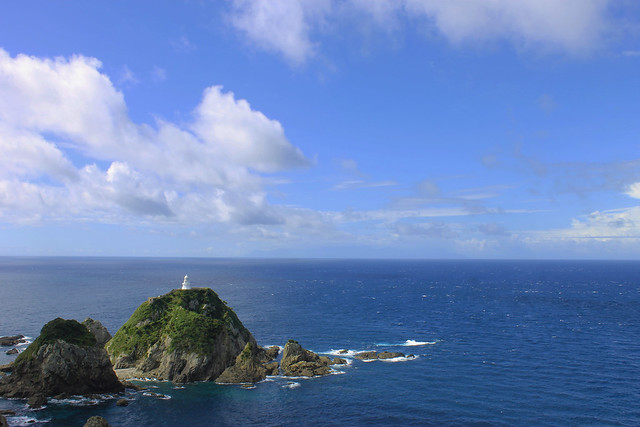 Descending away from the Cape, I’d traversed merely 300 metres, before I noticed the tops of the palm trees that towered up around me swaying precariously. Cloud cover had also increased, as loose vegetation began to flitter across the surface of the road. As I rounded a bend, I was offered a view out to sea, an overly uninviting view. The skies were grey, merging into black and I could see a band of white spray at the forefront that was heading ashore in my direction. There would be nowhere to run and nowhere to hide.

I continued to peddle, hoping that the oncoming weather front might just skirt around me. Sadly, I was headed uphill on at least an 8% gradient and thus escape was futile. In mere moments, a gust of wind groped me from behind as a front of hard hitting rain succeeded it, lashing down furiously around me. It was freak and unexpected, considering how roasting hot it had been just a few moments previously. 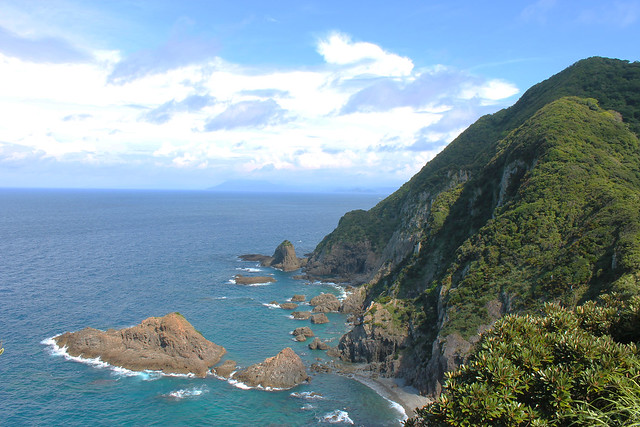 The polarities of the Japanese weather were a constant. Whilst traversing the country, I had heard people comment on the fact that the weather had been behaving very strangely this year – and they most certainly weren’t wrong.

Pulling over to the side of the road, I was able to take up some minimalist cover from an overhanging tree branch. The rain continued to gush down violently for a further 4 minutes, before suddenly petering out like someone had just quickly turned off a tap. The sun then appeared from out of the grey as if nothing had ever happened! Steam in turn rose up from the asphalt surface, as the water upon the road began to burn up instantly. Welcome to the sub-tropics.

To get back to Kagoshima, I again made passage alongside Kagoshima Bay, this time upon the opposite peninsula which would lead me all the way up to the southern base of Sakurajima. En route, I was pulled over by a pair of very serious looking plain clothes police officers. They showed me their badges and asked to see my passport. I did as I was asked. One of the officers spoke in pitch perfect English, with an American twang; much to the awe of his non-English speaking partner, who studied me up and down very carefully. The English speaking officer asked me what I was doing and where I was headed. He seemed quite impressed with my answer, as he translated this to his partner, who smiled. I was overjoyed to see them both smiling, as I had been wondering what it was that I might have done wrong. I asked the officer if everything was okay,  and he confirmed that they just wanted to let me know that there are a lot of crazy drivers in Kagoshima Prefecture. It was then that I realised that I wasn’t wearing my crash helmet. Quickly, I reached around to the rear of my bike and unclipped it from my baggage and proceeded to place it upon my head. Both officers found this act side-splittingly hilarious as they laughed directly at me, before wishing me a safe journey, in Japanese.

I was thankful for the concern from the officers, even if it was a case of one cop showing off his English skills to the other cop. I had actually noticed an increase in stunt driver wannabes within the area. On at least eight separate occasions I would nearly find myself maimed by victims of bicycle blindness. A majority of the incidents, like the incident back in Miyazaki, stemmed from people pulling out of junctions and looking directly through me – as if I was nothing more than an apparition. Being Obon weekend, I wondered if the locals thought that I was the spirit of a gaijin cyclist, but I doubted it. Regardless, I felt as if I needed a new approach to these drivers to make them more aware of their bicycle blindness condition.

Through the power of eye to eye contact surely it would be possible to relay a psychic message between cyclist and automobilist, thus making them completely aware of my presence. As it happened, it wouldn’t take me long before I got to try out my new experiment. An aged lady, driving a purple monstrosity, approached an upcoming T-junction onto a section of road that I was about to pass. I began to look directly at her. Correctly slowing down for the junction, she looked to the right, in the direction that I was coming from, and appeared to look directly through me. It was only when I branched my neck out a little further, converting my stare into something a little more in line with an obvious glare – that we were then able to lock eyes. A connection was thus made. And as we stared into one another’s eyes, I felt a mutual bond of recognition formulate between us. Almost spiritual. I smiled as she smiled back, surely sealing the deal.

For her, I was in existence in real time, and this was exactly what I wanted her to think. The very idea of her pulling out on me now would surely defy logic, in every possible sense. However, she pulled right out on me, regardless, nearly killing me. Miraculously, my split second swerving into oncoming traffic and then bumping up onto the sidewalk on the opposite side of the road would save me from the jaws of death. Eye contact obviously wasn’t the answer to this beefy conundrum.

As I approached the foothills of Sakurajima, rain began to set in; the volcano’s summit was swathed in gloom. The ground around the mountain’s 30 mile base was strewn with dispensed ash that, under the rain, was turning into black, gooey sludge. My lack of mud guards saw to it that I was getting rampantly caked in the stuff, and by the time I’d reached the ferry (that would take me across the bay, back to Kagoshima) I looked like I’d just crawled out of an old bonfire.

The crossing back to Kagoshima took a mere 15 minutes. And as the rain got heavier, I was relieved to have found myself a hostel for the night. Settling under a sheltered balcony, with a pack of beer, I watched the rain crash down in torrents over the city. I found myself devoid of thought, with very little worrying me, and that felt good. 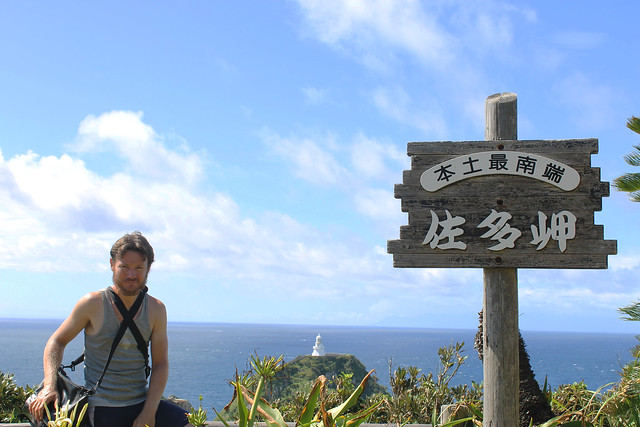