As nightfall approached, any preconceptions about being stuck in the mountains after dark, were countered by finding the remote, backwater onsen town of Yunotsu. Up until the 17th Century, Yunotsu was used as a port to transfer silver, harvested from one of the country’s biggest mines, the Iwami Ginzan. The tradies used the town as a place to rest up and recoup as they went about their working lives. Today, mining has long since ceased in the area, yet the town’s quaint streets are a testament to time; remaining somewhat untouched by the onslaught of the 21st Century. There you’ll find a number of old-fashioned ryokans and bathhouses. 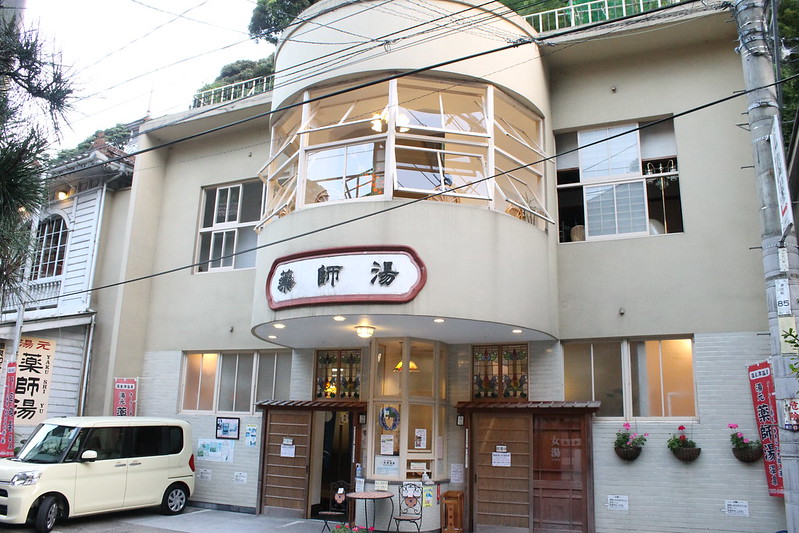 I brought my bike to a halt outside one such bathhouse; a building dating back to the Meiji-era, known as Yakushiyu. I could hear the splashing of water inside, which made me exceedingly happy; my body really needed this. It had been a long few days in the saddle with nothing but wet wipes for comfort; my body odour becoming so intense that I would have no doubt been able to scare a corpse back to life. A middle-aged Japanese lady came rushing out to greet me, as I went about securing my bike. She probably regretted coming over to me, upon catching a whiff of my putridness. She smiled though, before giving me her business card and, in excellent English, invited me into her bathhouse. The onsen was a small yet cosy affair. As I submerged myself in its scolding hot, mineral rich waters, not only was I cleansed of the filth of everyday life on the road, but I was also pretty certain that the hot spring had eradicated some past sins too. After bathing for 3 minutes and 24 seconds, I rested on the building’s third floor, where I helped myself to tea, before nearly falling asleep in an overly comfortable arm chair. Feeling drained, I begrudgingly scooped myself up and ventured back out on to the far from mean streets of Yunotsu, to look for somewhere secretive to camp my clean white ass. As I was cycling along the chillingly quiet streets, an elderly lady emerged from the shadows on her squeaky mamachari. She stopped to talk to me, as we drew closer to one another, then she asked me where I was headed. I said some place close to the nearby lake – to camp. Instinctively, she offered me a bed at her home, but I felt it would be too much to invade her home at such short notice; also my head was completely dead… so, to converse in Japanese at such a late hour would have probably killed me. I confirmed that I’d be all right, as I had my camping gear with me. She then pointed in the direction of a tourist information centre – which was now closed for the night – but it had toilets and a small yard. These facilities were right next to the lake’s harbour, where I’d be able to camp for the night. I thanked her kindly for her information as she cycled off into the darkness; the eerie creaking sound of her aged bicycle slowly dissipating into the night. 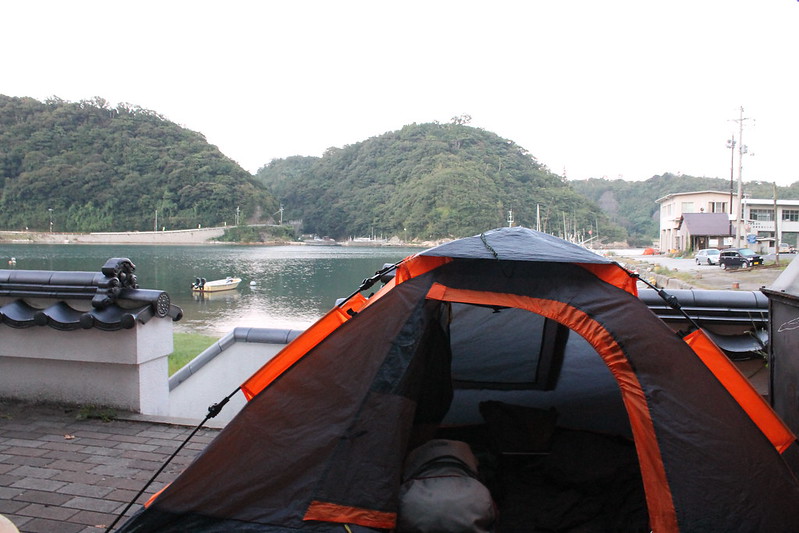 Upon finding the tourist information centre, I discovered that I wasn’t alone. Another tour bike was propped up against the outhouse. Poking my nose inside the toilet area, I saw a man lying down, snoring away to himself contentedly. I tiptoed around him and brushed my teeth, did a couple of secret farts and then went back outside to set up camp for the night.